Jennifer O’Connell: Men, keep your wandering hands to yourselves

Unless you’re administering CPR, there’s really no need to get handsy with women you barely know 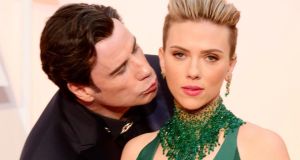 Actually, let’s try that again. Dear John, Joe and anyone else out there in need of a refresher on the subject. There’s a certain etiquette to the invasion of another’s personal space, particularly when that space belongs to someone to whom you are not related by blood, marriage or consensual romantic endeavour.

That etiquette might be summarised as follows: unless you need to administer CPR or have verifiable evidence of the existence of weapons of mass destruction about their person, don’t do it.

It’s unclear if John Travolta or the US vice-president Joe Biden ever saw Dirty Dancing. It came out in 1987, when Biden was working himself up for his first bid for the US Democratic presidential nomination and Travolta was getting together with Kelly Preston, so it’s possible they were both preoccupied (although I like to think Travolta might have dragged Kelly there on a date). In the film, the late, great Patrick Swayze offers up a useful primer on what we’ll call the “handsiness” to which both men have lately shown themselves susceptible. “Look, spaghetti arms. This is my dance space. This is your dance space. I don’t go into yours, you don’t go into mine.”

How wonderful would it have been if Scarlett Johansson had turned to Travolta on the red carpet at the recent Oscars, when he was pawing greasily at her green Atelier Versace gown and doing a Nemo impression on her cheek, and said, “This is my red carpet moment. Yours was in 1994. I didn’t go into yours (I was home playing with my Furbys), so don’t go into mine.” Or if Idina Menzel had playfully mispronounced his name as “spaghetti arms” while she wrestled free of his clutches.

But they didn’t, any more than Stephanie Carter instructed Joe Biden to keep his meaty, vice-presidential hands to himself when he decided, unprompted, to rest them on her shoulders (for a full 28 seconds) at her husband Ash’s recent swearing-in as US secretary of defence.

Instead, Carter, Menzel and Johansson did what women have been doing since the beginning of time when confronted with a handsy man. They plastered a rictus grin on to their face and bore it. Afterwards, Johansson turned to Travolta and gave him a wide smile. But her initial reaction was the one that spoke volumes; it was just as eloquent a response to the culture of sexism in Hollywood as Patricia Arquette’s speech on pay equity.

Most men, it should be said, don’t go around massaging the shoulders of women they barely know. And yet, almost every woman has experienced some form of unwanted handsiness, from outright groping in clubs and pubs to the uninvited hand on the small of your back at work functions, to the unnecessary grip on your elbow in crowded places.

Why do most of us quietly put up with this? Why is our first reaction not to turn around and administer a sharp elbow into the nearest available bit of tender male flesh? There are all sorts of reasons: embarrassment; fear; the desperate female need to not create a scene; the fact that, since we were barely out of puberty, society has been bombarding us with the message that our bodies are public property, and so we have come to regard allowing our knees, waists and bottoms to act as resting places for unfamiliar male hands as an act of civic duty.

Since we’re not in the business of victim blaming, the more relevant question is why some men feel entitled to paw at the bodies of passing females. Actor Jeremy Irons said in an interview a couple of years ago that any woman “worth her salt” should be able to take a pat on the bottom. “It is communication,” he postulated. Which is fair enough, if you’re a dog.

Is it intended as some kind of primal display of power, the human equivalent of a gorilla thumping the ground? Or is it simply that these men don’t realise that, rather than being charmed or made to feel special, uninvited touching makes most women deeply uncomfortable?

If so, here’s a piece of advice to all the Johns, Joes and Jeremys out there. Take a look at the faces of Carter, Johansson and Mendzel. See that expression they’re wearing? That’s not the face of a woman who is feeling charmed or amused. That’s the look of a woman who would like to take you by the hand and stick a pin, one by one, under each of your fingernails.