Parents can believe what they want, but if it endangers the health of others, society must act 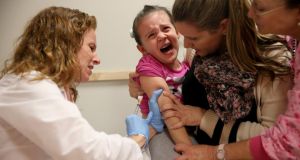 It has become a question that parents here in California now routinely ask, eyeing one another over their non-fat cinnamon dolce lattes, while they adopt their best faux-casual manner.

“You vaccinate your children, right?”

No one is fooled by the casual tone: right now, this is anything but an idle query.

The state has become a lightning rod for the debate about vaccinations gripping the US. The reasons are twofold. California is one of a minority of US states that allows unvaccinated children to be enrolled in public primary schools, if the parents sign a form to the effect that childhood immunisations are contrary to their personal beliefs.

Until now, any debate on this has been largely academic. In 2000, US health authorities declared measles eliminated (a remarkable achievement, given that there were 1,603 cases in Ireland that same year).

But parents got complacent and vaccination rates began falling, and there were more than 600 cases of measles last year. The recent outbreak at Disneyland in LA – which started on December 28th, when a young woman fell ill and infected at least 39 people – has forced the issue of whether the “personal belief exemption” should be abolished back on to the agenda.

In one of those peculiarly first world ironies in which California seems to specialise, this is in some respects a class issue: typically, the wealthier the suburb, the lower the vaccination rates. According to a Los Angeles Times study last year, more than 150 schools have exemption rates of 8 per cent or higher for at least one vaccine. All are in areas with incomes averaging $94,500.

In some areas with low vaccination rates – such as the knit-your-own-hemp capital of the west coast, Marin County, where 6.5 per cent of children in their first year of school are unvaccinated – barely concealed hostility has broken out between parents of children who have been immunised or are too ill to get their shots and those who have intentionally opted out.

Much of the debate is playing out on local radio and Facebook, with angry debates about whether unimmunised kids should be barred from school and other public places. Some doctors are refusing to treat children who are unvaccinated. On the other end of the spectrum, the California public health department last week issued a warning to parents in the area not to hold “measles parties”. (If measles parties sound completely insane, consider this: in 2011 authorities issued equally stern warnings following reports that anti-vax parents were trading chicken pox-laced lollipops by mail.)

It might be tempting to snigger at what could be perceived as an over-the-top reaction to illnesses that we all suffered from as children. But maybe Ireland – where vaccination rates hover at about 92 per cent, below the 95 per cent figure the WHO says is needed to eradicate the virus – has something to learn from this debate. Measles, despite what the anti-vax campaigners insist, is not headlice: it is not a benign childhood illness. For every 1,000 cases of measles, one or two people will die; even in the furthest reaches of internet hysteria, you would struggle to find anyone making a similar claim about the vaccine.

Oh, and forget Ebola; this is a truly aggressive virus. Put 99 unvaccinated people in a room – or in this case, a theme park – with one who has measles, and within three weeks, 90 of them will become ill.

On the other hand, the risks of the vaccine are small. One in 3,000 patients will have seizures and one in 30,000 will develop a blood disorder. But although Andrew Wakefield’s 1998 paper linking autism to the MMR vaccine has been utterly discredited, the notion that pharmaceutical companies are callously risking the health of helpless children in pursuit of profit has proven irresistible to a particular kind of individual.

But if their beliefs mean other people’s health is endangered, society needs to take action. California lawmakers are now considering abolishing the “personal belief” exemption. Maybe it’s time Ireland did the same and insisted that all children enrolling in primary school provide proof that they are fully vaccinated.

If the State’s Catholic-run primary schools can require baptismal certs, immunisation certs shouldn’t prove too much of a stretch.

Catholic schools in San Francisco are at the centre of a showdown between teachers, students and the Catholic archdiocese.

Teachers at these schools have been told they face dismissal if they breach a newly introduced “morality clause”. Breaches include getting married to someone of the same sex and “escorting a woman into an abortion clinic or handing out contraception to their students”, according to Archbishop Salvatore Cordileone.

The archbishop’s new handbook, which describes homosexuality and artificial reproductive technology as “gravely evil” and teachers as “ministers”, is not going down well in a city which is famous for its live-and-let-live attitude: 80 per cent of teachers at his Mass wore black in protest, while students took to the streets to voice their objections.