Author of Fear of Flying talks to Kathy Sheridan about 50 Shades, cosmetic surgery and ageing 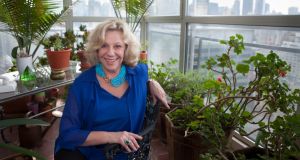 “Given the fact that women’s beauty is too important to our power, it is not surprising that some women, particularly if they’re in the public eye, choose to look younger,” author Erica Jong told Kathy Sheridan on this week’s episode of The Women’s Podcast.

Jong talked about her own plastic surgery, a facelift she had 20 years ago that she “never lies about”.

“If we could go on television with all our wrinkles showing and talk, then that would be one thing. But if you’re a news presenter, if you’re an actor, if in any way you’re in the public eye, you don’t have that option because they won’t put you on TV. This is not us being antifeminist, this is our society being antifeminist,” she said.

Jong talked about her new book Fear of Dying, a sequel to the 1973 book Fear of Flying that sold 27 million copies worldwide. But she also talked about feminism, the dearth of women in politics and leadership roles and her scathing opinion about another hugely popular book, 50 Shades of Grey.

“Above all it’s a Cinderella story. It’s the most retrograde fantasy.”

Jong said she faces ageing by giving back and that mentoring and feminism are inextricably linked.

“If you’re a feminist, you nurture younger feminists. And you help them to change the world. That is my way of growing older.”

Also on the podcast this week, excerpts from a spoken word night at the Bram Stoker Festival. Curated by Una Mullally and Vickey Curtis, ‘I’ve got the Seanachai, I’ve got the secret’ featured performances from Mullally, The Homework Collective and Landless, four women who sing unaccompanied traditional songs in four-part harmony.

Later in the episode, Sheridan talked to two women who revamped the much-loved ballet Coppelia, a story about the obsession with youthful perfection.

Choreographer Morgann Runacre Temple and writer Stella Feehily joined presenter Kathy Sheridan to discuss their inspiration. The ballet runs from the 18th to the 21st of November at the Gaiety Theatre. For more details see balletireland.ie.

Saturday the 7th of November marks 25 years since Mary Robinson was elected president of Ireland.

Since then we’ve had Mary McAleese as president and now there is talk about whether Michael D will go for another term.

In the meantime, The Women’s Podcast wants to know who you think will be the next female president of Ireland: RTE broadcaster Miriam O’Callaghan, European Ombudsman Emily O’Reilly or your own wild card.

Individual episodes of the podcast are available on Soundcloud, iTunes and Stitcher.