Is reclining your seat on the plane the height of bad manners?

Broadside: Your squashed knees are all about their high-flying sense of entitlement 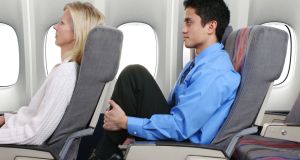 ‘Pressing that little button on your airline seat to give you a couple more inches may seem like your ‘right’ as a paying customer, but what about the needs of the person behind you?’

To recline or not to recline, that is the question – and in my book, the answer is always no.

Pressing that little button on your airline seat to give you a couple more inches may seem like your “right” as a paying customer, but what about the needs of the person behind you who will lose some of the precious space around them, have their table tilted at an awkward angle and most likely, feel pretty annoyed by the thoughtlessness of their fellow passenger?

Reclining seats are a real bugbear of mine. I would never dream of lowering my seat on to the lap of the person behind me so I feel mightily aggrieved when someone does it to me.

Usually I am quite adept at sensing when someone is about to do this and I place my fingers surreptitiously on the back of their seat to prevent them from moving, but sometimes I am not quick enough off the mark and last week was subjected to selfish recliners on both my outward and return journeys.

Silently fuming, I felt powerless as this is a very contentious issue

On the first leg we were behind a family of three where the father reclined as soon as we took off, but the seat behind was empty so it wasn’t an issue. My husband was behind their child who despite loudly berating his parents for all manner of perceived grievances, didn’t recline his seat.

However, distracted by the shouting child I didn’t notice when the mother reclined into my already cramped space. Silently fuming, I felt powerless as this is a very contentious issue – I knew that if I voiced my displeasure, she would state that she is perfectly within her rights to recline.

This is of course true, but then again are we allowed spread ourselves out with arms and legs akimbo in the cinema, on a train or the bus to maximise the space and make ourselves more comfortable?

Could I not, if I wished, sit in a café with my chair pushed back to give myself more leg room, regardless of whether or not I am invading the space of the person behind me? Or what about when I’m sunbathing, could I not place my lounger right next to a complete stranger just because I have as much right to the space as they do?

Yes I could do all of these things, but I wouldn’t because it is downright rude.

And the same goes for seat reclining. It’s bad enough when the passenger wants more space to sleep, but in the case of the mother last week, she actually sat sideways on her knees for most of the flight – so there was no point whatsoever in robbing my space.

On the return journey, I was cursed once again with a selfish passenger who reclined almost as soon as the “fasten seatbelt” sign was switched off and spent the entire flight sitting upright while talking to her companion – another totally pointless display of space stealing.

So while I spent the flight trying to make the most of my limited space, the people in front relaxed without a care in the world. It didn’t even cross their minds to ask if I minded before they pressed the recline button – which in my book labels them as rude, arrogant and concerned only with their own needs and comfort.

Seat recliners are comfort seekers at the expense of others

Psychologist Dr David Carey agrees and says seat recliners may have been overly indulged in childhood.

“Seat recliners are comfort seekers at the expense of others,” he says. “They are likely to put their own needs ahead of others and be inconsiderate and intolerant of anyone who disagrees with them.

“Some have been pampered children who grew up with an exaggerated sense of entitlement. But whatever the reason or motivation they are a most irritating group of people to contend with and infinite patience is often required.”

This isn’t a new problem, but with personal space becoming smaller as airlines maximise capacity, the issue rears its ugly head time and time again. In 2003, an innovative frequent flyer called Ira Goldman invented a device called the Knee Defender which clips on to the arm of the table top and prevents the person in front from moving their seat back.

But while the ingenious contraption is not illegal, many airlines have banned it in order to prevent heated arguments mid-air. So it seems that until something is done to ensure that seats cannot move backwards, polite passengers will be at the mercy of others.

Recliners always argue that they are entitled to lower their seat as they paid for it and if the person behind doesn’t like it, they too can recline. But what about the poor guy in the back seat of the plane – where is he supposed to recline to?

The world can be a cruel place, so I would urge recliners to have some manners. In the same way you (hopefully) hold doors open for others or give your seat to someone in need, respecting personal space is also polite.

It’s nice to be nice, so take the first step and keep your seat in the upright position – it isn’t much of a sacrifice but will make a big difference to the person behind you.

Fast Donnybrook flip with all the work done for €625k
8