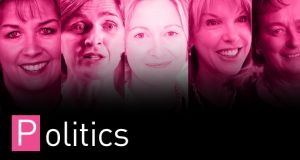 Samantha Power
US Ambassador to the United Nations

Samantha Power, the US ambassador to the United Nations, was born in London to Irish parents and soon after moved to Dublin where she spent the first nine years of her life in Ballsbridge. After her parents separated, Power moved to Pittsburgh, and later Atlanta, with her mother and brother. She studied at Yale University before travelling to Bosnia in 1993 to report on the conflict in the Balkans. She went on to study at Harvard Law School where she began writing about genocide. Her Pulitzer-prize winning book A Problem from Hell was published in 2002.

A few years after the book was published, Power joined the office of a young, relatively unknown senator – Barack Obama. She campaigned with the future president in 2008 and entered the Obama administration as special assistant to the president in charge of human rights and multilateral affairs on the National Security Council. In August 2013 she was appointed US ambassador to the United Nations.

“We are trying to make diplomats and policy makers from all countries – regardless of their domestic laws – to see that empowering women domestically and internationally isn’t just right, but is smart,” says Power, adding that the latest research shows increasing women’s participation in peace processes increases the probability of peace agreement lasting at least two years by 20 per cent. It also increases the probability of a peace agreement lasting 15 years by 35 per cent. “Beyond whether it is or is not important for women to advocate for other women, empowering women in simply sound policy.”

What’s a good pathway into your sector? “I tell young people I talk to that I think the best way to make any decision is by smell and by gut rather than by trying to map out and work backwards from a title. So don’t try to do it backwards – don’t get fixated on a title or a position and spend your time mapping out how to get there. The best way to achieve success not just in my world, but in any sector – both personally and professionally – is by doing what you love for reasons that are true to who you are.”

What’s a valuable piece of advice you received along the way? “The late American diplomat and also a former UN Ambassador, Richard Holbrooke, taught me the importance of prioritization – even when one is trying to manage the ‘tyranny of the inbox,’one can never take one’s eye off longer-term ambitions.

“That’s something that has always stuck with me – especially in a world with no shortage of crises. We need to address the issues that need urgent attention while also simultaneously working to make longer term investments that, if done, may reduce the likelihood of conflict in the first place.”

Born and raised near Dún Laoghaire in south Dublin, Hyland went to Newpark Comprehensive School in Blackrock and later took a degree in politics and development studies at the University of Sussex.

When Hyland joined the department she remembers colleagues saying there couldn’t be a female diplomat in US consulates because Irish-America would not accept a woman nor could a female ambassador be appointed to the Vatican. Today, she says, those attitudes have pretty much disappeared.

There are still not enough women at the most senior levels in the DFA, according to Hyland, but there is a “strong pipeline of talented, experienced women”, which should lead to a significant shift in gender balance at the top of the organisation in the coming years.

“No, although it is definitely the case that senior women in the public eye tend to be judged more harshly and to more exacting standards than men in similar positions. Hopefully that will change as the gender balance evens out at senior levels in business and government and there are more women in powerful positions

Is there a valuable piece of advice she received along the way?

“Ultimately, the value you bring to any work environment is your own authenticity and distinctiveness. As a woman in a very competitive environment, it’s easy to get caught up in worrying about whether you are seen as ‘too nice’ to get to the top, or alternatively as ‘too aggressive’ or ‘too bossy’. At a certain stage, you need to block out the external narrative and focus on your strengths, irrespective of whether they are the ‘right’ or the ‘wrong’ ones for your gender. If you are competitive, driven and ambitious, good. If you are collaborative, good at resolving conflict and empathetic, also good. You might well be all of these things.

Patricia O’Brien
Permanent representative to the United Nations in Geneva

O’Brien is the Irish ambassador to the UN and other international organisations in Geneva. From August 2008 to September 2013, she was legal counsel of the UN and under-secretary-general for legal affairs – the first woman ever to hold that position.

As UN Legal Counsel, she advised the secretary general and acted on his behalf in all legal matters. According to O’Brien the UN seemed to reel from one global crisis to another during her five-year term – she joined the office in August 2008 during the Russian war with Georgia, followed in January 2009 by the bombing of Gaza and a relentless continuation of challenging issues.

In her current role, she leads Ireland’s mission to the UN in Geneva. The UN represents a central pillar of Irish foreign policy and Ireland is involved across all fields of its work, including human rights, humanitarian action and refugee assistance, development, disarmament, health, labour, intellectual property, and science and technology. Recent key priorities include Ireland’s membership of the Human Rights Council, a central role in disarmament affairs and efforts on migration issues and trade negotiations.

O’Brien is a law graduate of Trinity College, Dublin, the Kings Inns and the University of Ottawa, Canada, and a member of the Irish and English Bar.

Born in Brunei, she spent her childhood in Nigeria, Cambodia and the Congo, and was a boarder at Our Lady’s school in Rathnew, Co Wicklow. Her father was a barrister who had worked for the Red Cross and subsequently joined Shell as a legal adviser and then became a managing director of Shell International. She describes her mother, Pamela, as an influential role model and an “extraordinary woman”, who packed her bags in the ’50s to start her family life in Borneo. Her own three children (Antonia, William and Louise) are her proudest achievement and, with her partner, are the centre of her universe.

What would she say to someone at the start of their career in this area? “My philosophy is ‘to apply the seat of the pants to the seat of the chair’. Work hard and focus on the immediate issues, while simultaneously keeping a telescope at hand – concentrate on what you’re doing, do it well but always be conscious of the longer-term implications.

Does female solidarity exist? “Yes, it does exist, but it is delicate and needs to be nurtured. Women have an added obligation to support each other and this involves heightened awareness of the shared challenges and a preparedness to take action, as appropriate.”

Jones has been the consul general of Ireland in New York since 2014. Originally from Co Wexford, Jones studied French and history at UCD and has postgraduate degrees in education and computer science. She has worked at the Department of Foreign Affairs since 1983, covering areas such as Anglo Irish and European Union issues and humanitarian aid policy. She has travelled extensively in Africa with her work and has been posted overseas in San Francisco, Luxembourg and London. While in the UK, her work covered political relations and the Northern Ireland peace process.

She says her proudest title is “mother-of-three” but admits her job is particularly demanding for women with partners and children. She is grateful the DFA recognises the sacrifices partners of employees in the diplomatic service make. “The silent service of the partners of women and men diplomats are fundamental to our success as a country overseas.”

What advice would she give to a young woman at the start of her career in this sector? “Take Articles 2 and 3 of the Constitution of Ireland to heart and seek out every opportunity to build prosperity and reconciliation on the island of Ireland.”

Does female solidarity exist, and if so, how has it helped her? “Over the years, a couple of women colleagues – who were friends – helped me overcome obstacles and my sisters and family have been rocks, sharing their experience of careers and supporting my children and my husband and I. Leadership in the public square by women – for me personally the leadership of Presidents Robinson and McAleese – was magical and encouraging.

Byrne Nason became Ireland’s ambassador to France and Monaco in 2014, after 32 years in the Irish diplomatic service.

Much of her career has focused on Europe. She headed Ireland’s National Forum on Europe, was deputy permanent representative of Ireland to the EU, with the rank of ambassador, and was responsible for EU affairs in Taoiseach Enda Kenny’s office before coming to Paris.

“Having been in Merrion Street gave me a good sense of what actually matters at the top levels of government,” Byrne Nason says. “The Franco-German axis was critical to everything we did.”

Despite the EU’s present difficulties, she says: “I am absolutely a convinced European and I am fundamentally optimistic.”

Byrne Nason studied English and Irish-language literature at NUI Maynooth and was destined for a life in third-level education, until a career adviser suggested the foreign service. “Once I got a sense of what it was about, I became besotted by the idea,” she says.

Byrne Nason met her husband, the retired ambassador Brian Nason, at the Department of Foreign Affairs. They commuted between different posts for the first decade of their marriage, but determined to live together when their son Alex was born in 2000.

Does a woman have to be more talented/work harder/be more ambitious than a man to succeed at the same job? “I think we believe we have to be better. I don’t know any women who’ve made it to the top who aren’t excellent ... On the other hand, there is always space for men who are good, but maybe average or not as good as the best women. We feel we have to work harder to prove ourselves.”

To what extent is it becoming easier for women to succeed in her field? “When I joined the department, there weren’t even a handful of women ambassadors. Seeing more women role models definitely makes it easier . . . Diplomacy is changing. The kind of diplomacy we’re involved in now plays to female strengths – the ability to hammer out a solution, to be patient and cooperative. ”