Irish Women of the World: Entrepreneurs who are making their mark on the international stage

From scientific inventions to high-level hiring and more than a brush with Hollywood, these women are making business work for them 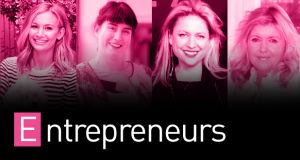 Inventor Jane Ní Dhulchaointigh has a warmth and an ability to parlay tech into plain English so that the rest of us can understand what she means.

That could be in part because the Kilkenny native has an artistic rather than a scientific background. She studied sculpture at NCAD before heading to London to study product design at masters level at the Royal College of Art.

But loathing the dark side of the design industry with its buy-more culture and emphasis on built-in obsolescence, she spent most of her time there noodling about in the college workshop trying out different material combinations to see what would happen.

When she rolled a mix of bathroom sealant and wood dust powder into a ball, it bounced. It was to be her eureka moment.

This early prototype became Sugru, a malleable and mouldable glue, a silicon-based medium that can be shaped like Play-Doh and if left for 24 hours hardens into flexible rubber. The name is taken from the Irish ag sugru, which means to play.

The science part only kicked in when an innovation unit at the college put her in touch with technologist Roger Ashby, now her business partner, and it was he who put her in contact with silicone scientists, enabling her to refine her idea. Its composition is now as closely guarded a secret as the Coca Cola formula.

It was tech writers who gave her her first big break. Gadget inspectors Harry Wallop and Claudine Beaumont at the Telegraph videoed an interview with Ní Dhulchaointigh in December 2009 during which she showed them its various uses – Sugru stuck to the broken foot of a keyboard evened it up enabling someone to continue using it and a electrical plug was given “handles” to make it easier to pull out of the wall.

Sugru is used to fix things – everything from shoes to wobbly tables.

Many use it to “hack” or customise everyday items; a busy chef modified his knife handles to make them fit his hand exactly; a North Pole adventurer similarly personalised his ski poles while the youngest member of the British Olympic fencing team, James Davis, used a foil fixed with Sugru moulded to his grip, in the 2012 Olympic Games.

In 2010, Time magazine listed Sugru as number 22 out of its 50 Best Inventions that year. To put this in context, Apple’s iPad was listed at 34. Last year, Ní Dhulchaointigh was named by CNN as one of the top tech superheroes to watch in 2015.

Unlike the hype that surrounds many other tech launches, Sugru is a product that lives up to its hype so much so that last July when the company set out to raise £1 million in a crowdfunding campaign on Crowdcube, it was overfunded by 355 per cent, raising £3,548,820 (14.5million) from 2,700 investors.

As Ní Dhulchaointigh heads off on maternity leave to have her first child, one can only wonder what other great ideas she will give birth to. Her best piece of advice is a nugget she gave to Lifehacker. com, one of the first communities to get really excited about her product.

“When I was at art college I had a tutor that used to do my head in all the time because he would just always ask me, “why?” And what I learned from him was, just ask why quite often; that’s been a really useful skill, not taking things on face value and looking behind things. So often there’s the story behind the story. It helps to understand different people’s motivations.”

After setting up her first recruitment business in Dublin which specialised in placing nannies, Rosaleen Blair eventually sold her business, Alexander Mann Solutions, to € 10 billion private equity firm New Mountain Capital for a cool € 315 million in 2013.

Recognised as an industry leader and entrepreneur, Blair has won numerous awards including the UK Veuve Clicquot Businesswoman of the Year, E&Y London Entrepreneur of the Year and Strategic Leader of the Year National Outsourcing Awards.

In addition to her professional activities, she enthusiastically supports charities and voluntary organisations including Everywoman, Barclays LifeSkills, the Prince’s Trust and Unicef.

She also invests her time, resources and knowledge in entrepreneurs and small businesses through coaching, sponsorship and mentoring.

“Female solidarity does exist, where it is most impactful is when we move beyond simply discussing how we should support women, and take action. I feel very fortunate to be in a position to champion women in business and entrepreneurs across a variety of industries to succeed in their own right.

“Supporting these women to exceed their original goals is where I often receive my greatest professional and personal fulfilment.

“At Alexander Mann Solutions, our colleague population is 70 per cent female, and I’m proud to say half of our board is also female.”

“Be brave. Don’t be afraid to ask the difficult questions. Ask for help. Seek out sponsors.”

Dublin-born, New York-based, Nicola Parish is a special events organiser for the movie industry with clients including Sony and Paramount Pictures.

She has Robert Downey Jnr, Arnold Schwarzenegger, Bradley Cooper and Sarah Jessica Parker all on speed dial and recently worked on Star Wars The Force Awakens.

From Clondalkin, Parish moved to New York in her teens,working first as a nanny for a family in then unfashionable Brooklyn. She tried several other jobs including restaurant management and working for jewellery designer whose beaded designs were being sported by Ricky Martin and Madonna.

She found her niche in film and learned the ropes working for a big company specialising in movie public relations.

Eight weeks after having her first baby, Parish got her first break. Having emailed former clients to say she had gone out on her own, she landed the premiere of movie Elf, which starred Will Ferrell.

Many of her clients are women and finds they bond really well over the subject of their children. The mother of two keeps a data base in her office noting new arrivals as well as birthdays and any other milestone moments.

Working for herself, her husband, who works in celebrity security, does the lion’s share of the child minding but she recently had to schedule 15 different freelance minders to cover her while he worked at this season’s New York Fashion Week. To what extent is it becoming easier for women to succeed in her field?

“Technology has really enabled me to do my job, no matter where I am. As long as I have my phone and my computer I don’t have to be in the office to work. Hours after having my second child I was able to email a client regarding an event.

“What I do is part talent relations and for that I refer to another database that I have set up with notes on every celebrity I’ve ever worked with; when someone has a baby, its name and sex, who someone is dating, if they get married, if they get divorced – every event I do has a customised list and this information is important.”

“You need to learn who the players in your industry are and you also need to do a good internship where you will get to take in everything. Put your head down and focus. This is the way in.”

From small (and some might say, unlikely) acorns, great things happen. . . after uploading videos of her life with husband Jonathan Saccone-Joly online, the couple have gone on to become one of the world’s great vlogging success stories.

The Cork natives, now based in London, have uploaded a video diary of their lives every day for the past five years, and audiences worldwide have tuned in to witness their relationship blossom (via a proposal, wedding, birth of six Maltese puppies and two children, Emilia and Eduardo). In addition to 626,700 Facebook friends, 1.1 million followers on Instagram and 389,000 followers on Twitter, Anna has more than 828,000 YouTube subscribers across the UK, US, Canada and Germany.

“In the industry where I work, women are my biggest cheerleaders. I get it in the form of comments, videos, emails, messages and tweets, which has opened up my eyes to how much women actually do want each other to succeed. The whole nature of my job is to promote and share what we love, and helping other women succeed goes hand-in-hand with that. I have been helped and uplifted along my way by other successful female vloggers and in the same way, I pay it forward to those that are just starting out in the same field as me.”

“Creating content that you are passionate about it a great way to start. The important thing is your personality and likability.

Having a lot of fancy equipment and cameras will only get you so far. You need to be yourself and by creating videos or writing a blog that people can relate to you can reach far more people and is more likely to be successful.”

“To never lose sight of who you are and to just be yourself. Trying to be something you’re not never works and nobody likes a faker. You don’t have to be the most entertaining, beautiful, attractive, perfect, intelligent woman in the world because nobody really wants to see that! It’s boring and most likely a false representation of who you are. People want to see your imperfections, want to know you are human too. Everybody relates to that and that is what keeps you real.”