‘In the transport hierarchy the bus is below the bicycle’ 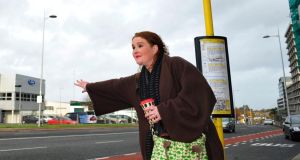 June Shannon: ‘The biggest improvement on the buses is the real-time information at bus stops, which is pretty accurate.’ Photograph: Aidan Crawley

The bus is at the bottom of the transport hierarchy. It is now languishing well below the bicycle. It was in this lowly position even before the nationwide fare hikes – announced last month – and the threat of strike action by drivers at Dublin Bus against €11 million in proposed cuts at the company. The rest, a good service, helpful staff and the sheer ramshackle pleasure of bus travel, is silence.

The efficiencies of Ireland’s bus services are a well-kept secret, and its customers – both satisfied and unsatisfied – rarely break cover.

June Shannon commutes between Dún Laoghaire and Sandyford Industrial Estate, to her job as a journalist on the Irish Medical News, on the 75 bus. This is one of the newer routes across the modern sections of Dublin, as opposed to following old tram lines created more than 100 ago.

Every day at 8.20am Shannon’s husband drops her to the bus stop with the travel mug of coffee she brings from home and she gets on the 75. “It actually goes as far as Tallaght,” she says. Her journey takes about 30 minutes, much faster than a car could make the journey, because there are bus lanes the whole way.

“It’s great. The biggest improvement on the buses is the real-time information at bus stops, which is pretty accurate. They have a Twitter account, @dublinbusnews, and they’re pretty good at getting back to you. They’re very active on Twitter.”

She is pretty active on Twitter herself, tweeting, with wit, what she sees and hears on the bus. Sample Shannon tweets: “I love the smell of wet commuters in the morning.” And, last Monday, “the 75 has been on time for the last consecutive five days. It’s great but it’s also unsettling.”

In general, however, the bus systems, both rural and urban, carry on their daily business unrecorded. They are generally regarded as unreliable and inefficient, and only fit for those who are too poor or too infirm to drive.

The bus – cheap and commodious – is the backbone of any successful city transport system. But in Ireland buses are roundly ignored by politicians and planners: the positioning of bus stops alone, particularly on rural routes, tells you as much. Indeed a politician on public transport is a rare sight, unless accompanied by a phalanx of photographers. Buses are surrounded by snobbery by those who agree with Margaret Thatcher (supposedly) and the late lamented band Fatima Mansions that “only losers take the bus”.

Yet there is a sort of resistance movement of people who, despite everything, still volunteer to use it.

‘Buses are cheap’
“I am a great lover of buses,” says the economist and author David McWilliams. “The bus service in Ireland is brilliant. Most buses have wifi now, so you can work on them. The Intercity service is excellent – always on time. And buses are cheap: it cost me €30 to get to Derry, return. It’s like Carlsberg: the bus service goes to parts of the country that other transport doesn’t reach.”

Like McWilliams, the novelist Peter Murphy is able to drive but hates it. With his three children he lived in Ballymotey, six miles outside his hometown of Enniscorthy – “no buses at all” – and now lives in Wexford town. “Buses are absolutely integral to these areas,” he says. “There is a great Bus Éireann service from Dublin airport to Wexford.”

McWilliams and Murphy can make their own schedules, but the RTÉ newsreader Bryan Dobson is on a tight timetable. He’s also on a variety of transport, including Dublin Bus.

Making the Leap to cash-free
The electronic Leap cards, which can be used on all types of public transport in urban areas, have been protected from the worst of the fare hikes, making travel on a Leap 20 per cent cheaper, as the National Transport Authority wants to encourage more passengers to travel cash-free. “Leap is the way to go,” says Dobson.

That, and the Dublin Bus app and texting service, which mean that you never again have to stand at a bus stop wondering if there is still a service operating.

Buses are, even in these days of mobile phones and earphones, still social places. “People say hello and ask about something on the news,” says Dobson. “Or the driver says, ‘Hello, Bryan, how are you? Say something nice about the buses’.”

All these bus users note the huge improvement in the Dublin Bus and Bus Éireann bus fleets. And they agree there is a snobbery about bus use. “I think there is a bit,” says Dobson. “I find people are surprised I’d use a bus. And even from people who live on good bus routes, they sometimes give lame excuses [for not using the bus].”

“Sometimes I get the bus in my suit, in full armour, and people do a double-take,” says McWilliams. And it is true that on public transport here, unlike in other European countries, you rarely see a man in a sharp suit.

“We all have learned to live in cubes,” says Murphy. “We want to sit in our air-conditioned cars listening to our own CDs.” He calls himself an anti-social bus traveller because he likes to work while on board, but he has no problem travelling with his fellow citizens. “I’m a mucker that way.”

Even loyal bus fans have tips for the inexperienced traveller approaching Bus Éireann for the first time. “Never, ever base your travel arrangements on their website,” says McWilliams. A couple of weeks ago he was travelling to Derry, and turned up at Busáras in Dublin for the bus, which the website had listed as leaving at 6.30pm, only to find that it had left at 6pm. When he complained about this, an official advised him to “never mind your f***ing website, son”.

Peter Murphy thinks the high-water mark for the regional bus service has been reached. “It went from the medieval to the modern between 2008 and 2011 and now it’s in decline,” he says. Murphy also points out that, on some routes, “prices are steep. For a 25-minute journey between Wexford and Enniscorthy it’s a about €8. They get you on the one-ways.” He finds it ridiculous that “you can’t buy a ticket which allows you to get off and get on along the route. You can’t on trains either”.

Even with the fare increases – “another rise we could all do without,” as Shannon puts it (she spends €25 per week on her Travel 90 ticket) – buses are still much cheaper than the more respectable trains.

Murphy says that “when I did my tax last month, I swear to God, my biggest expenditure was on train travel.” For this reason he has decided to start driving again next year.

Steal a pig in Tipperary in 1841? You could be shipped off to Australia
7

Ask the Expert: My partner’s smoking again and I hate it
9