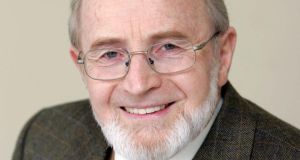 Ian Elliott: a world authority on solar physics, he was a trailblazer in promoting science among the public in Ireland

It came as a great shock to me, and I know to many of his other friends and collaborators, to read of the passing on May 10th of Ian Elliott in The Irish Times death notices. It is perhaps characteristic of a modest man that he chose not to tell people of his cancer and anticipated death. He was entitled to use the title professor, earned by recognition of his work in the Dublin Institute for Advanced Studies at Dunsink Observatory from 1959 until his retirement in 2001, but he didn’t use it.

He came to Dunsink to work under Prof Mervyn Ellison, a world authority on solar physics, and for his PhD he undertook pioneering measurements of the sun’s atmosphere, revealing oscillations that repeated every few minutes. This field of study expanded rapidly when satellite data became available 30 years later.

He spent time observing the sun at Sacramento Peak Observatory, New Mexico, and Roque de los Muchachos Observatory in the Canary Islands, where he was the Irish representative.

He also took on leadership roles in the Irish Astronomical Science Group and the Royal Irish Academy’s National Committee for Astronomy, served as associate editor of the Irish Astronomical Journal and represented Ireland at general assemblies of the International Astronomical Union in Patras and New Delhi. He lectured on astrophysics to generations of students at Trinity College Dublin. More recently, he became concerned with the influence of solar activity on the Earth’s climate – an aspect of climate variability that is frequently overlooked.

Ian was a trailblazer in promoting science among the public in Ireland, long before this became national policy. His imaginative approach involved working with sculptors, painters, filmmakers and musicians.

He was co-founder and chair of the Irish Science Centre Awareness Network and served on the National Committee for Science & Engineering Commemorative Plaques. A master of straightforward language, he was also a regular lecturer and organiser at meetings of astronomical and scientific associations, both professional and popular.

Ian and I had several interests in common. He was a member of the Royal Dublin Society and served on its science committee and council over a 25-year span. In 2012 he received a special award for his long period of voluntary service.

We shared also a particular interest in Irish science history. He was the leading authority on the history of Irish astronomy, publishing many articles and biographies, including in the Dictionary of Irish Biography, and the Oxford Dictionary of National Biography. He felt that Irish people should be as proud of this history as of our literary and artistic heritage. It is a very distinguished history indeed, including such people as Edward Joshua Cooper, Thomas and Howard Grubb, the Third Earl of Rosse, William Rowan Hamilton, Agnes Mary Clerk, William Edward Wilson and Margaret (Lindsay) Huggins. He was always generous with his time, on hand to give advice, to correct mistakes and, in my case, to proofread books.

Very many books have an acknowledgement of Ian’s input and he was also a reliable source for journalists, regularly acknowledged for example in the late Brendan McWilliams’s “Weather Eye” column in The Irish Times.

Ian was a committed member of Kilternan Church of Ireland parish, Co Dublin, serving on select vestry and synods and, for example, giving a talk to parishioners on “The Sun and Climate Change” in 2011.

Born in Bangor, Co Down, in 1936, Ian was educated at Bangor Grammar School and Mountjoy School in Dublin. He graduated in Natural Science at Trinity College Dublin in 1959, followed by an MSc and PhD.

He married Dorothy Ardill in 1966, and is survived by her and their sons, Gordon, Simon and Andrew.

His wide circle of family and friends are thankful for his long and fulfilling life.