Last month, as I left a club to walk home, I was attacked by a man I had never seen before. I am meant to be afraid. But I will not be limited by the daily threat of assault 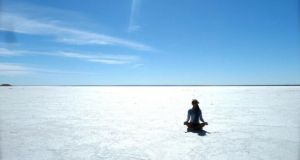 Rosanna Cooney: Did I want to talk about the man who dragged me to the ground, kicked my face in, broke my nose, sliced my lips, fractured my skull, blackened both my eyes and stamped his footprint on to my cheek?

Since I was 12 I have been sexually harassed in public spaces. Men – grown adult men – shouting, heckling, calling to me on the street.

Minor incidents interposed with the more threatening: the white van that tailed me as I passed through Ranelagh; the blacked-out car, heavy with men, that drove beside me in the bus lane as I walked on the N11 at twilight; a 10-minute midnight sprint as I was chased by a suit from a suburban train station in Melbourne.

These are incidents where I felt the prolonged threat of the terrorised. More manageable are the episodes of fast, obvious sexual abuse: the Greek fisherman who followed me to a restaurant toilet and put his hands down my shorts as I washed my hands; the Spanish gardener who grabbed my breasts when I asked for directions. These are despicable but not debilitating.

I am 22, and I have known 10 years of female subjugation enforced by terror.

The fertilisation of fear is inescapable, and that fear is daily fed. I have grown up with the fear of the stranger in the dark. A demonic man with a knife who wants to hurt me.

This fear is conditioned; it arises from newspaper articles, from television shows on which women are invariably the victims of male violence and perverse desire.

This fear challenges me daily, but it does not inhibit. I rationalise that most cases of rape and sexual assault occur between acquaintances.

So I walk alone in the dark; I travel solo and determinedly, without inhibition. The world is vast and beautiful, and it is sad and absurd for 51 per cent of the population to live by the limitations that the daily threat of assault imposes.

Thirty minutes after I had left it I was back in the club, where my friends still danced. My dress was shredded and glistening red, my legs and arms soaking with the blood that should still have been under my skin.

I waited until I was noticed, and for the last time I offered myself entirely unto the kindness of others, passing out from the pain and a concussion that brought darkness.

I heard later that the ambulance took me to a maternity hospital. The sight of me was enough for one nurse to faint and another to weep.

After investigation it became clear that I had not been raped, that I had fought my attacker and escaped. Leaving the nurses to their recovery, my journey into trauma began.

Rolling in and out of consciousness, I was X-rayed, scanned and tested. Dimly aware in the glare of hospital lights and questions, I remember crying quietly as tall shadows stood around me. In the hours and days that followed I lost control of my body; it seemed to belong not to me but to the silent doctors and the nurses who occasionally came to grip my arm and look with pity on my face.

As the restriction of my autonomy continued, and the forced dependence on medication appeared ceaseless, I began to feel the first inklings of anger towards the individual who had put me in a hospital bed.

My friends fielded the requests. Would I go on television? No. Would I be interviewed? No. Could they show photographs of my face? No. It could help to identify my attacker: did I not think it important to share the story? Pause. To raise awareness? To warn other women? To help other women? To protect them ? Pause. Pause. Pause.

I considered my responsibility. Was I selfish to keep silent? Was I avoiding attention and questions because every time I spoke about the attempted rape I lived the reality of a nightmare? No. This is not why I refused to engage with the media surrounding me.

Did I want to talk about the man who dragged me to the ground, kicked my face in, broke my nose, sliced my lips, fractured my skull, blackened both my eyes and stamped his footprint on to my cheek?

Did I think it was my responsibility to become a spokesperson for the propagation of an exclusive brand of female fear? No, I did not, and, no, I do not.

I will not tell girls not to walk alone. I will not tell them to be careful, to live defensively and travel only in herds. This is no answer, only kindling to a fire of fear, lit in the first stages of adolescence and fuelled by the diesel of vulture-like news reports of violence against females. The power of masculinity relies on control and discipline of the body in public and private spaces.

The day after the attack, while I lay waiting for an operation in darkness, unable to open my eyes from the swelling, my friends seethed. Furious for me and ferocious for themselves.

They followed the trail of my blood on cobblestones to seek out CCTV footage. They knocked on every apartment door on the block, seeking out one clue, one single note of recognition from a sleeping ear awoken by my screams. Nothing. No one heard my world alter, no camera recorded the stripping of my rights by the ripping of my clothes.

The reactions of friends varied greatly, according to their gender. “You were just in the wrong place at the wrong time” (male). “But you’re so sweet and lovely. This shouldn’t have happened to you” (male). “God, you’ve had a hard time, you poor thing” (male).

Men focus on me and subconsciously on my potential culpability. There is no reflection on the source; there is, however, an acceptance of the situation.

No man comprehends what a woman instinctively understands: that this attack was a violation of my right to be in any place at any time and not to be tortured by another; that, regardless of my amicable nature, neither I nor anyone deserves this.

My girl friends are angry, when I haven’t the energy to be. But I hear how their habits have changed and how fear is the root. Men tell you to be strong, but women can make me stronger, by fighting the tentacles of fear that leave traces of slime on their bodies.

Their disappointment was tangible, as I described a man without tattoos, scars or any identifiable features at all. The likelihood that a man who does not want to be identified would take measures to make himself indistinguishable was never acknowledged. Clearly, I had failed as a victim.

Two weeks after having surgery on my nose I came back to Dublin. “You must be so relieved to be home and safe” is a sentiment I hear every day. This rankles. What relief? I fought to stay in Spain, and I refuse to be afraid of anywhere on this earth because of one individual.

People here talk about recovering, about taking time to heal and recover. I struggle.

My face is healing. My eyes are yellow rather than purple. My nose is knitting, albeit crookedly. Yet I don’t like being touched. Crowds are difficult, and all the while I battle a feeling that I am being too dramatic.

What happened is abnormal, yet it is common. Rare is the woman who does not glimpse fear while walking alone.

The stranger in the dark is omnipresent. He is a character in every story. Whether the figure materialises or not, his presence is enough to exert control over females.

Strata of trauma exist within each of us, whether as primary experience or secondary. The nurse who fainted when she saw my torn body will share the story with her daughter, her friends, and the action of one twisted man will succeed in limiting the freedom of a spreading many.

The issues of violence and threats against women are not ones for women to address. It is not my responsibility to defend myself, and I don’t shirk it when I refuse to tell women to be wary and afraid.

I will live with the scar on my face, I will calm the anger that I feel, I will continue to hike alone, above the barricades of terror that commit me to “safe” areas. I will feel the nerve and the fear, and I will rise above it daily, because the alternative is barely shy of internment.

Rape Crisis Network Ireland and Dublin Rape Crisis Centre offer a free, confidential, 24-hour listening and support service for women and men who have been raped, sexually assaulted, sexually harassed or sexually abused at any time in their lives, on 1800-778888. The Women’s Aid national freephone helpline (1800-341900), which operates from 10am to 10pm every day except Christmas Day, provides support and information to callers experiencing abuse from intimate partners

Róisín Ingle: I’m menstruating as I write this. And I’m mad as all bloody hell
3