'I was high on life in Dublin for first six months, then I got frustrated'

New to the Parish: Cellist Katie Tertell arrived from the US (via Manchester) in 2015

Katie Tertell from Washington DC has moved to Ireland and now plays in the RTE Symphony Orchestra. Here she talks about her life in Ireland. Video: Barry Cronin 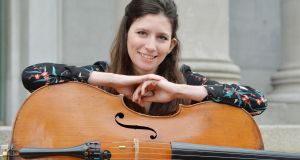 Katie Tertell knew by the age of 14 that she wanted to be a professional musician. She had only been playing the cello for two years but was determined to pursue a career in classical music.

“There’s a lot of pressure in the US to decide what you’re going to do in life early. People will ask you when you start high school and I was already thinking music then, even though it was still a total pipe dream.”

Unlike most classical musicians who begin playing their instruments as early as three or four, Tertell was 12 years old the first time she picked up a cello. A strings teacher came into class one day with a violin, viola and cello so the students at the public school could try out all the instruments. The moment Tertell heard the rich sound of the cello, she was hooked.

“I remember thinking I love the sound of that, I want to play that. My parents rented a cello and when we got home from the shop my mum was like ‘this is way too big, take it back’.”

Tertell began classes with the woman who had visited the school and rapidly developed her skill as a musician. Despite her parents’ complete lack of knowledge of classical music, they encouraged their daughter to practise and attend classes.

“I know a lot of kids dread going into their music classes but I loved it just because my teacher loved music and really inspired me.

Tertell was surrounded by science growing up in Washington DC – her mother worked as a computer programmer for Nasa space launches and her dad worked for Fema (federal emergency management agency) which deals with natural disasters.

“My parents were really wonderful and taught me to have a great intellectual curiosity but knew nothing about classical music.”

While her immediate family were supportive, other family members were sceptical when Tertell decided to study music at Indiana University. “My extended family were like ‘you’ve got brains, what are you doing wasting your life. You should go to a good university’. A lot of people told me you’re never going to make it, you should just quit.”

“Any musician will tell you this, that you have to become used to being told you’re crap by so many people, that you’ll fail and you should just give up, and I definitely had my share of that.”

After four years in Indiana and another year freelancing as a musician, Tertell moved to Cleveland to study a masters in performance and Suzuki pedagogy. Her mind then began to wander towards Europe. She had visited Germany with her school orchestra aged 16 and always dreamed of returning to study and play music on European soil.

“It was the first time I ever went abroad and I just fell in love with the culture. I was fascinated by the history and that people could walk down these streets where there are churches that are a thousand years old. Germany is a country that has a very rich musical heritage so you can feel this aura and excitement that pieces of music were written in these cities.”

She decided to move to Manchester where she taught and played as a freelance musician. “I was planning to come for one year but after about two weeks of being in Manchester I thought, I don’t want to go back to the US. Everything in the United States is so black and white. People there appreciate things that are clear cut and organised. The artistry and music making in Europe is more about the grey, the mix of colours and nuances.”

Tertell also began taking auditions all over Europe in the hopes of securing a job with an orchestra. In March 2015, while playing with a quartet on board a cruise ship in Norway, she received a call from the RTÉ National Symphony Orchestra offering her a job.

She had already spent nearly a year on trial with the orchestra so was familiar with the other musicians when she arrived in Dublin in June 2015. She found an Airbnb in Grand Canal Dock and began to explore her new hometown.

“It was the perfect time to be introduced to Dublin, the weather was glorious and I was out every night with my temporary flatmate, a Lithuanian girl who was also new to Dublin. The great thing about playing in an orchestra was that every Friday night after the gig you’d always go for a drink together.”

“I was high on life for the first six months and couldn’t see there was anything wrong with the city. But as time went on I kind of got frustrated with things like Dublin Bus being really unreliable and it being an expensive city to live in.”

Tertell now lives in Booterstown and teaches cello in her spare time. She enjoys being a musician in a country which she says has “natural appreciation” for music. “It probably comes from trad or storytelling but there’s this natural way of making music here that infiltrates all the culture in Ireland.”

The cellist says she would prefer to shut herself off from the constant stream of news headlines coming from the White House and admits she’s grateful she’s not in the US at the moment.

“This might seem like a bit of an exaggeration but I think the immigration ban is the scariest and most tragic thing I’ve seen in my lifetime. I don’t have many friends that support the Trump presidency but I have a few relatives that do and it’s very painful for me to talk to them about it.”

Tertell says musicians worldwide have a responsibility to figure out a way of making classical music more appealing to all ages before interest in orchestral concerts dies out. “It’s one of those things that every symphony orchestra in the world is thinking about and working on. I think musicians have to change their mentality. There’s still that ‘I worked really hard to get here’ elitist attitude but that’s not really why we’re drawn to music.

“There’s something in music that speaks to the essence of humanity and you need to be able to communicate that to people. If you’re not able to relate that to a person on the street, why should they give a crap about what you do?”

“I truly believe in music’s power to bring people together, of how it teaches tolerance and universal brotherhood in a time which so desperately needs it.”