I’ve an ideal beach body: the kind that gets me to the beach | Tanya Sweeney

The way some malevolent media outlets tell it, being a size 14 is synonymous with being a slovenly slattern, someone neither fully in control of their own life or mind 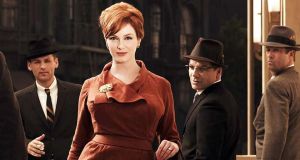 There’s been cultural backlash against thinness, first with a ‘celebration of curves’ amid the advent of Mad Men. Above, Christina Hendricks

In Topshop, no one can hear you scream. Probably just as well, because the last time I was there, a thought napalmed me for a good two minutes: I could die in here, right now, listening to Rihanna, bathed in merciless fluorescent light, and caught arseways in this dress.

Size 14, the label read. Be grand, I thought. Ten minutes in, I’m starting to feel a bit faint from the silent wrestle to get back out of the dress. My body, sensing yellow alert, starts to swell with stress. It’s all a bit like Kate Winslet at the end of Titanic, except I’m without driftwood and a whistle. What I do have is a bum that can stop traffic (not quite in that way; I mean if you crash into it, you can pretty much consider your Lexus bonnet totalled). A final tug, and the dress and I are no longer intrinsically linked. With only the tiniest of rips, m’lud.

Years ago, I could move up a dress size without flinching. But today, what used to be a system denoting inches has become a malevolent, loaded code.

In celebrity culture, where women “flaunt their bikini bodies” and “pour their curves into dresses”, a size-14 woman is cast as someone defiant; lawless even. “I’m 160lb and can catch a dick any time I want,” comedian Amy Schumer declared recently. Good for you, came the rather condescending response.

Yet the way some malevolent media outlets tell it, being a size 14 is synonymous with being a slovenly slattern. It’s the fate of someone neither fully in control of their own life or mind. I’ve lost count of the number of barely famous bints who crow tearfully about “shooting up to nine stone” amid some class of personal breakdown. Only after they’ve returned to size six, and the fitness DVD is safely in the can, will they fully disclose their inner turmoil.

I get it: it’s cold, hard commerce. Women made to feel inadequate and insecure will buy (and buy). At its core, the diet industry is built on encouraging repeat business.

It takes a young woman of steely, heroic determination not to get sucked into it all. Fortunately, and to paraphrase that eminent philosopher Kathy Bates, I’m older and have more insurance against this stuff.

Did I head home high on endorphins? Did I heck. Stuck at size 14, I was oxter-full of simmering resentment. Others got to eat and sloth to their hearts’ content with minimal corporeal blowback. Why couldn’t I?

But then, something sort of wondrous happened. After years of self-disappointment, I began to make peace with my body. The little voice that would whisper “if I were three stone lighter, that guy would like me and my life could finally begin” toddled off. My body is not for being gawped at, it’s for doing things, and it does them perfectly well. Sure, summer meant that it was time, as my friend June called it, for the “underboob brooks to start babbling”, but my body got me from apartment to beach. And that’s the important thing.

There’s been cultural backlash too against thinness, first with the “celebration of curves” (blech) amid the advent of Mad Men. Lately, thick thighs have become the media’s new body image to strive for, after the shelf-like bum had its proverbial moment in the sun. “Fitspo” has supplanted “thinspo” as motivation for those finding it tough to wrench themselves away from the sofa. Still, “fitspo” is every bit as self-righteous, inclined to feed into self-loathing, and as misleading as Size Zero. We’re simply swapping one kind of body fascism for another. Creating a body ideal du jour, however healthy and attainable, still tells us all that we’re not good enough. None of them address the emotional or psychosocial reasons for obesity or eating disorders.

Ultimately, body image is just one aspect of being a woman. The others are far more rewarding and intriguing. I have a “happy” size; whether I stay there is anyone’s guess. In the meantime, the question’s no longer, “are you ready for the beach?”, but rather, “is the beach ready for me?”