'I sold two hats and cleared all my debts' 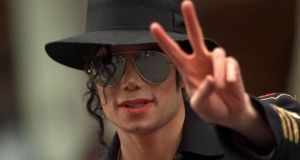 The late Michael Jackson: Laurence Carpenter was unemployed when he sold two of the singer’s hats at an auction in 2010 for $140,000, having bought them on eBay for $2,500.

“In that one night I cleared off all my bank loans, all my debts, and I had some left over to continue the business,” said pop memorabilia dealer Laurence Carpenter of the auction that changed his life.

“It was like winning the lottery,” he told Róisín Ingle, presenter of the Róisín Meets podcast.

Carpenter was unemployed and back living at his parent’s house in Tallaght, Dublin, when he sold two of Michael Jackson’s hats at an auction in 2010 for $140,000, having bought them on eBay for $2,500.

Out of work for some time, with a large bank loan and funds running out, Carpenter had a little black book full of business ideas that he would come up with on a Monday, only to discover by Wednesday that, “somebody else had actually done it or I didn’t have the experience or the skills to execute it”.

He had faith though, and after Michael Jackson’s death in 2009 he hit on something.

Carpenter noticed memorabilia going for “crazy money” at auction and he tracked down an artwork signed by both the artist and Jackson for $500, selling it on for $4,000.

“I thought to myself, ‘I’m after making some good money here. There might be something in this’, so then I went hell for leather,” he said.

Listen to the interview

Six years ago he tried and failed to win a Michael Jackson hat at auction, but undeterred he contacted the seller to offer him $2,500 for it along with a second hat he had spotted in the background of the picture.

Six months later, sitting at home in front of his computer screen with his sister and mother, he watched as those hats sold for a combined $140,000 at auction in Los Angeles.

He has since founded his business, Pop Icons, which specialises in dealing in high-end music memorabilia. He said there is a good market for it because, in an era of digital music, fans still want to hold something of their favourite musicians in their hands.

Carpenter only collects items from artists he is passionate about and currently has in his ownership a head dress worn by Beyoncé, shoes and a hat worn by David Bowie, and an interesting Bob Dylan collection.

Alongside a Fender guitar, an amp and a guitar strap belonging to Dylan, there is a bag of knickers and bras that the folk icon had thrown at him on stage by adoring fans. Carpenter nearly disregarded the underwear when he bought the collection, but thought better of it in the end.

“That’s a quirky bit of the story,” he said with his business hat on. “That might get a bit of press.”

Carpenter admitted he is a big fan of George Michael and among the memorabilia he has in storage are handwritten notes the pop singer used as he read a statement outside court following a legal battle. He also has a number of stage costumes he wore.

Does he worry what his favourite singer might think of his line of work?

“George Michael bought John Lennon’s piano that he recorded Imagine on for $1.2 million,” he said. “So what’s the difference between me buying George Michael’s old stage costume and that?”

‘You guys are amazing’: Matt Damon’s message of support to Temple Street children, families and staff
10