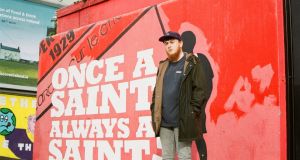 Throwing an iPad in the microwave actually charges it, bro.

What’s the moment that changed your life?

July 2017 was the month my life changed forever. I turned 21, and left my retail job of two years. I told the boss to sh*g off and went headfirst into unemployment. I thought: why not become a rapper?

Outside of my parents and my granny, probably Brian Kerr. He’s the embodiment of who I want to be; suave, intelligent, witty and unapologetically himself. I reckon he’s probably a better rapper than me, as well. Drimnagh has produced a few legends, but the “Greener” stands alone as the don.

What is the most pain you’ve ever experienced?

When I was eight, I broke my collarbone. I remember the pain came in waves, left for a minute then returned to leave me in a heap in the back of my ma’s Fiat Uno.

Who or what has been the biggest influence on your career?

What practical thing you do to help your personal development?

When I was a teenager, I had a tendency to tweet my thoughts incessantly. I recognised, along with the help of my mates, that allowing the world to regularly peek into my brain, warts and all, wasn’t the best for me or my wellbeing. Ever since, I’ve written my thoughts and feelings down on anything I could get my hands on. The themes and forms I’m writing down now are different too. Instead of inane adolescent ramblings, I’m writing inane adult rap tunes. Thematically, there’s a lot of variation now, whereas back then, the pen was only ever sought in times of sorrow.

What location do you return to for a sense of calm and time out?

Richmond Park, Inchicore, home of St Patrick’s Athletic. I wouldn’t say that it instils calmness and serenity, although it is quite a scenic football ground, nestled behind redbrick houses and buffered by the river Camac. Win, lose, or draw, Richer allows myself and others to experience some form of catharsis, although that usually manifests itself by shouting obscenities at strangers.

Football, for me, allows you to forget about everything else going on in the world, micro and macro. As soon as you pass through the turnstiles, the only things that matter are the menial aspects of 22 men running around a field, and whether or not the chipper van will receive your custom.

Procrastination seems to be ingrained in my DNA.

And your worst habit?

I have to constantly check that I’ve locked the front door of my house. If I don’t do it, I spend the whole day panicking. It drives me up the wall. It might be a Drimnagh thing.

What personality trait would you anticipate your friends identifying as your most dominant?

It’s probably the fact that I don’t change my demeanour for anyone. I’ll treat anyone and everyone in the same vein, always respectfully but prone for a bit of slagging. Yep, even my ma and all.

How about an unfulfilled goal you don’t tell anyone about?

When I was a nipper, I had an obsession with rally driving. I was flat out playing Colin McRae Rally 2.0 on the PlayStation to the point where I made a pact with myself that I’d be a rally driver when I grew up. I’d like to take this opportunity to apologise to my seven year-old self: you grew up to be a fraud. I don’t even have my provisional licence.

Is there a gift you tend to purchase repeatedly for different people?

What’s the wisest thing you’ve ever heard or read?

Only dead fish go with the flow.

What are you most proud of in your life?

The fact that I’m happy and relatively healthy is enough for me.

Fynch is a rapper from Dublin and co-founder of the record label Burner Records.

Tell Me About It: My husband is too friendly with a female colleague
10