Hilary Fannin: Sex is hard to come by on planet airbrush 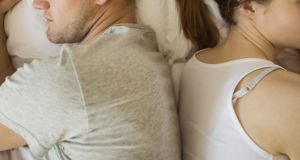 According to a survey, younger people are actually having less sex than we imagine. Photograph: iStock

I read in a survey recently that younger generations, up to and including shiny thirtysomethings, don’t have sex any more. Okay, so there are a couple of things in that statement that might need to be “unpacked”.

Obviously younger people are having sex, of course they’re having sex, otherwise there would be no such thing as bubble-gum-flavoured lubricating play gel and they wouldn’t spend their lunch breaks on beauty beds having their pubic hair covered in molten wax and then expertly ripped out of their mons pubis by someone with perfectly sculpted eyebrows, a pair of latex gloves and an expression of mild disdain on their serum-enriched face. (Hollywood or Brazilian triangle, baby, you ain’t even in the park if you’re not as delicately sculpted as a snowflake or bald as a baby eagle these days.)

According to the survey, younger people are actually having less sex than we imagine. Cohabiting, single or in a purgatory of anticipation, there is, it’s suggested, a whole generation out there too exhausted to hit the pause button on the remote, too world-weary to turn their attention away from binge-watching Netflix to gird their loins for some loin-girding.

I mentioned this to a couple of fiftysomething mates the other day. We were sitting on a wall, in a swelter of unaccustomed sunshine, perspiring unprettily and drinking from previously used plastic water bottles that we’d had the temerity to refill from our own taps.

“I wouldn’t turn off Netflix for a shag either,” said my friend, a woman who, despite her perch on the garden wall, is not known for sitting on the fence.

“Yes, but they weren’t surveying people like us, were they?” I replied. “You’ve been married to the same bloke for 150 years; odds-on he’ll still be around come the season finale.”

“I felt nauseous this morning,” said my other middle-aged mate. “I thought I might be pregnant until I looked at the date on the yogurt carton.”

“I’d look at the date on your birth cert before I got too excited,” our more pragmatic fence-averse friend said bluntly.

“The world’s oldest natural mother was 59 when she gave birth,” came the retort. “No hormone treatments, nothing, just a regular Friday night: chicken curry, a bottle of Liebfraumilch, a couple of spicy poppadoms, put the cat out, double-lock the front door, check the gas is off, check the gas is off again, look for your reading glasses, find them in the cat basket, heat up the Horlicks, check the gas is off – and hey presto!”

“You know these used plastic bottles we’re drinking from?” I asked, in an effort to deflect the conversation.

“Yes,” they replied, ripped from their reveries and struggling to find the connection.

“I read about it the other day. Reused plastic bottles are deadly; more germs than a dog toy, apparently. Spores, water spores, we’re imbibing so many germs and spores we may as well be on our hands and knees drinking from a dog bowl.”

“I tried that once,” said the pragmatist. “Still wouldn’t induce me to turn off Netflix.”

Asymmetrical breasts
The British do an awful lot of social surveying, the entire island awash, it seems, with earnest, clipboard- bearing millennials in waterproof shoes, asking each other why they don’t have sex any more.

One of those surveys claims that vast numbers of younger women feel depressed because of the way they look, and are too self-conscious about their asymmetrical breasts or wobbling thighs to risk getting into the scratcher with someone they quite fancy (someone who’s more than likely lying awake at night worrying about fiscal rectitude and the elasticity of his scrotum).

Welcome to planet airbrush. I assume these findings are the net result of years of peddling paintbrush perfection, of selling our kids a cruelly unattainable ideal of faultlessness. We speculate about this sexting generation, digitally adept at swiping pictures of other people’s accoutrements into the ether with a flick of their skinny wrists. I wonder, though, if they’re also a generation trapped behind the glass, tethered to their hair straighteners, saving up for a rhinoplasty and guiltily living on baby-leaf spinach and steamed salmon darnes all week so they can photograph themselves bingeing the weekend away on burritos and negronis.

I suppose we could tell them that it gets better, that there will come a time that you no longer give a fiddlers about your floppy bits, that you learn to tear up the commandments, evict your inner critic and refuse to answer any more surveys.