Hilary Fannin: Life is far from hunky dory in our greying middle years 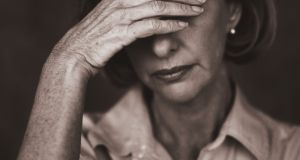 Middle-aged people – which, I think, constitutes people aged about 40-59 (supposing we are all going to live until we’re 118), are bloody miserable, apparently.

We are in a dreadful state: wretched, agonised and disconsolate.

Statistically, we middle-agers (speak for yourself, I hear you mutter) have lower levels of life satisfaction than any other age group.

We who were conceived and reared and grew up in and around the sullen 1960s and soporific 1970s are about as cheery and Zen as a brace of lightly spiced battery-fed chickens in the run-up to barbecue season. Blame Vatican II, glitter boots or disco balls, blame whatever you like, but it seems things are not exactly hunky dory in our greying middle years.

According to the how-lousy-is-your-life survey, we forty- and fiftysomethings have worryingly high levels of anxiety. We are tangled balls of distress, unravelling at the seams, hurtling on our glumly fallen arches from Billy to Jack and back again, trying desperately to satisfy other people’s endless needs while blithely disregarding our own.

I read all about it in the newspaper. Actually, I read all about it while simultaneously trying to persuade the cat that tinned sardines in tomato sauce were just as palatable as her usual fare of broiled goat anus in a tinfoil pack. I had run out of her damn pussycat sachets, and it was raining, dark and bone-snap cold. The trees were swaying in a malevolent dance beyond the windowpane, and I really didn’t want to run through the dark lanes to the local shop and shiver in the queue for the cash desk.

Late evening is a particularly depressing period in the life of my local convenience shop, when tired lines of grim people, usually male, queue up to buy their precooked pork-chop-and-smashed- potato dinners in microwaveable packs. It’s a heart stab I didn’t feel like self-inflicting, thinking about all the lonely people and all the processed peas in this bleary world.

I left the disconcerted cat to contemplate my generous offering and sat down to read the paper.

Statisticians, analysing personal data collected over three years from more than 300,000 adults in the UK, found that happiness and life satisfaction plummeted in middle age.

All the usual guff

The report blamed all the usual old guff for our abject states. We work too hard, we are still skint, we have ageing, dependent parents, and many of us, who were busy pursuing careers and the perfect gin, had our children later in life.

Now, at a time when one might happily consider devoting one’s life to germinating the hydrangeas or learning the gentle art of calligraphy, we are belting along motorways in the straight-down rain, trying to find mud-heavy football pitches or factory-sized discos for our pouting adolescent offspring.

I had my youngest son when I was rolling towards my 40th birthday. When my granny was 40 she was engaging in long wicker-chair naps beside the dahlias, followed by a bracing cup of tea and a slice of chequered Battenberg. She was not trying to figure out the aerodynamics of a car seat and hurling her breast-pump against the wall.

I re-read the report, ate one of the cat’s spare sardines and decided that, although presumably statistically accurate, the whole thing was all a load of baloney.

Life is stressful, sure. Work and money, hope, loss and death, finicky cats and the long, level gaze of your children asking you to interpret a world that sometimes feels like it’s choking on rage is stressful. And man alive, the long, level gaze of a dependant parent asking you what’s going to happen next is stressful. And don’t get me started on illness. Hospital car parks and cannulas, of which I’ve become a kind of connoisseur since my mother became ill six months ago, are damn stressful.

Anyway, the good news is that when you hit your mid-60s, you will be giddy with glee. There’s about a decade, apparently, when you can trip the light fantastic, travel, think, pursue your interests, hang up your nurse’s/chauffeur’s/short-order chef’s hat. By that stage the stricken cat might even be eating Beluga caviar.

Michael Harding: ‘I could hear my boots under the bed, crying all night’
6

Life with mortgage arrears in Ireland: I had ‘seizures from stress’
Real news has value SUBSCRIBE