Here I am, stuck in the squeezed middle with you

Has the economic crash brought out an occasional bitter streak in you that is hard to shake it off? You are not alone 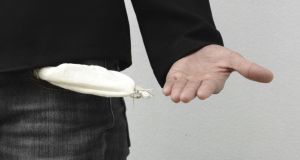 Is your salary spoken for two days after you get paid? Photograph: Thinkstock

There isn’t a membership card or a certificate to show you are part of it. There’s no annual conference or written set of principles, or a manifesto you can refer to. There is no way of proving you are definitively part of Ireland’s squeezed middle, yet you probably know if you are, or feel that you might be.

It was once defined by the Minister for Finance, Michael Noonan, as referring to those who earn between €32,800 and €70,000 per annum. Income is a very crude measure of wealth, disposable income or standard of living. This is particularly the case in a country where a significant chunk of the population is still saddled with a large volume of debt, much of it incurred over the past decade by simply acquiring a home. Wrong age, wrong time.

The squeezed middle is a broad church but if you really are a member you might recognise some of these scenarios:

- Every time you turn on the TV somebody is talking about the recovery, or first-time buyers, or the latest positive set of exchequer figures. Turned a corner, and all of that. For you, however, this is like an out-of-body experience, because a recovery seems so removed from where you are now.

- It feels like you’re always broke, even though you have a good job and a “decent” salary. The last few long days of the month are always a struggle. You cross your fingers and hope the car won’t break down or an unexpected bill won’t thunder through the letterbox.

- Your salary is spoken for two days after you get paid: there’s the fuel for the car or cars, the after-school activities (free education?), electricity, gas, bins, water charges and property tax, train tickets. And that’s all before you even think about putting food on the table. God forbid you have a few drinks at the weekend or buy some new clothes.

- You have signed up to pay your water charges and have paid your property tax, but then again, you always pay your taxes whether they are fair or not, whether you like them or not. Pay as you earn. You can’t believe how much goes out in tax and charges every month (about half of everything) but, you know, people like you keep the wheels of society turning. Some call it apathy when you suffer silently. It is why the squeezed middle is sometimes also referred to as the coping classes.

- You may have joined the water protests. You may not even disagree with the charges as a concept, but this charge is the proverbial straw that broke the camel’s back. Another tax on a tax on another tax. How much more can you take?

- You feel like nobody represents you – there is no lobby group or union or political party that really voices your concerns and understands your issues.

- You have considered supporting Lucinda Creighton’s new party. It’s not that you are a fully signed up Renuant; rather you’re scrambling to find somebody, anybody, who comes close to representing your views. You may vote for an independent in the next election.

- You have cancelled or reduced your private health insurance in the past five years.

- You get nothing for free, except for child benefit. How long can that last?

- You own your own house, or, more correctly, you have a large mortgage on a house that will be yours at some point in the future if you can keep up the repayments. If you’re unlucky by virtue of when you were born, you bought a property in the last 10 years. You weren’t being lavish, rather buying a home for your family.

- If you’re really unlucky you can’t keep up with your mortgage repayments.

- But don’t expect sympathy. It was your own stupid fault for betting on the property market.

- You have put off a trip to the doctor because finding the €60 GP fee can be difficult, particularly at the end of the month. You do not have a medical card.

- In fact, you get nothing for free – school transport, bins, charges. You earn above average wages so you will pay for everything yourself. Fair’s fair, right?

- You don’t like admitting you feel like this because you always had a social conscience. But the economic crash has brought out an occasional bitter streak in you and it’s hard to shake it off.

- Life is generally not that bad and, yes, there are certainly people worse off. Most of your problems are “first-world problems”, but then again you live in the first world, so your problems are problems for you. So keep working, keep paying those taxes, keep coping, your kids will thank you for it, and remember there are others out there. One of these days we might even set up a lobby group or take to the streets.