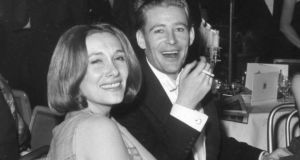 Peter Seamus O’Toole, who has died aged 81, was for a time more associated in the public mind with drinking and “hell-raising” than artistic achievement, but this should not be allowed to eclipse his brilliance as an actor on stage and screen.

His performances, ranging from an acclaimed Lawrence of Arabia, through leading Shakespearean parts to comic roles in adaptations of PG Wodehouse, and his masterful title-role performance in Jeffrey Bernard is Unwell, gave the lie to those who said – as one did – that he “frittered his life away on wine, women and song”.

His days of riotous behaviour were brought to an abrupt end in the mid-1970s, when doctors diagnosed pancreatitis and warned him he would drop dead if he took another drop. He had yards of his intestinal tubing removed and he gave up drinking, almost.

No one is quite sure whether his birthplace was Connemara, Dublin, or Leeds. But his boyhood upbringing was certainly in Leeds. He attended a Catholic school but renounced religion at the age of 15.

His working life started on the Yorkshire Evening News, where he worked for some five years. But the editor finally told him: “You’ll never make a reporter; try something else.”

After national service in the royal navy he became “quite by chance” an actor.

‘Wonderful-looking birds’
“I hitched to London on a lorry, looking for adventure. I was dropped at Euston Station and was trying to find a hostel. I passed the Royal Academy of Dramatic Art, and walked in just to case the joint.”

He ultimately took up a scholarship, “not out of burning ambition but because of all the wonderful-looking birds”.

His West End debut in 1957 was in a disastrous comedy which was booed as the curtain fell on the opening night. The drinking spree that followed landed him in court, where he was fined 10 shillings for being drunk and disorderly.

But he put that disaster behind him and won the Best Actor of the Year award in 1959.

When he was still in his mid-20s he joined the Shakespeare Memorial Company, where he consolidated his position by tackling roles such as Hamlet, Shylock and Petruchio. He was also a lover of George Bernard Shaw and performed many of the big roles in his plays.

But it was his performance in his first big film, in 1961, as Lawrence Of Arabia that launched him as an international name.

He starred in a series of films including The Lion In Winter, Beckett, Lord Jim, The Last Emperor and My Favorite Year which were box office successes, and others, such as What’s New Pussycat?, King Ralph, High Spirits and Caligula which were not all successful.

O’ Toole said he enjoyed acting for “the gallantry and gamble” and he relished the risks involved. His Macbeth in 1980 received what were regarded as the worst set of reviews in living.

Around the mid-1970s and the time of his life-saving surgery, his marriage with actor Sian Phillips, with whom he had two daughters, broke up.

He married the actor Karen Brown in 1983; they had a son, Lorcan, but the marriage did not last long.

The work, meanwhile, was often reckless and indifferent. Not a versatile actor – he was now becoming someone who could play only versions of himself – and in 1989 he was blessed by providence, in the form of Keith Waterhouse’s play Jeffrey Bernard is Unwell. O’Toole took the part of the alcoholic, fatalistic and self-destructive Spectator columnist with laconic restraint. It played every night to standing ovations and may have been the triumph of his career.

In 1982, he did George Bernard Shaw’s Man and Superman in London, and sometimes wavered as he strolled across the stage. On screen, he did almost anything – Svengali (1983), Supergirl (1984), Club Paradise (1986). Much was awful, nothing was dull.

Incendiary material
He remained emotionally attached to Ireland and, at the time of Bloody Sunday, he expressed sympathy with the Provisional IRA. In the 1980s he was booed at the Gaiety Theatre by an audience that found his material, Swift’s A Modest Proposal, with its advice to the Irish poor to eat their children, too close to the bone.

He was a passionate enemy of subsidised theatre where, he claimed, was a waste of taxpayers’ money.

“It is the same rules for us as it is for cricket, boxing, anything. We are an entertainment. We have to live and thrive in a competitive market. If we become an overprotected species we are dead.”

Cricket was another of his passions, but of acting he once said: “The love of it is great, huge, and it will be with me forever. I blundered into it, found I could do it well. It has raised me from nothing into something, not a lot, but something.”

Throughout his career, O’ Toole had been nominated for an Academy Award on eight occasions, the most recent being for Best Actor in the 2006 film Venus, but never won one.

But the dubious honour was tempered in 2003 when he received an Honorary Academy Award for his body of work.

Last year he decided to retire, or “chuck in the sponge” as he put it. “The heart for it has gone out of me,” he said. “It won’t come back.”

Thinking of take-out tonight? Here's the pick of Dublin's restaurant meals to go
7