Growing up down there: me and my pubic hair

Why should young women feel ashamed of their perfectly natural ‘lady gardens’? 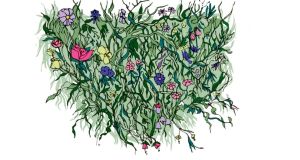 Throughout my day, whenever I’m confronted by images of women, I’m reminded that my body is disgusting. I’m too fat. I’m not tall enough. My breasts don’t look the way they should. The hair on my head is insufficiently abundant and voluminous, and the hair on the remainder of my body is loathsome and should be removed at once.

Remembering all of these things about myself can really eat into the day. It can be distracting to have to feel revolted by myself so frequently – to recall that I’m doing “being a woman” wrong. I’d recommend setting an alarm that sets off an obnoxious klaxon every seven minutes. Are you feeling bad about yourself frequently enough? Or is that yet another thing you’re failing to do properly?

Yet we can all fall prey to benign acceptance of this unhelpful message that women should be something other than they are and that reality is disgusting. If you are a woman and the words you are about to read discomfit you, you have likely fallen into the trap of female self-loathing.

Pubic hair. It grows around the genitals of sexually developed adults, and if you’re female and under 35, you are probably obsessed with yours. You cannot, however, just say “pubic hair”. You might refer to it with dainty euphemisms such as “foof” or “lady garden”, but then the point of a euphemism is to make something horrid sound more palatable.

When I told my mother that I intended to write about women’s pubic hair, she did not react well. Her response was along the lines of: “Why would you want to write about vulgar things that don’t matter?”

Her response, although completely wrong (sorry mum), was pertinent. The idea that a physical feature that is common to almost every adult is “vulgar” is ridiculous. There is a taboo attached to anything related to pubic hair, which dictates that we must never discuss it outside a circle of trustworthy females, but if we really have to, we must do it in hushed tones while looking at the floor and wading through a miasma of metaphorical shame.

A major issue
Pubic hair matters because it is a major issue among young women. We’ve somehow become subject to the unreasonable expectations of others. However it came to be the case, it certainly is the case that very many young men expect women’s pubic hair to be either very carefully groomed or non-existent. Perhaps it is the legacy of pornography. Perhaps it’s just another means by which a misogynistic society imposes itself on women’s sense of what it means to be female. Whatever the reason, it is unadulterated nonsense.

We have been duped. So many young women I know are having their pubic hair torn from their skin because their partner wishes or expects them to do so.

I have had more than one partner request that I remove all my pubic hair, and I confess to having been conflicted. I mean, they would clearly find me more attractive that way. That must mean I am unattractive now. I’ve even encountered a man who told me, with a suggestive leer, that the idea of a woman undergoing the pain of waxing that area “just for him” gave him tremendous pleasure.

Hygiene is one thing, looking like a prepubescent girl is another. I’ve always kept myself groomed, but I’ve always felt rather ashamed. Given my experience, that’s hardly surprising.

A new partner
When I started seeing someone new a few months ago, I was forced to address that shame in a way that many of my female peers don’t. I found myself in a relationship with that rare and wonderful creature: a male feminist. He declared that every woman he had ever been with had been completely hairless, and he thought this was silly.

When he asked me why I subjected myself to uncomfortable and irritating maintenance for the sake of an arbitrary male preference, I could not give him a sensible answer.

My reason for grooming myself to fastidious excess was the belief that the way I look naturally – which, incidentally, I had not seen for years – is repulsive. That is not a good reason. In an attempt to challenge myself, I wanted to see what would happen if I simply let my hair grow.

As I watched it return over time, I was astounded by my own discomfort. It was growing where it “shouldn’t”. Its expansion across my previously prim groin felt invasive. Like an uncontrollable, drunken female, it reeled across my body with unacceptable confidence.

My sense of conforming to what is considered acceptably feminine was lost, and I did not feel comfortable. I was breaking all of the rules set out for women of my generation, and I felt I could not be anything but ugly.

How odd, then, to encounter a man who neither fetishises nor vilifies a real female body as it is in its natural state, but simply accepts and rather likes it.

I’m no less uncomfortable, however. The fact that it took a man to inspire me to challenge myself in this way shows that I have, at least to some extent, been complicit in my own duping. I’m not the only one.

How wearing a face mask affects the impact of exercise
9

Airborne coronavirus: What you should do now to help yourself stay safe
10