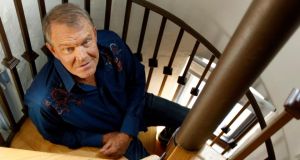 Glen Campbell revealed in June 2011, a month before this photograph was taken, that he had Alzheimer’s disease, saying it had been diagnosed six months earlier. Photograph: Matt Sayles/AP

Glen Campbell, the sweet-voiced, guitar-picking son of a sharecropper who became a recording, television and movie star in the 1960s and 1970s, waged a publicised battle with alcohol and drugs and gave his last performances while in the early stages of Alzheimer’s disease, died on Tuesday in Nashville, Tennessee. He was 81.

Tim Plumley, his publicist, said the cause was Alzheimer’s. Campbell had been living in a Nashville care facility.

He revealed in June 2011 that he had Alzheimer’s disease, saying it had been diagnosed six months earlier. He also announced that he was going ahead with a farewell tour later that year in support of his new album, Ghost on the Canvas. He and his wife, Kimberly Campbell, told People magazine that they wanted his fans to be aware of his condition if he appeared disoriented onstage.

What was envisaged as a five-week tour turned into 151 shows over 15 months. Campbell’s last performance was in Napa, California, on November 30th, 2012, and by the spring of 2014 he had moved into a long-term care and treatment centre near Nashville.

His farewell tour and the way he and his family dealt with the sometimes painful progress of his disease were chronicled in a 2014 documentary, Glen Campbell: I’ll Be Me, directed by actor James Keach. Former US president Bill Clinton, a fellow Arkansas native, appears in the film and praises Campbell for having the courage to become a public face of Alzheimer’s.

At the height of his career, Campbell was one of the biggest names in show business, his appeal based not just on his music but also on his easygoing manner and his apple-cheeked, all-American good looks. From 1969 to 1972, he had his own weekly television show, The Glen Campbell Goodtime Hour. He sold an estimated 45 million records and had numerous hits on both the pop and country charts. He was inducted into the Country Music Hall of Fame in 2005.

Decades after Campbell recorded his biggest hits – including Wichita Lineman, By the Time I Get to Phoenix and Galveston (all written by Jimmy Webb, his frequent collaborator for nearly 40 years) and Southern Nights (1977), written by Allen Toussaint, which went to No 1 on both pop and country charts – a resurgence of interest in older country stars brought him back on to many radio stations.

Like Bobbie Gentry, with whom he recorded two Top 40 duets, and his friend Roger Miller, Campbell was a hybrid stylist, a crossover artist at home on both the country and pop charts.

“A change has come over country music lately,” he explained in 1968. “They’re not shuckin’ it right off the cob anymore. Roger Miller opened a lot of people’s eyes to the possibilities of country music, and it’s making more impact now because it’s earthy material, stories and things that happen to everyday people. I call it ‘people music.’”

Glen Travis Campbell was born on April 22nd, 1936, about 80 miles southwest of Little Rock, Arkansas, between Billstown and Delight, where his father sharecropped 120 acres of cotton. He was the seventh son in a family of eight boys and four girls. When he was four, his father ordered him a three-quarter-size guitar for $5 from Sears, Roebuck. He was performing on local radio stations by the time he was six.

Picking up music from the radio and his church’s gospel hymns, he “got tired of looking a mule in the butt,” as he put it in an interview with the New York Times in 1968. He quit school at 14 and went to Albuquerque, New Mexico, where his father’s brother-in-law, Dick Bills, had a band and was appearing on both radio and television.

After playing guitar and singing in what he called “fightin’ and dancin’ clubs” in Albuquerque with Bills’s band, he moved to Los Angeles at 22 and in 1960 got a job playing with the Champs, a rock ‘n’ roll group best known for its 1958 hit Tequila. There were also stints with other, smaller bands, for smaller money.

But his skills eventually took him into the recording studios as a session musician, and for six years he provided accompaniment for a vast number of famous artists, including Frank Sinatra, Dean Martin, Nat King Cole, Elvis Presley, Rick Nelson and groups such as the Beach Boys and the Mamas and the Papas. Although Campbell never learned to read music, he was at ease not just on guitar but also on banjo, mandolin and bass.

He wrote in his autobiography, Rhinestone Cowboy (1994) – the book took its title from one of his biggest hits – that in 1963 alone, his playing and singing were heard on 586 recorded songs.

After playing on many Beach Boys sessions, he became a touring member of the band in late 1964, when its leader, Brian Wilson, decided to leave the road to concentrate on writing and recording. Campbell had made his first records under his own name in the early 1960s, but success eluded him until 1967, shortly after he signed with Capitol Records, when his recording of John Hartford’s Gentle on My Mind hit the charts. Shortly after that, his version of By the Time I Get to Phoenix reached the Top 40. National recognition, four Grammy Awards in 1968 and television appearances quickly followed.

In 1969, Campbell had his most famous movie role, the nonsinging part of a Texas Ranger who joins forces with John Wayne and Kim Darby to hunt down the killer of Darby’s father, in the original version of True Grit. (Matt Damon played the part in the 2010 remake.) The next year, he and Joe Namath played ex-Marines in Norwood, based on a novel by Charles Portis, the author of True Grit.

Campbell made his Las Vegas debut in 1970 and, a year later, played at the White House and for Queen Elizabeth in London.

But his life in those years had a dark side. “Frankly, it is very hard to remember things from the 1970s,” he wrote in his autobiography. Though his recording and touring career was booming, he began drinking heavily and later started using cocaine. He would annoy his friends by quoting from the Bible while high. “The public had no idea how I was living,” he recalled.

In 1980, after his third divorce, he said: “Perhaps I’ve found the secret for an unhappy private life. Every three years I go and marry a girl who doesn’t love me, and then she proceeds to take all my money.” That year, he had a short, tempestuous and very public affair with the singer Tanya Tucker, who was about half his age.

He credited his fourth wife, the former Kimberly Woollen, with keeping him alive and straightening him out – although he would continue to have occasional relapses for many years. He was arrested in November 2003 in Phoenix and charged with extreme drunken driving and leaving the scene of an accident. He pleaded guilty and served 10 nights in jail in 2004.

Woollen, who like Campbell was an evangelical Christian, married him in October 1982. They had both been baptised on a chilly December day in 1981 in Campbell’s old swimming hole in Billstown.

Throughout the 1990s, he remained influential. Campbell released a series of gospel albums in the 1990s, and in later years made frequent appearances on evangelical television shows. In 1992, he began performing in Branson, Missouri, and in 1994, he opened the Glen Campbell Goodtime Theatre there. (The theatre was renamed in the 1990s after he ended his association with it.)

His survivors include his wife and eight children: Debby, Kelli, Travis, Kane, Ashley, Cal, Shannon and Dillon. Three of them were in the band that backed him on his farewell tour.