Dad, can we please not talk about old people shifting? 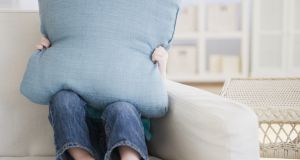 I was reminded of that time in the school yard in first class when my best friend Majella informed me of how babies were really made. Photograph: Getty Images

At what point does it become okay for your Dad to make dirty jokes in your company? I always thought this was the rubicon of parenting, the line which may never be crossed.

It seems, however, that my father has bypassed the consultation phase and cut fast and loose into the unknown.

A few months ago we took Mum out for dinner for Mother’s Day. She was gushing about how good we were to treat her to the meal, to which I replied: “You deserve it Mum, sure you squeezed us all out”.

Stephen, the middle child, bowed his head, shook it slowly and put it in his hands

Without a second thought, Dad retorted: “And what about me? I squeezed ye all in!”

Cue the howling laughter and streams of joyful tears as he watched our disgust.

My youngest sister, Ellen, made a vomiting gesture before getting up and leaving the table. Stephen, the middle child, bowed his head, shook it slowly and put it in his hands.

Mum cowered in the corner, not knowing whether to laugh or cry, but somehow managing to do both.

The whole debacle left me wondering, how did it come to this?

Long gone are the days when he would switch off 7th Heaven for that part when the Dad was talking to the kids about the risks of teenage sex.

I remember Mum threatening to cut off the Sky subscription once if she caught us watching Christina Aguilera’s Dirty video on MTV again. God forbid our innocent minds be polluted by leather chaps and bare arses.

But all has changed, irrevocably.

I was in a pub with the pair of them once when someone commented on how mine and Stephen’s birthdays were within two days of eachother in December.

Thinking back now though, I don’t know why this sudden loosening of joke rules came as a surprise to me, as I had been pushing the boundaries myself for a while.

Last year Dad and I had gone to visit an old friend of his in Co Cavan who he had worked with as a young fella in London many moons ago. This friend never really settled down after he came home a couple of decades ago, at that point already in his 60s and well accustomed to his lothario lifestyle.

I think he must have another new girlfriend

That didn’t stop him from dabbling in the local dating scene, a game of hearts which he thrived at.

Dad often rhymed off his friend’s list of current girlfriends like it was a verse from Mambo No 5:

“A little bit of Mary in my life,

A little bit of Dympna by my side,

A little bit of Josephine is all I need,

Women who texted him about local death notices and left mysterious gifts like soda bread and Motorola phones in his car.

“I think he must have another new girlfriend,” Dad said to me, on our way home from visiting him.

Indeed I agreed his compatriot seemed very optimistic about his night out; his shoes shined and face cleanly shaven as he paced the floor wondering when we might get the hint and leave him at it.

He seemed to have reached a very pleasant autumn of his life, spending his days cat-napping, putting up fences and going to any funeral he could find. But maybe there was more.

“You call them girlfriends, Dad, but sure it’s only the company he’s looking for. I mean, old people don’t be kissing and stuff, do they?”

A big rumble of laughter burst out from his chest as he looked across at me in disbelief, wiping tears from his eyes as he howled in amusement at my naivety.

This was not the kind of response I had been looking for.

Old people shifting? This can’t be right. No way.

I was reminded of that time in the schoolyard in first class when my best friend Majella informed me of how babies were really made.

“No way, my Mammy wouldn’t do that,” I told her. I believed it too.

“You mean he still has . . .?” I asked Dad, trailing off before I could bring myself to finish.

He let out another howling guffaw before sticking his fingers in both his ears and shouting “na na na na na na na”, mocking both mine and his horror and disgust at such a thought.

“No wonder he’s always napping,” I said, with a wink.

Not so funny now, is it Dad?