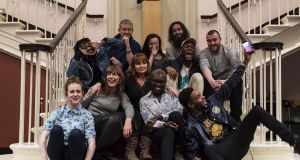 “What I always think about in terms of art in any form is tolerance,” says 16-year-old spoken word artist Natalya O’Flaherty.

“People may not understand why I’m doing what I’m doing or what I’m saying when I'm saying it, but for people to just give us the platform… just give us the opportunities and we’ll use them and we’ll show you that it’s worth it,” she told Róisín Ingle, presenter of the Róisín Meets podcast.

The performer, who was born and reared in Neilstown in west Dublin, was introduced to spoken word at the age of 12 through her school's creative writing group InkLinks, where she met local writer and performance poet Colm Keegan.

Shy when she was younger and with the nickname 'Mouse', her first performance was "a shite show", she said, but her confidence grew with every compliment that she got and now she is preparing for her biggest show to date.

Young Blood: The beats and voices of our generation at the National Concert Hall next Saturday 18th March, as part of the St Patrick’s Festival, where Natalya will share a stage with her mentor Colm Keegan.

Also on the bill is fellow Dubliner Katie Laffan, who has been making music in her bedroom ever since she taught herself how to play guitar through YouTube tutorials. The 20-year-old put a band together in her teens and started performing live, but soon realised she still had a lot to learn.

“I didn’t know things like you need a tuner pedal with you on stage. I thought you just tuned beforehand. Eventually it got so bad that I played a whole gig out of tune,” she said.

Annette Udell, who would become her manager, was in the crowd that night but luckily she saw through the noise to the talent below, took her under her wing and helped to whip her into shape.

It has worked out well and Katie said she is thankful that both Annette and Young Blood creator Aoife Woodlock – of Other Voices fame – have taken a punt on her.

You can catch Katie and a host of other talent at Young Blood: The Beats and Voices of Our Generation at the NCH Dublin, March 8th

You can find more information on the St Patrick's Festival here: www.stpatricksfestival.ie/