This is the full Q+A transcript of the interview between Derek Scally of The Irish Times and the President of the Federal Republic of Germany, Joachim Gauck 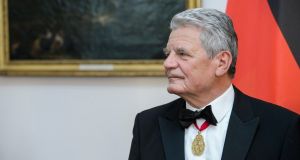 1. For decades our island, thanks to Heinrich Böll’s “Irish Journal”, served as kind of surrogate homeland for many West Germans. As a former East German, what cultural or political significance did Ireland have for the GDR?

Heinrich Böll’s Irish Journal was read in the former GDR, too. For some people, Ireland was a kind of dream land - a country with wild coasts, with a joie de vivre combined with melancholy, where people faced the question of whether to stay or to leave. For us in the GDR, where I’m from, this was also a crucial question and a particularly dangerous one. We Germans and the Irish have always been connected by the fact that we have both suffered from the division of our own countries. And so the end of the division of Germany most likely instilled hope in the Irish, too. Moreover, both our countries have long since shared a passion for language and literature.

2. Some 1,300 years ago it was Irish monks who brought Christianity back to Europe, like Kilian in Würzburg in Frankonia, northern Bavaria. As a former man of the church, how does this echo for you personally?

If you imagine yourself living in the lively times of the early Middle Ages, you can only be amazed, such is the intensity with which the debate over the right beliefs and true values was hashed out. The Iro Scottish monks’ movement significantly influenced the formation of Christianity in Germany, as well as state and society as a whole. I’m very impressed by the monks’ conviction and perseverance: they embarked on arduous journeys of thousands of kilometres in order, in foreign languages and unknown cultures, to make people understand their beliefs, to evangelise. They gave Christianity a new home here.

3. Our bilateral relations were for a long time unburdened, as Germany never was at war with Ireland. However the eurocrisis has seen a rise in pejorative terms in the Irish public debate, terms like “the Germans” or “German banks”. Does this concern you? How can this be turned for the positive?

This ‘euro crisis’ is, in no uncertain terms, putting all of Europe to the test - the EU, the eurozone, the member states and many individuals, their livelihoods and everyday lives. I am fully aware of the enormous personal sacrifices and tough cuts the people of Ireland have been forced to accept in order to overcome economic and social difficulties and a high level of unemployment. Yet the Irish can now look back on real successes.

At the moment, I’m particularly concerned about the rampant anti-European populism in many of the EU’s member states. In this regard I can only warn that the European peace project, based on our shared values, is simply too valuable. We cannot let the sphere of public discussion be taken over by radical anti-European forces from the left or right. We - by which I mean all those of us who represent Europe’s values - must speak up in political debate. In doing so we should foster more understanding for the different perspectives of our European partners and ensure that even when our opinions differ, we maintain a respectful, objective and productive exchange. This will enable us to maintain our mutual trust and overcome difficult times together.

Moreover, neither the Germans nor the Irish should forget what it is that binds us, even beyond Europe, namely our shared commitment to human rights, peace and development in the world. The foundation of our bilateral relations was and remains stable, our governments and parliaments engage in a close and trusting exchange. When it comes down to it, the crisis has not changed that.

4. While Ireland’s president, Michael D. Higgins, has described as inacceptable the high social cost of the eurocrisis, warnings from Germany have been more concerned with breaching the euro rules (Stability Pact, ECB sovereign bond-buying etc.). Why is the German view of Europe now so narrow and technocratic?

I think there’s a misunderstanding here. The German perspective is not blinkered and neither is it technocratic, rather it’s focused on Europe and on solidarity. Nevertheless, a monetary union requires rules in order to function. And in fact the rules of the economic and monetary union, which we set out together, don’t stipulate any concrete social policies or indeed any cuts in social budgets. If there have been very painful cuts in this sphere it has been to prevent further difficulties and to overcome the crisis.

In Ireland I would call it a banking crisis. All around the world, banking sectors were not sufficiently supervised. The eurozone is not the only one to be struggling with the consequences of this. Reforms, including in the sphere of social benefits, were a way of making public finances sustainable once more and boosting the economy’s growth and competitiveness in a lasting manner. I have great respect for the progress that Ireland has achieved. And I don’t underestimate the high price that many Irish have had to pay along the way. That is why, during our official visit, Daniela Schadt and I will in particular inform ourselves of the efforts made in this country to find a way out of the crisis.

5. At the 50th Munich Security Conference in 2014 you encouraged Germany to accept more responsibility in the world. Are you satisifed with what has happened since then?

I’m pleased that this important topic has been intensely debated for some time now, we must continue it. Especially in light of the various international crises we need even more clarity on how we intend to shoulder our responsibility in European and foreign policy terms from now on. Together with its European and transatlantic partners, over the past two years Germany has already taken on an even more active role, be it in the conflict in eastern Ukraine, in northern Iraq or in combating Ebola as well as of course in the ‘euro crisis’. These completely divergent scenarios show how comprehensive our conflict management skills and resources already are. Even if there is room for improvement, I’m very glad that we’re so involved in many fields.

6. The Irish people have recently voted in favour of marriage equality, the US Supreme Court too. What do you wish on this matter for your country?

I was impressed by how sincere and engaged the Irish people were in tackling this question. The way I perceived it, it was not a vote against but rather for something. Personal experience has led me to be in favour of anything which liberates people and releases them from estrangement. I thus hope that Germany can also have a stronger debate in which people are not overwhelmed by a feeling that equality between themselves and others is taking something away from them or posing a threat to their own way of life. It should be made clearer that enabling homosexual people who wish to live in a legally binding partnership to do so gives them the chance to live a life of equal value in love and partnership.