From the archives: Maeve Binchy interviews Eileen Gray in Paris

Originally appearing in the Irish Times on February 16th, 1976, author Maeve Binchy met designer and architect Eileen Gray in her Paris home just months before she passed away aged 98 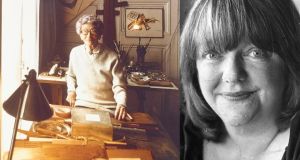 Eileen Gray is 97, and, so she says, finds that she doesn’t work as she used to. She had some chairs to finish, and she wasn’t at all happy – about the lines, of the backs, so perhaps I would forgive her if she didn’t talk for long.

She sat in her huge apartment on the Rue Bonaparte surrounded by the furniture she has been designing for 70 years. She has lived in the place for over 60 year s and says that even if her sight went she could find her way around quite happily. The huge screens, done in 1948, the chairs from the 1920s, the tables, the fabrics ranging over the whole of this century: they have been in the same places for a long time . . . they are all familiar.

Eileen Gray arrived as an Irish immigrant to Paris in 1902. She didn’t really intend to stay there forever, but somehow things worked out that way. It was very different to home in Wexford, a big house near Enniscorthy, where her brothers were much older and always seemed to be away at school, where she had governess after governess and thinks she wasn’t very well educated because these girls were always hired according to their manners and how they would fit into a family, rather than for how much they knew. It was a happy childhood that seemed like one long sunny summer when she looks back to it, days and days of being with the horses and down by the river, and picking great branches of flowering bushes for the house.

They used to go to the Dublin Horse Show and her mother would walk around dreamily looking at the great hunters and show jumpers and saying how nice it would be to have horses like that at home.

Eileen Gray’s father was an artist and he painted a lot in Italy. She says that sometimes she used to take a boat out by herself on the River Slaney and it all looked so peaceful and beautiful that she couldn’t understand why he had to spend such a long time in hot landscapes where even the ground and walls looked parched in villages instead of painting cool green things that were shiny and silky in Wexford. She doesn’t really know to this day why he spent so much time away but she thinks that he was just happy there – or happier than he would have been at home anyway. That’s why people do things. She herself went to the Slade School in London and worked with a Japanese craftsman who taught her lacquer work.

This man, Sugawara, who was later to teach other famous pupils, urged her to be adventurous and use her own heart when she was designing something, not to be hemmed in by thinking that there was a way or a style or a method. This made excellent sense to her even when she was so young and inexperienced, and she went straight ahead and designed brilliant red lacquer screens , decorated with blue “and silver figures. One of them sold for over £14,000 in Paris some months ago.

And then the first World War came, while Eileen Gray was a young and becoming-talked-about artist in Paris. She drove an ambulance. She left her new rich clients who had “discovered” her and she spent the four years doing war work of one sort or another. And then calmly , when it was all over in 1918, she took up where she had left off.

She thought she had better open a gallery and she did, in 217Faubourg St Honore, and she had three little workshops too , where craftsmen made everything she needed. And people kept coming to the gallery and talking and suggesting this and that commission and during the 1920s and ’30s Eileen Gray couldn’t have had more success. The real reason was because, an immensely free woman, she remembered the advice of the Japanese lacquer teacher and didn’t allow herself to follow anyone else’s plan. While everyone- else thought in straight lines and cubes and right angles, Eileen Gray thought in curves and round shapes. While the other designers thought that rooms were things with four walls and a door, Eileen Gray didn’t see what that had to do with living at all. She designed a tiny little one-room flat for a friend, an open plan, where she lowered the ceiling and had great screens dividing it up into living areas.

Her friend had meant the flat to be a little hidey-hole for himself. It became instead a Paris showpiece. And then there was her famous house at Rocqbrune. Eileen Gray had become a great and close friend of Le Corbusier by this stage, and he was always saying that she had designed her “trans-Atlantic” chairs two years before he did his famous chaise longue that everybody was always talking about. Corbusier was always around encouraging her; her first house at Rocqbrune in the south of France was such a success that artists and architects were coming from all over the world to see it.

They were astounded that someone without any real training in architecture should have been able to do it. It was described as a “virtuoso demonstration of all her abilities” in the design journals of the time, and it is a tribute to her that people still go to see the house because of her own futuristic work and not just to see the murals that Corbusier had done for her.

And then, into her years in Paris came a second World War and after that Eileen Gray didn’t design any more houses. She did chairs and screens and carpets and cabinets. And the demand for her work increased because she was always just that little bit ahead of everyone else; she never set a real style that people deliberately followed and that had her name to it, but she always seemed to be bound by no preconceived ideas herself.

She sits in her lovely treasure house, back very straight, wearing a high-necked white blouse a cameo brooch, everyone’s picture of demure, elderly aunt. Yet the furniture and the pictures belie her. All around there are memories of a far-from-demure life. Even the pictures of herself in modern-looking frames show a girl with high cheekbones, strong eyebrows and a shingled haircut probably shaped months before anyone else had the courage to have it done. She is pleasantly vague about her friendships and lifestyle over the last 74 years in Paris. She is not the kind of person you would dare to question about it, either. She looks too frail and gentle to have to talk about racy days, and flying in a plane with a crowd of Frenchmen when nobody in the world thought it was safe.

She is very modest about her work, and seemed surprised that any one should remember her except her individual clients. A few years ago when the Royal Institute of Irish Architects had arranged an exhibition of her work in Dublin, people had been amazed to see the dates on things that looked as if they were much more modern. She said she got a few letters from Irish architects and artists, which pleased her very much, she had them in a little file still called “Irlande” and she hoped that she had remembered to reply to them all.

Yes, she had been back to Ireland a few times, but very briefly, and once by chance when she found that a plane was going to stop over there. She decided to get off and go and look at her old home, and she thought she would have again all those lovely feelings of peace and innocence like she had as a child. But it had changed, and nothing was the same. It wasn’t just that everything – the lawns, the fields, the river – were smaller; she knew that would happen. It was all knocked down and built again, in a most unimaginative style. It made her sad. She never went back again.

And she lives in comfort but not in idleness with a marvellous woman called Madame Dany who is a Breton housekeeper/companion/dragon. Madame Dany sees that she eats enough and rests enough and doesn’t get weary talking to journalists for too long.

So Eileen Gray got up and said that she must finish those chairs, because, my dear, I am nearly 100 you know, and it would be foolish to think that I will have unlimited time to finish them the way I want them to be.

Did we say find a sex buddy? That’s not quite what we meant, say Dutch officials
8