Team games dominate our competition to find the best club, but niche sports are well represented 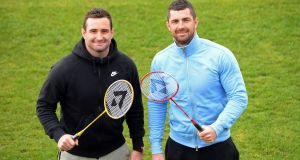 More than 600 people have now entered the The Irish Times Best Sports Club in Ireland competition. Gaelic games is the most popular category, making up 40 per cent of all entries so far. Within this, Gaelic football is the most popular game. Rugby is next biggest, followed by soccer and kickboxing.

It’s not all about the big field-based team games. A variety of clubs have been nominated, some of them playing sports that were unknown to us prior to the competition. Blind golf, power-chair soccer, dragon-boat racing and roller-derby clubs all feature. Over the course of the contest, we will make a special effort to highlight some of these minority sports.

The nominated clubs come from almost every county in Ireland (only Longford and Tyrone are missing so far). Dublin leads the nominations, but Carlow – helped by an apparently active kickboxing scene – is the next most popular county for nominations.

The Irish Times is inviting reader to write a short pitch for a club they know and love, at irishtimes.com/bestsportsclub. Submissions will be accepted until mid-May.

The winning club, to be announced in June, will receive €5,000, with a further €1,000 for another deserving entrant. Both awards will be provided by the National Dairy Council, the competition’s sponsor.

The winner will be decided by a panel of judges chosen by The Irish Times. They will make their decision based on community involvement, club spirit, sporting achievement and other criteria.

Here is a flavour of the entries so far:

Fenor is a tiny Co Waterford club long overshadowed by bigger – and, success-wise, better – neighbours, but who eventually had their season in the sun.

Its 130th anniversary year, 2015, will go down in the annals of Fenor GAA Club, based in a village with a pub, a school, a nature reserve and a pitch.

CLG Fionnúir was founded in 1885, though football in the parish pre-dated the official GAA. However, it wasn’t until last October that it clinched a county hurling title for the very first time, during an emotional afternoon in Walsh Park.

Supersub Sean Cheasty scored the dramatic injury-time winning point to secure the junior championship at the 13th attempt. This after Fenor’s 12 previous county hurling final appearances had all ended in defeat.

The final whistle sparked scenes of green and white-clad jubilation. A recording of a teary-eyed rendition of Wild Mountain Thyme from the winners’ dressing-room went viral on social media.

It was fitting that captain Jim Halley, whose family’s connections with the club go back to the earliest days, lifted the cup, a trophy that had eluded many fantastic Fenor servants since the club entered the hurling ranks in the late 1960s.

The Fenor area was hard hit by emigration and retirements, so a reciprocal assist from nearby football club Kill in 2014 breathed new life and hope into both, culminating in successive respective county titles.

Last December, a history of the club was launched by none other than Micheál Ó Muircheartaigh, who said the title of the publication couldn’t be more apt: Fenor – The Club That Never Gave Up.

DCU Storm: 'This club allows players to do something independently’

Can you score a goal if you can’t kick a ball? Can you roam the pitch while sitting still? Can you realise a dream you never thought you had? The answer is yes.

Powerchair football is an adaptation of normal soccer for those who use power wheelchairs. Players pass, dribble and strike the ball with a guard attached to the front of the chair.

DCU Storm is a powerchair football club based in Dublin City University. It is the only dedicated disability sports club across Irish colleges that caters for people with severe physical disabilities. Every year the club competes in the Association of Irish Powerchair Football national league and cup.

For the past two years, DCU Storm has finished first and second in respective league and cup competitions. The team will travel to Denmark in October to compete in the European Champions Cup. Four team members have competed internationally for Ireland, with one receiving the FAI “Football For All” International Player of the Year Award in 2015.

The club is developing a second team that puts greater emphasis on the social and recreational aspects of the sport. Aside from its achievements on the pitch, this club allows players to do something completely independently without the help of others. For the players, this has no price, as they are dependent on others in so many other aspects of their lives.

Tipperary Kickboxing Club has achieved so much since opening a couple of years ago. We work together to make sure each fighter in the club achieves what they want. We have national titles and, in 2014, a group of five went to compete in our first world event, the Unified World Martial Arts Championships in Italy, and brought home two bronze medals, two silvers and one gold.

The club is going from strength to strength, and our coach will give up anything to give us the training we need. We are not only a club, but a family that is working together to achieve goals in its chosen sport.