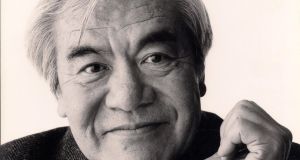 Jimmy T Murakami, who has died after a brief illness at age 80, was a Japanese-American animation director who lived in Ireland since 1970.

Born Teruaki Murakami in San Jose in 1933 to Japanese parents, during the second World War he was interned with his family when the United States entered the war. The internment camp was at Tule Lake, a desert wasteland in northern California. Obliged to choose a western name, he chose Jimmy after the actor Jimmy Stewart. (His brother Junichi chose James.)

Following his release in 1946 he completed schooling and went on to study art and animation at the Chouinard Art Institute. In 1956 he joined UPA Burbank Studio for a year, then moved to Pintoff Studio in New York, where he animated The Violinist , an Oscar-nominated short.

After a year at Toei Animation in Tokyo, in 1960 he moved to London as a producer and director at TV Cartoons. There he directed The Insects (which got a Bafta nomination) and Charley (a Venice Gold Lion winner) among other short films.


Murakami Wolf
Returning to Los Angeles in 1965, with Fred Wolf he established Murakami Wolf as a studio for theatrical shorts, television specials, documentary films and commercials. He won the Annecy Grand Prix for Breath , directed the Oscar-nominated The Magic Pear Tree , And o f Course You (Golden Eagle award), The Good Friend (inaugural AFI grant) and many other films.

He returned to LA in 1980 to direct another live-action feature, Battle Beyond the Stars , (on which he gave James Cameron his first job as art director). Jimmy always regarded himself as a film-maker rather than an animator.

In 1982 at TVC London he was supervising director on The Snowman , one of the best-loved animated films, which won a Bafta and was Oscar nominated, based on the Raymond Briggs book. In 1986 he adapted and directed another Briggs book, When the Wind Blows , which won the Feature Grand Prix at the Annecy Animation Festival in 1987.


‘Teenage Mutant Ninja Turtles’
In 1989 he helped Wolf to establish Murakami Wolf in Dublin to produce Teenage Mutant Ninja Turtles , the long-running TV series. The studio had a staff of more than 100 artists. Jimmy continued to work in Dublin and overseas, directing The Storykeepers TV series in Dublin in 1995, Inspector Mouse in Paris in 1997 and Oi Get Off Our Train in London in 1998.

He directed another animated feature in 2000 in London, Christmas Carol: t he Movie (with Kate Winslet performing and singing) and a music video with Kate Bush in 2005.

Throughout all his years in Dublin he tutored, mentored and lectured young aspiring animators. The current healthy animation sector in Ireland is due in no small measure to his continuous involvement.

He was a regular guest lecturer at IADT Dún Laoghaire and the Irish School of Animation Ballyfermot. In recognition of his contribution to the world of animation, Dundee University awarded him an honorary doctorate in 2006. Last March, Dingle International Film Festival inaugurated the annual Murakami Award in his name.


Love of painting
Last year he celebrated his 80th birthday developing The Morning of a Hundred Suns , a feature film based on his reaction to the Hiroshima bomb. He had also returned to his original love of painting, working in oils and watercolours, figurative and landscapes. At the time of his death he had commissions for several new works.

A regular invited guest at film festivals around the world, Jimmy invariably held audiences spellbound with stories and reminiscences. His life experiences were extensive and enriching, and he delighted in sharing his insights.

Jimmy is survived by his wife Ethna, daughters Deirdre and Claire, and four grandchildren: Keelin, Rory, Finn and Tara.