Flight school is like Google Earth on steroids – can I have another go? 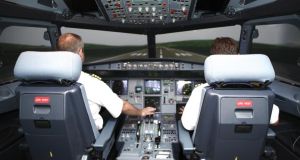 For a moment, it seems like I may have wandered into the auditions for some exotic Next Top Model TV series, as an unfeasibly glamorous troupe of girls and boys in their 20s passes through the hallway in front of me, all in matching red jumpsuits. In fact, it’s a new generation of airline flight crew in the middle of a rigorous induction programme. I’m visiting Turkish Airlines Training Centre at Istanbul’s Atatürk Airport to see its state-of-art flight simulators

; and for a boy who likes toys, it’s like Santa’s accidentally left the whole sack at the bottom of the chimney.

It’s not just Turkish Airline’s own crews who get put through their paces here: this vast facility is the go-to resource for training in the region, with dozens of other airlines using it for their pilots and crew too. Before I’ve even seen the flight simulators, frankly, I’m buzzed. In a huge hanger-like space (and it needs to be), there is a pair of sectioned plane bodies (an Airbus A340 and Boeing 737 for partial plane spotters) like giant half-completed Airfix kits, with wings and tail sections still to be glued on.

These aren’t flight simulators as such, they’re Crew Emergency Evacuation Trainers – CEETs. Inside each is a full cabin set- up as you’d expect, from the pilots’ cockpit to the crew kitchenette, with screens showing the notional outside view on the window portholes to complete the conceit. The trainer is up on massive hydraulic jacks and it can reproduce all sorts of potential emergency situations. Smoke in the cabin. Severe turbulence. Fire in the hold. These on-board conditions change at the press of an iPad, like it’s running some sort of Truman Show app, summoning up the elements and controlling the weather at the slide of a finger. The experience is so completely immersive, my brain surrenders to the fakery in an instant and I find myself bracing for a generated landing on water.

These CEETs even allow practice evacuations by slide – with a huge pool beside one of the planes and another pair sliding onto terra firma. The inflatable slide has to be tried, needless to say, just to be entirely professional and conscientious. All heads swivel as I interrupt the trainees’ concentration around the hanger with an involuntary whoop. It’d be rude not to.

The cockpit flight simulators are housed separately behind secure doors. It’s not surprising, with each one costing upwards of €13.25 million. Turkish Airlines has six full flight simulators and I’m getting to go in one of its A320-200 units. Looking like shiny-white space pods ready for take-off in a sci-fi movie, the simulators are the size of very large caravan, perched on tall, spindly legs. You get into one via a detachable gangplank, as these expensive high tech babies buck and toss and tilt viciously to create the on-board sense of movement.

Even more mind-codding than the CEET, the cockpit is totally accurately recreated, with a projected 3D video rendering the outside world through the windows on all sides. This virtual reality is compounded by the six-axis motion that matches the moving pictures with the simulator motion, which responds to the pilot’s actions. We start rolling down a runway, picking up speed, feeling every vibration, till the ground begins to slip away beneath us and Atatürk Airport falls away gently below. Banking around, we tilt and the buildings’ 3D perspective seamlessly changes with startling realism.

In an instant, we’re on a dizzying flyover of Istanbul, straddling the Bosphorus, the historic fulcrum of Europe and Asia. We fly up the busy corridor far lower than would be permitted in an actual aircraft and slant, banking smoothly again to circle world famous landmarks like the soaring minarets of Hagia Sofia and the exquisite Blue Mosque below. The detail is seductive, like the studding of the virtual waterway with cargo ships and ferries, and the landscape beyond apparently stretching out as far as the eye can see. The nerd in me starts wondering about how much data must be processed to create this amazing simulacrum. This is Google Earth on steroids.

My pilot trainer generously lets me have a brief go on the controls and I succeed in not landing us in the drink nor pranging an ancient minaret. We get to play weather God once more and conjure up a wicked storm for the landing. Rain lashes the windscreen as our cloud-addled visibility drops away. The runway lights suddenly hurtle into view and we land with an expertly light bump as the engines roar up to throw out the anchor. The virtual weather switches quicker than a Connemara summer day, and Istanbul airport clicks into sunshine again. I’m vaguely dazed leaving the simulator, like emerging from a dark pub into bright sunshine. What a blast. Santa, I haven’t been too bad: how about another go?

Tom Kelly was a guest of the Turkish Airlines Flight Training Centre. Turkish Airlines has direct flights 14 times a week from Dublin to Istanbul. www.turkishairlines.com See Conor Pope on the fear of flying, page 8