Five Go on a Treasure Hunt: We gave five treasure hunters €100 each and sent them off to flea markets and car-boot sales to seek bargains. So how much would the five items fetch at auction? The news is not good

We gave five treasure hunters €100 each and sent them off to flea markets and car-boot sales to seek bargains. So how much would the five items fetch at auction? The news is not good. Video: Darragh Bamrick 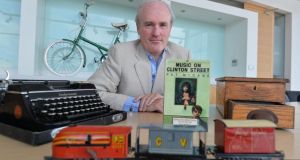 James O’Halloran of Adam’s Auctioneers valuing the objects that were purchased as part of our Five Go on a Treasure Hunt series. Photograph: Alan Betson

You have finally got around to clearing the attic. While leafing through yellowing copies of An Claidheamh Soluis and The Illustrated London News stored in a brass-bound mahogany trunk, you discover a neatly folded, original copy of the 1916 Proclamation: €100,000. A dinner-party guest, with an eye for that sort of thing, discerns that your mantelpiece ornament is a Chinese imperial vase: €250,000. While planting roses, your trowel strikes metal and you scoop away the clay to reveal a Celtic torc: priceless.

Ah, who hasn’t dreamed the dream? Sadly, such Antiques Roadshow moments are rare. But they do happen. In the last year, a man in the midlands walked into Sheppard’s auctioneers in Co Laois with a bag of bits and pieces inherited from his mother, one of which turned out to be a Chinese Qing period jade box, which sold, to his astonishment, for €36,000.

Over the past five weeks, our five treasure hunters were each given €100 to go “bag a bargain”, and have each reported on their purchases. They all found items within the budget, which they submitted to be assessed and valued by James O’Halloran, managing director of Adam’s Auctioneers.

Here’s what he found:

What he bought: A signed first edition of the 1986 novel Music on Clinton Street by Pat McCabe.

Why? “As the great man’s first novel for adults, released in a relatively small print run, it has a good chance of making us a small profit.”

James O’Halloran’s verdict: “Donald is on the right track in terms of the collectability of rare books, but, sadly, in this instance I think he has backed a loser, not least because McCabe’s two subsequent Booker-nominated novels (The Butcher Boy and Breakfast on Pluto) have captured pretty much all the limelight.”

What she bought: A tin-plate model train by British toy-maker Chad Valley consisting of a Prince 6220 engine, two non-matching carriages, and a section of track.

Why? “I know nothing about tin-plate toys or trains, but it might be promising, I think.”

James O’Halloran’s verdict: “There is an entire industry trading in antique and vintage toys, and model trains are well up there in the popularity stakes alongside teddy bears. While Rosita’s trains may not be hugely valuable, her thinking was spot-on.”

Rosita also bought a carved wooden box for €20 but entered the train instead. The box was valued at €150. Oops.

What he bought: A Triumph 20 bicycle made by Raleigh in Ireland about 30 years ago.

Where? A stall at the Dublin Flea Market, held on the last Sunday of every month at Newmarket Square, Dublin 8.

Why? “As I’ve grown older and my tastes have become a little more, eh, feminine, I am full of admiration for Triumph 20s. Beautiful and well-designed, they are a perfect expression of a girl’s shopping bike.”

James O’Halloran’s verdict: “The saddest thing of all – it’s not a Chopper. Generally such mass-produced bikes are not particularly collectable, but it’s in good condition and new bikes are expensive”.

What he bought: Wooden till/cash box.

Why? “I am immediately smitten, and, after a gentle haggle, the utterly charming shop owners take my €100 and tell me that they had it valued at €180 not long ago. They assure me I am getting a good deal. I believe them.”

James O’Halloran’s verdict: “This is a curiosity rather than a collectable. It has, effectively, no practical use or indeed no aesthetic or decorative attributes. Might be useful as prop in a Victorian soap-opera set in a cornershop.”

What she bought: A 1950s Underwood typewriter.

Where? A stall at the monthly Dublin Flea Market.

Why? “To my eye there was a huge neon-bulbed arrow pointing down at it from the sky that read ‘buy me’.”

James O’Halloran’s verdict: “A good example of early technology, but it is not particularly collectable. It does have a modicum of decorative appeal, but is more likely to be a dust collector. It too could be in demand for TV or movie sets, or indeed for communication in times of power outages.”

So, there is no clear winner. None of the treasure hunters have managed to bag a bargain, and they would be unlikely to get their money back – let alone make a profit – if these items were put up for auction.

But then, collecting isn’t usually about making money, and, regardless of the prices paid, such items often become prized possessions to their owners. It is also worth remembering that most collectables are only ever sold following house clearances after their owners have died. Few collectors live to see their own Antiques Roadshow moment – if there is one.

All of the treasure hunters could, almost certainly, have found the item they wanted online and checked the estimated value. And many collectors do. But that would mean forgoing the pleasure of browsing, the thrills and frustrations of the hunt itself, the interesting characters, the banter, the haggling, the knowledge acquired and the pleasure of falling for something unexpected or chancing upon a long-sought-after item.

As there is no winner, the editor has decided to split the €500 prize, and any funds realised from the resale of the items, equally between all five nominated charities. Series concluded