Finland happiest country in the world as Ireland ranks 14th

Nordic countries are happiest, with annual study also charting the decline of the US 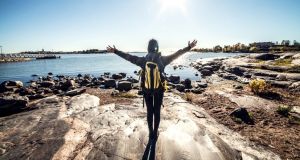 Happy are the people of the Nordic nations, happier, in fact, than anyone else in the world. And the overall happiness of a country is almost identical to the happiness of its immigrants. Those are the main conclusions of the World Happiness Report 2018. Finland is the happiest country in the world, it found, followed by Norway, Denmark, Iceland, Switzerland, the Netherlands, Canada, New Zealand, Sweden and Australia.

Though in a different order, this is the same top 10 as last year, when Norway was No. 1 and Finland was fifth.

Ireland is ranked 14th, The US 18th and the UK 19th. The study showed Ireland experienced an increase in “health-adjusted life exoectancy” of 4.1 years, going from a life expectancy of 67.4 years in 2000 to 71.5 years in 2015. The report also listed Ireland as the 11th most accepting country for migrants.

The UN report devotes a special chapter to why the US, once towards the top of happiness table, has slipped down the league despite having among the highest income per capita.

“America’s subjective wellbeing is being systematically undermined by three interrelated epidemic diseases, notably obesity, substance abuse (especially opioid addiction) and depression,” said Jeffrey Sachs, director of the Center for Sustainable Development at Columbia University in New York, and one of the report’s authors.

Despite African countries getting the worst happiness scores, one West African nation has bucked the trend. Togo came bottom in 2015 but was the biggest improver in the 2018 report, rising 18 places. Latvians and Bulgarians are also reporting higher levels of happiness.

Venezuela recorded the biggest fall in happiness, outstripping even Syria, although in absolute terms it remains a mid-ranking country. The report notes that Latin American countries generally scored more highly than their GDP per capita suggests, especially in contrast to fast-growing east Asian countries.

Latin America is renowned for corruption, high violence and crime rates, unequal distribution of income and widespread poverty, yet has consistently scored relatively highly in the happiness report. The authors attributed this to “the abundance of family warmth and other supportive social relationships frequently sidelined in favour of an emphasis on income measures in the development discourse”.

Meanwhile, the greatest human migration in history – the hundreds of millions of people who have moved from the Chinese countryside into cities – has not advanced happiness at all, the report found.

“Even seven-and-a-half years after migrating to urban areas, migrants from rural areas are on average less happy than they might have been had they stayed at home,” according to John Knight of the Oxford Chinese Economy Programme at the University of Oxford and one of the contributors to the report.

The report was produced by the United Nations Sustainable Development Solutions Network. It is based on Gallup International surveys conducted from 2015 to 2017. Explaining why one country is happier than another is a dicey business, but the report cites six significant factors: gross domestic product per capita, social support, life expectancy, freedom to make life choices, generosity and corruption levels.