Fianna Fáil TD elevated to minister of State by Haughey 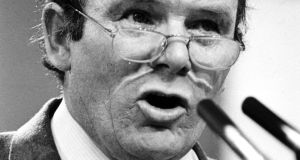 Denis Lyons, who has died aged 78, emerged into national politics in the 1980s as a supporter of Charles Haughey in the aftermath of the long Jack Lynch era in Cork.

Lynch, a former taoiseach, retired from politics in 1981, the year in which Lyons was first elected to the Dáil for Cork North Central. Haughey, who was Lynch’s successor as taoiseach, later made him minister of State for the marine and then in the department of tourism and transport.

His ministerial career ended with Haughey’s retirement and his replacement by Albert Reynolds in 1992.

Lyons came from a traditional Fianna Fáil route into local and then national politics. Born in Cork, his father, Denis, was from Kerry and active in Fianna Fáil, and his mother, Margaret, from Enniskean, Cork. He was a cousin of the Coffey brothers who were killed during the War of Independence in an incident near Enniskean.

He was educated at Sunday’s Well national school, the North Monastery CBS and the Crawford Municipal Technical Institute. He became involved in the GAA as a player and administrator at club and divisional level, playing in Gaelic Park, New York with a Blarney touring team.

He was an active trade unionist until he started his own sheetmetal business, opting for that career rather than taking up an offer of vocational teaching. He was also involved in the arts and was nominated to the national committee for European music year by the then Fine Gael taoiseach Dr Garret FitzGerald.

His first major political break came in July 1972, when he was co-opted to Cork County Council. He retained his seat in subsequent elections and, when elected to the Dáil, closed down his business to concentrate on politics. Vote-getter He soon showed himself to be a formidable vote-getter, retaining his seat in the two elections in 1982 and topping the poll in one of them. He was party spokesman on education and industry.

In 1986, he told the Dáil that his party would create “a positive environment for industrial expansion’’ if it was returned to power. In particular, he said, the party would restore confidence in the construction industry, which could create jobs more quickly than many other areas of activity.

When Fianna Fáil returned to power a year later, Haughey elevated him to the junior ministerial ranks. He was low-key but competent and handled himself well when put under pressure by the opposition in the Dáil.

He regularly highlighted the need to develop the tourism industry and provide jobs. In 1988, he appealed to the industry to “pare back to the greatest extent possible on your pricing’’.

Following his demotion to the backbenches in 1992, he lost his Dáil seat in the general election later that year and subsequently failed to get elected to the Seanad.

He is survived by his widow, Catherine, and six children.