Farmer and musician who kept Irish alive in Fermanagh 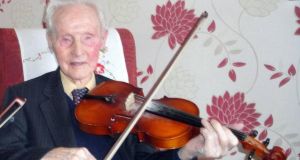 Paddy Flanagan, who has died in his 101st year, was the last known link with the Fermanagh Gaeltacht. In every way he was steeped in the traditions of his native west Fermanagh. As a skilled fiddler and accordion player, he was a custodian of its music.

Patrick (Paddy) Flanagan was born in the townland of Scribbagh in February 1913. Scribbagh is in the Cashel area, more than 20 miles west of Enniskillen. He was the youngest of five children to Michael Flanagan, a small farmer and road contractor, and his wife Bridget (née Duffy).

Both parents were Irish speakers. His maternal grandmother, Margaret Duffy, was particularly known for the richness of her Irish.

Both English and Irish were spoken in his home when he was a child. He said that, by three or four, he knew more Irish than he ever subsequently learnt. The nearest town, Kiltyclogher in Leitrim, two miles away, was a place where Irish was regularly heard on fair days.

His home area was one of the Gaeltachtaí stranded in the Northern state after partition. Irish was also spoken in Aghayaran in Tyrone, parts of the Sperrins, spanning the Tyrone-Derry border, the Glens of Antrim and Rathlin Island, and a chunk of south Armagh.

Gaeltacht decline
All these Gaeltachtaí went into catastrophic decline in the hostile political and social atmosphere of the new Northern state. Flanagan remembered his community ceasing to use Irish in the early 1920s.

Flanagan received his education at Cashel Primary School. Afterwards he worked on the family farm till, in his 20s, he moved to Garrison, also in west Fermanagh, and bought another farm.

As well as being a farmer he was a musician, who often played at house dances. He was one of those who kept the Fermanagh musical style alive through traditional music’s lean years in the 1940s and 1950s.

He played Gaelic football for teams in Fermanagh and Leitrim till he was 45. In times when the registration rules were more lax, he was known to play a match in the afternoon, then cycle to another parish to play another match on another team – sometimes under another name.

Flanagan attributed his longevity to being a lifelong non-smoker and teetotaller. He decided to stop driving at 99, however, due to advancing age.