Emma Donoghue: 'You don’t feel like a queen on the red carpet, you feel a bit of a loser'

The author of Room discusses the Oscars, writing children’s book and her new novel The Wonder on the Róisín Meets podcast 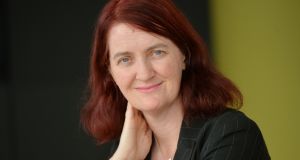 “You’re on the red carpet and there are way more famous people in front of you and behind you, and the photographer is looking over your shoulder and they’re chanting, ‘Leo! Leo!’ So you don’t feel like queen of the world, you actually feel like a bit of a loser” Photograph: Alan Betson

“I enjoyed the publicity for Room the film a lot, but the film world is very different from the book world and it’s really not my world. The partying is relentless,” says Irish writer Emma Donoghue about the publicity around the Oscar winning film adaptation of her book, Room.

“People keep saying, ‘oh your life must have changed so much!’ but you know I’ve been writing books since I was 19, it doesn’t change very much at all,” she told Róisín Ingle, presenter of the Róisín Meets podcast.

While she now has quite a few ‘awards ceremony’ dresses in her wardrobe, her new-found Hollywood fame hasn’t gone to her head.

“You’re on the red carpet and there are way more famous people in front of you and behind you, and the photographer is looking over your shoulder and they’re chanting, ‘Leo! Leo!’ So you don’t feel like queen of the world, you actually feel like a bit of a loser,” she said.

The author, who also wrote the screenplay for the film, said she and director Lenny Abrahamson had joked on set that lead actress Brie Larson could win an Oscar. They never thought it would actually happen for a low budget, Irish-Canadian production, but it did.

While the publicity surrounding Room was, “endless”, Donoghue said there are moments from it that will stay with her.

“Cate Blanchett not only greeted me voluntarily and spontaneously but she rubbed my arm. Now when I re-watch Lord of the Rings with my son the skin of my arm burns with elfish flame,” she joked.

Donoghue was on the podcast to speak about her new book, The Wonder, which tells the story of an English nurse brought to a small Irish village to observe what appears to be a miracle – a girl said to have survived without food for months.

Parts of her relationship with her own daughter can, she said, be found in the interactions between the nurse and the girl in The Wonder, and her children are often sources of inspiration for her stories.

“I seem parasitically fond of taking ideas from my children. Every time they say a word to me I’ll whip the phone out and jot it down,” she said.

There are no plans to make The Wonder into a film as yet, but Donoghue said there is only one person who would write that screenplay.

“I would love it to be a film and no one is going to write it but me.”

To listen to Emma talk about life after Room, her latest novel The Wonder, Cate Blanchett rubbing her arm, stealing ideas from her children, and more, go to Soundcloud, iTunes, Stitcher or irishtimes.com.

The Wonder, published by Penguin, is out now.