A former museum director, who was too afraid for his life to return to Sudan, describes the ‘inhuman situation’ of the direct provision system 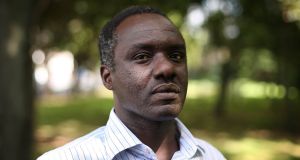 When Haider Altegani worked as an archaeological inspector on excavations, digs in the vast Saharan desert could last up to four months. The team of archaeologists would find accommodation in nearby villages and rise at sunrise each day to travel deep into the desert to continue their search for prehistoric artefacts. If was no accommodation was available, the team would camp in the desert for months at a time.

Altegani, who was born in Darfur and studied archaeology at university, says he was always interested by how things work. “I have that idea of trying to piece things together. Whenever an event happens, you have to look back at how it started – the history behind the scenes.”

After working on a number of digs, he became director at a history museum in Omdurman, the largest city in Sudan. In 2006 he was offered the job of establishing a new history museum in the city of Nyala in southern Darfur. The aim of the museum was to build a cultural solution to the conflict in the Darfur region. According to the UN, the ethnic conflict between non-Arabs in Darfur and Arab militias has killed hundreds of thousands and displaced nearly two million people since 2003.

“The idea of the project was to build a cultural organisation which covered archaeological art, folklore, history and traditions in Darfur. We wanted the museum to be some sort of cultural solution to the Darfur conflict.”

In 2007 he was invited to take part in a conference and training programme at the British Museum in London. He spent three months travelling around cities in the the UK and Ireland, visiting museums. In Dublin he received a call from his wife and parents, warning him that representatives from the government had come to the museum and his home asking questions about his whereabouts.

Altegani’s family – as members of the anti-government Justice and Equality Movement, which is involved in the conflict in Darfur – knew of the dangers he faced if he returned home. “They told me not to come back. If I did, they would catch me, torture me and then kill me.”

In a panic, he contacted representatives of the Justice and Equality Movement and asked for advice. They recommended he apply for political asylum in Ireland.

Awaiting refugee status
He was brought to the Balseskin direct provision centre in Co Dublin before being transferred to a centre in Ennis, Co Clare. He would spend seven years moving from centre to centre across Ireland waiting for his refugee status. After a period in Co Clare, he was transferred to Kerry, followed by a move to Cork. He also spent time in the direct provision centre near Foynes, Co Limerick, before completing his time in Limerick city. He says he was transferred because of his complaints about the conditions and food in the centres and his calls for recognition of his human rights.

“It was an inhuman situation. If you are in a prison cell, you know you have committed a crime, so you should be patient because you’ve done something wrong. But in my situation I hadn’t committed any type of crime but ended up in an open prison. I kept asking for news on my status and the answer was always ‘Your case is under consideration, just wait’. It would drive anybody mad.”

In 2010 he lost contact with his wife, who was still in Darfur. “We stopped contact for a number of reasons. When you get angry and frustrated, it’s difficult to sort out problems. When you’re in direct provision, it’s difficult to follow what’s going on in the outside world.”

In 2014 he was informed that his application for asylum had been accepted and he could leave direct provision. He contacted his wife, who had fled Darfur and was now living in the UK, and applied for her to join him in Ireland. However, despite the sense of relief at leaving the asylum process, he also felt angry.

“I was angry. It came late after I had already lost seven years of my life, so I wasn’t happy.”

Determined to find work in his field of expertise, Altegani applied for an internship with the National Museum of Ireland as soon as he moved to Dublin. While in direct provision he was involved with the Co Clare archaeological museum and also did an unpaid training course at the Hunt Museum in Limerick. Unable to find museum work, he now works as a freelance interpreter and teaches evening classes in Arabic.

Studying the culture
He has worked hard to integrate into Irish society by studying the culture, history and language. “I built this understanding and all that made me feel like I was part of the country. But more recently, there is something I’ve experienced called discrimination or racism.”

He recalls the time a group of men spat at him from their car, and an incident when the driver of a passing car pulled in and threw a bucket of water over his head. “Racism is everywhere, it’s even in Sudan. But there are different types of racism; there is internal, unseen racism and then there’s racism that is seen and clear.”

He is still focused on building a new life in Ireland but struggles with the barriers he has encountered along the way. “If you’re searching for a job that satisfies you and matches your experience, education and skills, and you try your best but can’t get it, it’s frustrating. When you lose seven years of your life without committing a crime, it’s frustrating. And when you want to continue your studies but there’s no organisation that can support you and you have to start again, it’s frustrating.”

“I have very good Irish friends and I feel a part of their world and their discussions. But at certain times, you’re always reminded that you are a second-class citizen, you are a foreigner and you are not part of this country.”