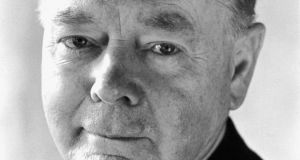 Dr Percival McCormack: “I have found my life’s work in space medicine – fortuitously. To those who would seriously desire to enter this field, all I can say is: try, try and try again. And in the meantime, maximise your medical and scientific skills.” Photograph: Paddy Whelan

Percy McCormack, who has died aged 85 in Illinois, USA, was a trailblazing visionary whose disciplines combined medicine and engineering.

A man for the modern world, he contributed to USA and European space flight programmes. The Sunday Tribune described him as “the doctor with the most colourful career since leaving Ireland” (December 28th, 1997).

He began his research career at Trinity College Dublin as a physicist with an interest in fluids, which would lead to important work on the design of the rocket engines for the Apollo moon landings.

Enthralled by the promise of space exploration, he changed his career path to add a medical qualification and went on to the US navy and the National Aeronautics and Space Administration – becoming chief of operational medicine at Nasa.

In 2001, McCormack became professor of bio-engineering at the University of Illinois at Chicago.

He also held visiting professorships including the University of Ulster, Jordanstown; Francisco Marroquin University, Guatemala; and at his alma mater, Trinity College Dublin.

Percival Davis McCormack was the oldest of three children of Thomas McCormack, a bank manager.

His mother was Marie Davis, a shop assistant. The family grew up in Dublin and Limerick. At national school in Sutton, Co Dublin, his love of mathematics was encouraged. After Villiers school in Limerick, he enrolled in Trinity College Dublin, qualifying first as a scientist, then in medicine.

“There was an important textbook that I needed and it cost 17 shillings and six pence which was quite a bit of money. I pestered my grandmother Davis until she gave me the money,” he later told his family.

His uncle, a veterinary surgeon in Co Longford, encouraged the young man to study and helped with his university fees until he won scholarships. McCormack was a Trinity Scholar in 1950, and in 1991 would be a candidate for the college provostship – it went to Thomas Mitchell.

McCormack was also briefly an Irish candidate for the position of Europe’s first astronaut, and a member of Telifís Éireann’s commentary team for the first moon landing.

He met his future wife, Dorothy Lee from Bandon, Co Cork, at a Church of Ireland parish dance at Rathfarnham, Co Dublin.

Percy McCormack’s thirst for knowledge brought his young family to England, South Africa, and back and forth to Dublin and Cork. He eventually became a US citizen. The family lived variously in California, Utah, Maryland, Washington DC and Illinois.

Rockets had always interested him as a child. Wearing his medical hat, he became a US naval surgeon.

His engineering skills got him involved in solving problems with the Apollo landing, and won him a congressional citation.

Medical care in zero gravity and re-adaptation was a challenge and he enjoyed this. He also helped set up a link after the Armenian earthquake in 1989 to four US medical centres.

In his own words: “I have found my life’s work in space medicine – fortuitously. To those who would seriously desire to enter this field, all I can say is: try, try and try again. And in the meantime, maximise your medical and scientific skills.”

Percy McCormack is survived by his widow Dorothy and sons Percy, David, Howard, Russell and Hugh, his brother John and his sister Marion.

Churchtown classic with growth potential for €775,000
6

Victorian classic sums it up on elegant Rathgar square for €1.35m
Real news has value SUBSCRIBE