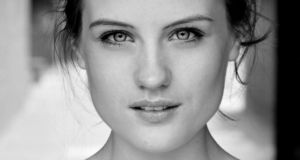 Danika McGuigan had an extensive career in both television and film.

Danika McGuigan, the accomplished stage and screen actor and only daughter of former boxing champion Barry McGuigan and his wife Sandra has died following a short illness.

Called Nika by friends and family, McGuigan was probably best known as Danielle, the co-star of the RTÉ series Can’t Cope, Won’t Cope about two 20-somethings from Mallow, Co Cork, trying to make their way in Dublin.

In her short life, she had an extensive career in both television and film, appearing opposite Rooney Mara in Jim Sheridan’s screen adaptation of Sebastian Barry’s novel The Secret Scripture, in Philomena with Judi Dench and in Mammal with Rachel Griffiths.

She had recently finished filming Wildfire, a psychological drama about how two sisters deal with the trauma and grief following their mother’s mysterious death. Director Cathy Brady who was also a close friend of Nika’s said: “The film was written for Nika. I workshopped it with her and her co-star, Nora-Jane Noone, and we spend five years crafting it. As an actress, Nika had a remarkable alchemy of strength and courage with the ability to be vulnerable and to be seen to be vulnerable.”

A vivacious and funny young woman, Nika McGuigan worked between Dublin and London, and lived in the British capital since 2013. Her close friends described her as an exciting person to be around displaying natural “coolness” and a boisterous sensitivity. “She would come bounding along in her buffalo shoes and crunchy top knot with a big smile on her face. Yet she saw things incredibly deeply and honestly. And savoured and respected life. When she let you into her life, she was incredibly loyal and gave you much love,” said one of her closest friends.

Danika McGuigan was born in Newry, Co Down, the second of four children (her brothers are Blain, Jake and Shane) and only daughter to former boxing champion Barry McGuigan and his wife, Sandra. The family lived in Clones, Co Monaghan for the first few years of her life and then moved to England, settling in Kent near Whitstable. She went to school at St Edmunds, Canterbury.

At the age of 11, she was diagnosed with acute lymphoid leukaemia and had chemotherapy for six months, before getting the all clear in 1999.

Following Danika’s illness her father became a patron of Cancer and Leukaemia in Childhood and took part in many charity fundraising events. Speaking in 2005 about his daughter’s childhood illness, he said: “It was like our roles were reversed: this time it was my little girl who was the fighter.” He also said his daughter had a wonderful outlook on life. “The word ‘dynamo’ doesn’t do her justice. With Danika, the glass is never half empty and never half full. It’s completely full. In fact, it’s probably spilling over.”

Her older brother, Blain, said that his sister had a wild imagination and a fantastic sense of humour. And that even when she was ill she did comic sketches. In fact, when she was having chemotherapy at the age of 11 in St Bartholomew’s Hospital, London, the actor Matt Lucas, from the television series Little Britain, came into the hospital to perform a sketch with her.

From the ages of 13 to 17, Danika was a boarder at Benenden School, Kent, where her talent for dancing, art and drama was spotted and nurtured. Following an appearance in a show at the Palladium in London, McGuigan went on a two-week course to the Gaiety School of Acting in Dublin, after which she was accepted into the two-year acting course before finishing her A levels. She graduated from the Gaiety School of Acting in 2006. She later returned to acting school, graduating from the Factory Screen Acting Programme (now Bow Street) in Dublin in 2013.

Debra Caron, former director of drama at Benenden School, said: “In my 23 years at Benenden, I can honestly say that there are very few who I would consider to have the right mix of talent, determination and love of their art to succeed beyond the first couple of years – Nika was definitely one of those few. Nika could, and would, play anything. She took risks because she wanted to be better. It was no surprise when she was offered a place at drama school a year early – an almost unheard of occurrence – or that she went on to have a very worthy body of work.”

Game of Thrones actor John Bradley, who played Samwell Tarly in the HBO fantasy television series, said he was “lucky enough” to work with McGuigan in the 2015 film Traders and said she was “one of the kindest, funniest and most talented people I’ve ever met”.

Nika was diagnosed with advanced stage colon cancer in June and her illness progressed rapidly. Following her death, her family is keen to highlight the rise in colon cancer in young people.

Nika was represented by Karl Hayden at The Agency in Dublin, who said: “Nika was an incredible and versatile talent who lit up our screens with her undeniable presence, sensitivity and superb comic timing.”

Has fairytale Kerry castle found a buyer at last?
7

Yes, having ‘just’ the one child can make for a wonderful family dynamic
10