Danielle Ryan reveals the secret to her success

CEO of publishing and perfume house Roads, and Ryan dynasty heiress, Ryan has based her expanding operation in Dublin 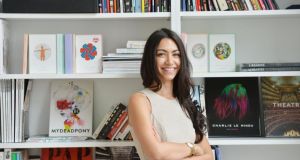 Between the Viking Splash chaos, the harried commuters and the throngs of students, all of life is here on Dublin’s Dame Street. Few would be aware of the tasteful oasis of calm just a few floors up; an airy and expansive loft-style office with generous splashes of detail and colour. It’s where Danielle Ryan, CEO of publishing and perfume house Roads, and Ryan dynasty heiress, has based her expanding operation.

If you’re of the Gore Vidal school of thought – the sort who wilts in the face of another’s success and effortless glide through life – Danielle Ryan’s seemingly charmed life may well make you die a little inside. A wife and mother-of-two, Ryan has propelled Roads’ various strands (perfume, publishing and film) to ever-dizzying heights since the company’s inception two years ago. A graduate of London’s RADA academy, Ryan moved home to Dublin from London and was involved in starting the Lir Academy, the theatre school in Dublin’s Grand Canal Docks. On top of all that, there is charity work on behalf of Unicef and the UN in Sri Lanka, where Ryan’s mother Tess de Kretser was born ( her parents met when she was an air hostess and he a pilot of Air Lanka).

Certainly, heiresses and their ‘branding’ exercises are nothing new in the world. But there’s something of a perfect storm about Ryan’s Roads venture. Ryan is a dyed-in-the-wool aesthete. Perfume, books and film may seem like incongruous enough strands, but already, Roads fragrance have proved a big success, retailing in Selfridges in the UK and Barneys in the US. The scents are also on sale in the Middle East, Australia, New Zealand, Morocco and Russia. These are not your common-or-garden perfumes, either: White Noise is based on ‘technology’ while Harmattan is based on ‘a wind that crosses that Sahara’. Sounds like a triumph of style over substance, but the turnover of the fragrance division in its first year has been estimated at €2m.

This month, attention has turned to Roads Entertainment now that the company has announced production of Dubliner Ciaran Foy’s new thriller, The Shee. The film will be a co-production with Hollywood’s horror powerhouse, Blumhouse Productions. Producing on behalf of Roads is new CEO Alan Maher, formerly a senior executive at the Irish Film Board. It’s not Ryan’s first foray into film financing: already, she funded the acclaimed documentary, Dreams Of A Life.

I’ve never thought, ‘let’s find a gap in the market’,” she explains. “In the beginning I looked at the kind of things I wanted to do. We’ve fallen into the documentary sphere because I prefer documentaries to features. What people like about us is that we’re not likely to change their work or tell them that it’s too commercial. I mean, we’re not making The Hangover.”

Still, this is no-one’s idea of a mere hobby. “Oh, I have to make money,” Ryan says emphatically. “We get funders on boards, but if needs be, I’ve looked at a project in development that needed funding and said, ‘well, let’s just bridge it for now/. I don’t do it often, but if something needs the freedom to develop, you have to step up and be passionate about the work that you do.”

Never let it be said that Ryan doesn’t know how to surround herself with the right people; it’s the secret to the company’s success, she notes.

“It’s all about collaboration,” she explains. “My team members are smarter than me in whatever position they have and I trust their opinions 100%. It’s quite a nice structure in this office and people bring ideas to the table all the time.”

Surrounding oneself with smart people is one thing, but Ryan herself is no slouch in that department either; a woman who is hard to keep up with in every sense of the word.

“I was gone for July pretty much, in Paris, London, Munich, Milan, New York,” she explains. “Next up is the Toronto Film Festival, Fragranze (the perfume fair), Scoop (fashion shows) in London, and project meetings to meet artists. I don’t mind the conversations, just the airports. No more airports!” she cries, mock-theatrically. (In case you’re wondering, she does indeed fly Ryanair).

How did her upbringing – mainly in Dublin but also partly in Sri Lanka and Nigeria – inform her work ethic?

“There was always a sense of work ethic and attention to details,” she muses. “By osmosis, there was a thinking that anything was possible, of course. My family would have been ‘you can seriously fail here, but that’s no problem. There’s no problem in failing’.

I tell her that, with so many endeavours already ticked off in just 31 years, Danielle is not the sort of person who’s likely to die wondering.

“Oh god, you don’t want to regret anything,” she says, wide-eyed. “You just kind of get on and do it and routine yourself. I leave work at the same time and pick the kids up.”

Does she get time to enjoy the milestone moments in her children’s lives? “Oh yeah!” she smiles. “First day of school this week! Of course, I was the one crying and they’re like, ‘ugh, embarrassing’.”

A charmed life, certainly.. but not one without its own tragic moments. Danielle is better known in Ireland as one of the grand-daughters of Tony Ryan, a Gatsby-style figure who rose to dizzying success, building up a little airline called Ryanair as well as aviation leasing business Guinness Peat Aviation.

Quite apart from the money and infamy associated with the Ryan family dynasty, would she describe her upbringing as typically, normally Irish? Has she ever, for instance, had a Tayto sambo? She erupts into peals of laughter.

“Course, my god! What are you talking about?” she hoots. “It’s what got me through college and school!

“My childhood was normal in many ways and not normal in many ways,”” she adds. “I know what things were unusual for me growing up, and what other kids in my class didn’t have. We were grounded and stuff, and we weren’t allowed to become arrogant or have the wrong attitude. If we lost perspective we were in so much trouble. I appreciate all of that now. It makes life interesting because I’m not afraid of going to talk to the heads of big companies. I don’t get as easily intimidated somehow.”

When Ryan went firstly to Our Lady’s boarding school in Rathnew, then to NUI Maynooth to study anthropology, and later to RADA, no-one was any the wiser of her provenance.

“I had to work and do my weekend and evening jobs and live with a bunch of people in a big house,” she recalls. “I worked in bookshops mainly, but there were a few embarrassing promotional jobs too.”

While a few acting jobs surfaced, primarily in Fair City, Casualty and The Tudors, the RADA training has stood Ryan in good stead and it’s certainly not an endeavor she has turned her back on.

“It’s funny… I’m quite a shy person and a lot of actors I trained with are shy but can do (the confidence thing) when they need to,” she says. “That whole training process was relevant to everything I do, from looking at body language in meetings to knowing if someone might be lying.”

A glittering on-camera career beckoned until tragedy struck. When Ryan was 23, her grandfather Tony died in his palace in Kildare, Lyons Demesne, aged 71. Mere months later, her father Cathal died of pancreatic cancer, aged 48. The double blow brought her back to Ireland. Ryan sold the expansive Celbridge manor (Stacumny House) she inherited from her father, and now lives with her childhood sweetheart and husband barrister Richard Bourke (nephew of former president Mary Robinson) and her children Carla (5) and Ethan (3) on Fitzwilliam Square.

While inheriting a prime slice of a €250m fortune at the age of 26 would have derailed many a person, the scenario only served to galvanize Ryan’s budding business acumen.

“It was less about frittering it away and more about figuring out a lot of clean investments,” she reflects. There was a lot of learning that had to be done very quickly, but I wasn’t totally green with it either.”

What the future holds for Ryan, it’s hard to predict. There are clearly many dreams left to fulfil, and with almost a dozen film projects in varying stages of development, it’s not likely there wlll be a dull moment anytime soon. Acclaimed writer Mark O’Halloran and talented director Andrew Legge are in Roads Entertainment’s crosshairs. Danielle Ryan certainly has a knack for surrounding herself with the talented and the visionary, but there’s every chance the artistic community will be thrilled to have her in their own corners soon.