Charismatic geologist who breathed life into the past 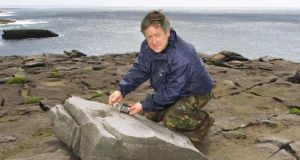 Mike Williams, who has died aged 67, was a charismatic geology professor whose enthusiasm took him a long way from dry tomes and dusty lecture halls.

He was happiest climbing up cliff faces and exploring deserted beaches. A Welshman who settled on Ireland’s Atlantic coast, his sense of wonder at the natural world was infectious.

Through his teaching at NUI Galway, and the fieldwork he undertook, Mike Williams showed that the process of change and renewal in the earth’s crust was constant.

On finding a 7,500-year-old drowned forest on the northern shores of Galway Bay, its ancient tree trunks exposed by storms, he observed a continuum of change. The forest died because the water had cooled, the sea level had risen and the cycle of change went on.

Williams taught his students to cross boundaries into other disciplines. Specialism was important, he insisted, but so too were curiosity and perspective.

The effects of the Lisbon earthquake in 1755 had been felt in the Corrib, when parts of the Spanish Arch were knocked away, he noted. After that, when major weather events occurred, the Irish media looked to the “tsunami professor” Mike Williams for comment.

By observing change measured in geological time, he was seen as challenging the “received wisdom” that climate change, as we know it today, is caused by man’s recent behaviour over a much shorter timescale, and thus could be reversed.

This led some to accuse him of being a “climate change denier”, but for others such accusations were a measure of how polarised that debate had become.

Born in Aberystwyth on the Welsh coast, David Michael Williams claimed his best subject at school was rugby, though his parents were both university folk.

He studied geology at Cardiff University. On graduating, he joined the Cardiff Arctic Norway expedition to research pre-Cambrian sediments in Lapland, but the tectonic structure he intended to study turned out not to exist. Undaunted he pressed on with his doctorate.

After an early marriage broke up, separating him from three young children, he moved to Ireland to become a lecturer in what is now NUI Galway. There he met his wife-to-be, Margaret Geraghty. They married in a registry office in 1979 while watching a rugby match on TV. Together they had four children.

His colleague Tiernan Henry put it thus: “Mike could read and talk a landscape back into being and he could hold multiple eras of history, geology and geography in plain sight all at the same time.”

At his retirement as professor of earth and ocean sciences in Galway in 2012, Williams noted that his published research had attracted numerous scathing comments from all over the world – “and that’s just the way I like it!”, he added.

Mike Williams died of cancer in a bed that, like much of the furniture in the family home, he had made himself. Among his other pastimes were playing the violin, travel, writing poetry and baking bread. His body was donated for medical research.

He is survived by his widow, Margaret, and by his mother, Edeila (Del), his children, Rebecca (Gilbert), Daniel, Tom, Sian, Gareth, Gwilym and Meg, and his brothers Martin and Richard.

The Happy Pear: this cottage pie is like a belly hug