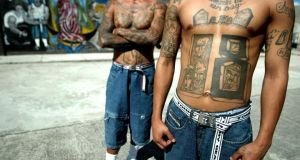 Members of the Mara 18 gang show their tattoos in the National Penitentiary in Tamara, near the Honduran capital, Tegucigalpa. Photograph: Elmer Martinez/AFP/Getty Images 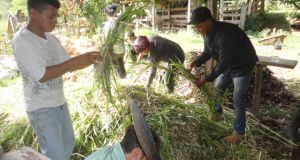 It’s hard to overestimate the level of violence and instability in Honduras. Years of gang violence and drug wars have earned this Central American state the title of most dangerous country in the world outside of a conflict zone. A total of 6,239 homicides in 2010 alone earned it this grim honour, according to figures from the UN Office on Drugs and Crime (UNODC). This puts Honduras at an intentional homicide rate of 90.4 people per 100,000. The rate in Mexico is 21.4. Ireland’s rate is 1.2. In its most dangerous city, San Pedro Sula, the murder rate of 180 homicides per 100,000 recently overtook Mexico’s notorious Ciudad Juárez.

Given its location between the Caribbean Sea to the west and the Pacific Ocean to the east, it should be a tourist hotspot, but it’s not. The country, with a population of 7.6 million, is bordered by Nicaragua, El Salvador and Guatemala, putting it firmly in the centre of a major drug route. According to the US State Department, 80 per cent of the cocaine that ends up in the US passes through Honduras, and that level of transport requires organisation. Rival gangs have come to provide this, dominating the country at local and national levels.

Known as Maras, the gangs control the drug market and local barrios (neighbourhoods) in Honduras. The two largest gangs are Mara Salvatrucha and Calle 18. Both gangs are said to have originated in the US, specifically Los Angeles, and are now organised transnationally, with Maras in all of the countries neighbouring Honduras as well as up to 42 of the US states.

For Irish people, one of the more high-profile Honduran murders by a gang was that of the teenage brother of Stoke City footballer Wilson Palacios, who was kidnapped from his family home in 2007. Despite the Premiership player paying the $125,000 ransom demanded by Calle 18, his brother’s body was found two years later following confessions by gang members. Young people are increasingly the victims of the gangs, either for defying them, for becoming targets of rival gangs or simply for being in the wrong place at the wrong time.

Tattoos are a major part of gang culture in Honduras, both to identify gang members and to prevent them leaving or hiding their membership. The gangs are said to be recruiting new members constantly, particularly among the young, and leaving or refusing to join is reportedly almost impossible. Membership does come with perceived benefits, which, although criminal, are attractive to young people with few other options. They achieve status in their communities, protection for their families, profit from criminal activity and a possible route out of poverty.

It is against this backdrop that Kenco, the coffee producer, has set up coffeevsgangs.com in Honduras. It’s an ambitious project, claiming to be a route away from gang membership. It has taken 20 young people, selected by local NGOs, and enrolled them in a year-long training course to give them the skills to work in the coffee industry.

It’s easy to be cynical about an international coffee conglomerate setting up a training course in a country that it relies on to continue producing coffee, but it seems to represent an opportunity that is not available to most young people.

Honduras is one of the top coffee producers in Central America and the seventh-largest in the world, but profits don’t always trickle down to the local level. In a country with low rates of land ownership, dreams of moving from the barrios and running a coffee farm are hard to realise.

The course recruits tell typical stories. There’s Sara, a 22-year-old single mother whose partner left for the US and is no longer in contact. Or 16-year-old James, whose parents both died before he was 10 and who now lives with his grandparents. Nineteen-year-old Roberto lives in a community with a high gang presence and has been arrested in the past. Mario, 16, tried to take the US route, but was deported back to Honduras. Ana is 21; she was four months old when her parents left her behind to go and find work in the US. She lives with her grandparents.

The 15 other recruits tell similar tales of hard lives endured.

The course is taking place on a coffee farm in rural Honduras, where the recruits live and study together, learning modern farming techniques, agricultural science and business development. According to project director Blanca Meijas: “We want to reach out to young people who are at risk of falling into a gang . . . Help them develop a business plan, have their own company. We want to give them a wider perspective on their own life.”

It’s hard to quantify how many will go the distance. The pressures from their own communities to give up and return to the barrio and the gangs will be strong, and the challenge of keeping up with course work in maths, English and financial management, alongside the physical farm work required, may break some participants.

Aidan Leavy, an inclusion specialist with Plan International, sees the course as a good start, although small-scale in the context of Honduras, but would be critical if it didn’t follow up the year with a structured next step for the participants. Leavy lived in Honduras for four years, working as a local development planning adviser with the Mayan Chorti tribe. It’s clear that the country has left a big impression on him and, despite the instability and violence he witnessed in his time there, he has strong feelings for a country that he says is one of the most beautiful he has seen.

Ultimately, it was the violence that persuaded him to leave. Having been held up at gunpoint twice in the same week, he realised that it was time to move on. “The instability makes it extremely difficult for people,” he says. “The options for young people are very limited . . . They can either join a gang, try and get work in the maquiladoras, or clothing sweatshops, where workers are treated very poorly, or join the coyote route, the migrant route north to the US. The risk is huge for people taking this option, particularly for women. The success rate is also very low.”

Annmarie Collins, a graduate of the one-year educational access programme for people from disadvantaged backgrounds in Trinity College Dublin, is adamant that programmes that try to lift people out of disadvantage are crucial. One year of opportunity can make a huge difference to how a life turns out, she says. Now studying health sciences at Trinity, she spent last summer in Mexico working with the children of Honduran and other migrants who are attempting to reach the US.

“The parents would be out all day, trying to get money I guess, and we would work with the children, occupy them through the day,” she says. “It was a great experience and really opened my eyes to the challenges people face, that our lives here aren’t that difficult in comparison.”

Annmarie is an Irish Traveller and recalls how her own community turned away from her when she sought out a third-level education. “It wasn’t seen as something that a Traveller girl should do. I was seen to be turning my back on my community, and that was very hard for me,” she says.

Ambitious and extremely capable, she is already planning to build on her experience in Mexico. “I’m exploring ways to set up something more formal between Ireland and other countries experiencing disadvantage,” she says. “I want people to recognise the great supports we have here, what we can achieve with them if we put our mind to it.

“I wouldn’t have the confidence to do any of this if it wasn’t for the one-year access course. It’s a fantastic opportunity. They support you so well and help you to push yourself. I was terrified at first, the idea of studying at Trinity. It was also really hard. I had to ask myself why I was bothering; I had easier options. But the staff believed in me and helped me believe in myself. This is all that most people need, and I guess that’s what the Kenco course is trying to do.”

The Irish Times will be documenting the work of the coffee vs gangs project for the next six months. Gary Quinn will spend a week on the farm in Honduras in January 2015. You can follow the project at irishtimes.com/coffeevsgangs