Can’t get into your local CoderDojo? You could always set one up

The volunteer-run classes where children learn to programme websites or build robots are increasingly popular. But more tech heads are needed to run them 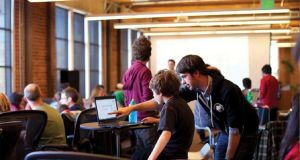 The first CoderDojo was launched in 2011 in Cork. Four years later there are 675 dojos in 57 countries, 158 in Ireland

In June 2011, the first CoderDojo was launched in the National Software Centre in Cork. Four years later and there are 675 “dojos” in 57 countries around the world, 158 in Ireland. All are run by volunteers, people who have a passion for technology and want to inspire the next generation to code.

The demand for skilled computer programmers is ever increasing in the modern economy, and the interest of kids to learn to code is high. The traditional school environment can’t always cater for this. In fact, the European Commission warned that 900,000 IT jobs will need to be filled by 2020 across the European Union.

“I learned about CoderDojo through ChangeX and in seconds decided that I wanted to contribute. Ballyvaughan is a village that relies on community spirit and volunteerism. It’s so important for members of the community to be driving these types of changes”.

He now regularly brings eight kids together in the Burren College of Art, most of them under the age of 10, all from different backgrounds. “Some of the kids wouldn’t even have a computer at home,” he says.

CoderDojo gives children the opportunity to learn how to develop websites, apps, games and more, in a social, collaborative and fun learning environment.

“Dojos usually start with basic HTML and CSS, languages you need to build a basic website,“ according to Giustina Mizzoni from the CoderDojo Foundation.

“We regularly have kids who move onto advanced languages, some who have developed advanced mobile apps for iOS, and others who have hacked hardware and built robots.”

Every “dojo” is different, depending on the mentors and also on what the kids would like to learn. On the Coderdojo website mentors can find free information, handouts and inspiration from other groups on how to successfully run classes.

Ryan has been concentrating on HTML and CSS basics for his group of young coders so far: “It was so great to see how on the first day they just had a ‘Hi I’m Joe, and I like boats’ on their created websites, and a few weeks later there are frogs jumping around the screen. I gained a lot of insights and respect for the imagination of these kids; and their parents are blown away by the fact their kids can build a website.”

For Colin O’Brien – who has been a CoderDojo champion in Tralee, Co Kerry for three years – CoderDojo is also about giving children a realistic view of what coding and working as a programmer means.

“Many children have their main point of contact with computers through playing computer games and think working as a game developer mainly involves playing games. Something like CoderDojo would have helped me a lot at the age of 12 or 13 to better understand what kind of technology I’m actually interested in.”

With the help of around 12 volunteers O’Brien brings together 90 students every week over 10 weeks before and after Christmas. They split the kids into three separate groups depending on the level of the young coders. “It’s all like an open coding group. We only facilitate to help the kids to programme what they are interested in.”

What O’Brien enjoys most, is to see the kids engaging with each other in this new environment. “Some of the kids that were quiet in the beginning came out of their shells a bit, and a few of the kids that felt isolated because of what they were interested in have some more friends now,” he says.

But it’s not only the kids who can be shy in the beginning; the mentors also gain confidence in providing guidance and taking responsibility in helping these children.

O’Brien finds it very difficult to find volunteers to help run the classes, people who are willing to give some of their time, have some computer skills and are also happy to speak in front of people and work with children. “We could allow more than 90 kids attend our dojo if we just had more mentors,” O’Brien explains.

And Joe Ryan would love to welcome more girls to his Dojo in Ballyvaughan. “Right now it’s only boys.” When he once asked a mother why she just brought her son to the class and not her daughter, the answer was “Computers are not for girls”. That’s a common misperception that CoderDojo is helping overcome to ensure that girls have the same opportunities as boys in their future careers.

“Globally the average number of girls participating in dojos is 30 per cent; this figure is higher then the industry average of women in programming, but our aim is for dojos to become 50:50,” Giustina Mizzoni points out. She encourages more female developers to get involved in CoderDojo by setting up new groups or helping as mentors. “We’ve found that dojos with female volunteer mentors not only attract, but retain higher percentages of young girls.”

Giustina just started her first Dojo herself in the Dublin co-working space, Dogpatch Labs in the CHQ Building where the CoderDojo Foundation is based. It took her nearly a year to build up and start the club. “Just pick a date and do it,” Giustina advises anyone who is thinking about starting a Dojo. “Not everything will be perfect for the first couple of weeks; it might be a little hectic, a little mad, but it will all fall into place.” 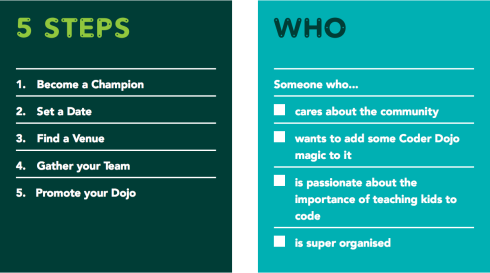 What’s the story with dining out under new Covid-19 regulations?
4

Tanya Sweeney: You get a lot of brain space back when you stop hating your body
10