Obituary Thom Moore: His music was much sought after by artists as diverse as Mary Black, Maura O’Connell, Rita Connolly, Clannad and The Dubliners 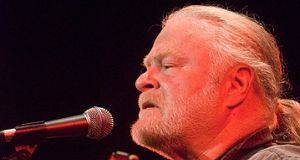 Thom Moore’s songwriting skills were exceptional: ‘Carolina Rua’, ‘Saw You Running’, ‘The Navigator’ and ‘The Scholar’ were calling cards

Singer/songwriter Thom Moore’s contribution to the musical tapestry of this country was substantial. Born in Los Angeles in 1943, he was the third son of Bruce Alden Moore, an engineer, and Viola Anne Hayes. His mother, who was by nature a romantic, and a reader of Isak Dinesen and Lawrence Durrell, persuaded her husband to take employment in East Africa and the Middle East. As a result, Thom spent his formative years in Ethiopia (1950-53) and Lebanon (1955-61).

His innate musicality and spirit of adventure brought him to live in Sligo in 1971, with his wife Kathy and with Rick Epping and Sandi Miller, Californians all. There, they formed Pumpkinhead, a band which, with great prescience, effortlessly crossed Irish, American, English and Scottish musical genres. Thom subsequently formed Midnight Well with Janie Cribbs, Mairtin O’Connor and Gerry O’Beirne and both bands had a seminal influence on the nascent Irish folk scene.

Thom’s songwriting skills were exceptional: Carolina Rua, Saw You Running, The Navigator and The Scholar were calling cards of a musician who could effortlessly marry beautiful melody lines with sublime lyrical content. His music was much sought after by artists as diverse as Mary Black, Maura O’Connell, Rita Connolly, Clannad and The Dubliners.

Following the break-up of his first marriage in 1978, Thom returned to the US where he continued to write and perform, earning a living as a teacher of English grammar at a machine stenographers’ school. The signing of the Intermediate Nuclear Forces (INF) Treaty between the US and USSR in 1988 reignited his interest in Slavic culture and language, and he subsequently moved to Votkinsk in Russia where he worked as an interpreter-inspector at the permanent INF monitoring site.

In Russia he fell in love with and married Lyuba Koroleva, a Russian interpreter-escort in 1992. In 1993, he quit his government job and became professor of English at the Udmurt National University in Izhevsk.

Thom’s linguistic talents continued to flourish in his translation of seven books by the Russian dissident writer Yuri Druzhnikov, including Prisoner of Russia and Passport to Yesterday.

Thom finally moved back to Ireland with his new family in November 1995. Sligo had always featured centrally in his spirit and his music and it was a love affair that continued right to the end of his life. His music flourished on his return, his lyrics full of wit and wisdom, humour and humility, expressing a deep empathy for people and place.

He went on to record another three fine albums: Dreamer in Russia, Gorgeous and Bright and Seven Things Aloom, further cementing his reputation as a first class songsmith and singer.

Paul Flynn: I’d crawl over a mountain of nouveau-riche club sandwiches for a nice toastie
4

Sean Moncrieff: Covid has brought out the best in us. It still does
7