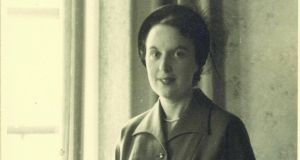 Brighid Malone: made a point of speaking to nursing staff, asking them what small changes might improve their working lives and ensuring that these were implemented.

Brighid Malone, who has died aged 92, was former assistant master of the National Maternity Hospital, Holles Street, Dublin, and the first woman to hold the post. She later established a practice in Dún Laoghaire, Co Dublin, before her career as an obstetrician came to an end due to the public service marriage ban.

During her three years as assistant master, she obtained her master’s degree in obstetrics from UCC and, together with Dr Kieran O’Driscoll, who later became master of Holles Street, published a paper in the British Journal of Obstetrics and Gynaecology reviewing the causes of 300 maternal deaths in the Dublin maternity hospitals from 1940 to 1950.

In later years she would recall how as a junior doctor she would go out on the district assisting midwives with difficult home births in slum dwelling where she witnessed conditions of appalling poverty.

Born in Limerick in 1920, she was the daughter of Robert Quinn, a civil servant, and his wife Maura Garvey, a teacher. Her early years were spent in Dublin, and when she was 12 the family moved to Cork, where she attended St Mary’s secondary school, Charleville. She matriculated in 1936 and entered medical school where she was one of only a handful of girls in the class. She was a member of the UCC camogie team that won the inter-varsity Ashbourne Cup, and also swam for the college.

She graduated in 1942 at the age of 21. After a six- month stint at Holles Street, she worked for two years in the Women’s Hospital, Liverpool, under McIntosh Marshall who pioneered the lower segment Caesarean section and the vaginal hysterectomy. Having spent another year in general surgery in Chester, she returned to Dublin.

On leaving Holles Street, in 1951 she set up in practice in Dún Laoghaire with admission rights in St Michael’s Hospital. In 1952 she sold her examination couch to a young gynaecologist Dr Karl Mullen, and married Seán Malone, consultant neurologist and psychiatrist at the Mater hospital in Dublin.

She went on to have seven children. However, she maintained her connection with the National Maternity Hospital and in 1956 was appointed to the board of governors. During her annual visitation to the hospital she made a point of speaking to nursing staff, asking them what small changes might improve their working lives and ensuring that these were implemented.

During the 1960s she undertook sex education in girls’ schools and on pre-marriage courses. She was much in demand for her down-to-earth talks and friendly approach.

The family home was in Brighton Square, Rathgar, birthplace of James Joyce, and in the 1970s she was elected chairman of the residents’ association, a position she held for nearly 20 years. Her interest in sport led her to take up horse riding and golf in middle age, and she was a keen supporter of the Irish rugby team.

She also took French lessons, and had a special love of Connemara, its people and the Irish language. She is remembered for her generous encouragement and fostering of talent, both within and without her family. The arrival of grandchildren brought her a new lease of life.

Predeceased by her husband in 2003, she is survived by her daughters Marian, Geraldine, Róisín and Niamh and sons Seán, Kevin and Niall.