Brendan Parsons, 78: ‘How many rooms are there in the castle? It depends on what you call a room’

The Generations series, charting the experience of Irish people through the decades, by Rosita Boland, reaches 70-year-olds in Saturday's Irish Times. Here we preview the voices from that decade with the seventh Earl of Rosse

Brendan Parsons, the 7th Earl of Rosse speaks about being 78 years of age and his love of his home Birr Castle, its magnificent gardens and demesne. Part of our Generations series by Rosita Boland for The Irish Times. Video: Bryan O'Brien 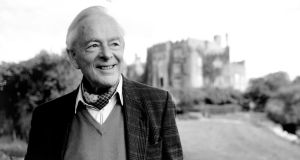 In conversation with Rosita Boland

Brendan Parsons is the seventh Earl of Rosse and the current custodian of Birr Castle, Co Offaly

How many rooms are there in the castle? It depends on what you call a room. There are nominally 23 bedrooms, but some are used for storage.

I was born in London before the outbreak of the second World War and brought up largely in Yorkshire. I was five when I came to Birr for the first time. I remember loving the size of the gardens, and sleeping by myself in this enormous four-poster bed in a room I was told not to call the “haunted room” although everyone else called it that. I loved the freedom of running round. I was closer to my parents here. In Yorkshire I had a nanny.

It wasn’t until very much later that I became aware that one day I would be taking over responsibility for Birr.

I went to Eton at 12. I was put into a house where I was the only person from outside Britain. I was seen as the Paddy and certainly not accepted on the same basis as everyone else. One was referred to as the Paddy.

The whole emphasis at Eton was to get one to conform; to be good at sports, which I hated, and not to be doing anything seen to be sissy, such as going off for music lessons, which I loved.

After a year there I was diagnosed as having a touch on the lung and prescribed a pint of Guinness a day and a year in the mountains at a school in Switzerland. My room was in a little turret, with a Porteguese boy on one side and a Palestinian on the other. The common language between us was French. That was where I really found my feet and realised the world was bigger than the one where one had to conform as a very British boy. It made me appreciate other cultures and languages. I was tremendously happy in that school, but I was only there for a year.

I went back to Eton for one term. Then I was sacked. Expelled. I was expelled for quite badly cutting up the face of someone who had been [making my life a misery], one of many . . . [Being expelled] was a huge relief. I was subsequently sent to a crammer in the north of England. My father didn’t understand it, because he had had a very different experience at Eton in a different era, and my mother couldn’t understand it, as she had never been to school; she was brought up by governesses and tutors.

After school I went into military training. I was lucky enough to be in the Irish Guards for three years, joining the regiment that my father had served in during the second World War and in which my grandfather had fought and been killed in the first World War.

I didn’t at that stage have any clear idea about the career I wished to pursue, but I was happy to follow the pattern set by my father and grandfather. I started in Egypt and Jordan, then very briefly with the Arab Legion, Switzerland and Austria. I managed to get on to the army ski team. That’s the only sport I’ve ever been really good at.

I was only 21 by then, so I went on to Oxford. I met my wife, Alison, there. After Oxford I joined the United Nations, at the beginning of the 1960. The role was described as a reports officer. I was assigned to Ghana for the first two years. It was my job to go round visiting the UN projects and assess their success. I was assigned to what is now called the United Nations Development Programme in the field.

I stayed with the UN all through the 1960s and 1970s. My years in the UN have given me the greatest professional satisfaction I’ve had in my life. I was taught to serve.

Our three children were born in three different countries. I served in west Africa, New York, Iran, Bangladesh and Algeria. I’ve lost most of my languages now. All I’ve kept are French, Persian and Bengali.

We kept in touch with home and Birr by letter. One wrote letters regularly in those days. We have those letters, both sides of the correspondence, in our archive here in Birr. I think it’s sad now when our children and grandchildren correspond by telephoning.

The Bengali banking system in Bangladesh helped me have a better understanding of Irish banks. I came back to a situation where this whole estate was in trust, and the principal trustee was the Bank of Ireland, which was appointing itself to act as banker, and I don’t think I probably need say any more.

The estate now is about 900 hectares, which is literally 9 per cent of the estate my father inherited. He inherited 9,000 hectares, although most of that was bog. Most of the great estates were broken up when the tenancies were redistributed under the Land Acts. There was no incentive for either party to improve the land, and I bear no grudge at all.

Now that I am in my 70s what I’m aware of is that I’ve had more than three-quarters of a century on this earth. I ask myself if I have used it wisely and productively thus far, and what I should focus my remaining years on. I’ve tried to define that in terms of my responsibilities, helping to focus this country more on parts of its heritage and planting trees at Birr for future generations.

The demesne, which has the telescope at its centre, has always been open to some people, and it’s now open to an ever expanding number of people. We used to get 12,000 visitors a year, and now it’s between 50,000 and 60,000 a year. I love to see visitors enjoying the gardens. There are 55 hectares open to the public. We don’t need all the gardens for ourselves. I’m only sad when I see small numbers of people dropping litter.