Board games come out of the closet

Forget the boredom-in-a-box games of your youth: the exciting new breed have names such as Zombicide, Shadows of Brimstone and Kingdom Death: Monster 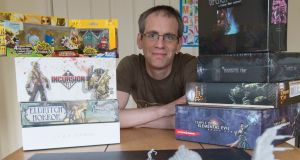 Ed Power: “To me, €300 (plus shipping) splurged on a good board game is a bargain compared to, say, €70 blown on Call of Duty: Black Ops.” Photograph: Brenda Fitzsimons

Last year I spent €300 on a board game. It was delivered in a groaning monster of a box, by a courier who looked as if he had passed out twice hefting it up my driveway. Within were dozens of intricate plastic figures that had to be worked free with a knife and, using what was left of my fingers, assembled with glue (I am halfway there, not including the pieces lost, trampled on or ingested by my children).

When I tell people this – as you can imagine, I often don’t – they flash me a look that says they are on the brink of laughing but have caught themselves in time. Well, whatever. To me, €300 (plus shipping) splurged on a good board game is a bargain compared with, say, €70 blown on Call of Duty: Black Ops or however much a Sky Sports subscription is nowadays. A board game can be enjoyed ad infinitum – longer, if there are miniatures to put together.

I am not alone in feeling this way. Board games are booming in popularity. Most Irish cities now have at least one dedicated shop. YouTube shows such as Wil Wheaton’s Tabletop – in which the former Star Trek actor and sundry celebrity friends get stuck into a popular new release – draw hundreds of thousands of viewers.

It has even been reported that Angelina Jolie and Mila Kunis are fans of second World War strategy game Axis and Allies, although when I went to fact-check this nugget online, all details had mysteriously vanished. Perhaps the notion came to me in a glue-induced hallucination.

To be clear, when I say board games are booming I mean board games that are fun to play. Forget about Monopoly, Trivial Pursuit and Battleship. As anyone who was forced to bond with siblings over an interminable Sunday afternoon Connect Four session will testify, mass-market games are boredom-in-a-box.

Cast your mind back to childhood and you will probably be able to recall a marathon game of Monopoly so dreary it felt time had ceased to move forward and had perhaps even gone into reverse. It was as if the game had been created specifically to introduce eight-year-olds to the concept of ennui.

Modern board games are different. They have exciting, heavy metal-esque names such Zombicide, Shadows of Brimstone and Kingdom Death: Monster (the one that cost me €300).

The production values are top rank. And they encompass every theme imaginable, from fantasy to science fiction via sports, historical conflict, time travel, agriculture, romance and the “underground railroad” by which antebellum slaves were smuggled to Canada. Someone is even working on an insanely complicated simulation of the War of Independence called A Terrible Beauty (you can play as British army, the RIC, or “hardline” or more moderate republicans).

“Tabletop games are just so much better now than most people remember,” says Nate Brett of the Board Game Hour podcast. “Gone are the bad old days where your options were Monopoly and Trivial Pursuit, both of which are deeply flawed games which I strongly advise against you ever playing. Now there are games to fit almost any taste. You pick what you want out of a game, or suggest a theme that might interest you, and I can pretty much point you towards a game you most likely will love.”

Ronan Murphy, who runs Galway gaming cafe Dungeons and Donuts, thinks “the recession may have helped. People didn’t have the money to go out for a meal or to the pub. It costs nothing to go over to a friend’s house and play one of their games. Geek culture has become mainstream. Star Wars, Game of Thrones – stuff like that was always out there. But now everybody wants it. Nerd is not a derogatory term any more.”

According to Sean Shortis, joint owner of Black Kat Games in Kilkenny, “Once you get into the hobby you never really fall out of it. Maybe your circumstances change and you no longer have time for games. But you’ll always want to play if there is the opportunity. That’s the remarkable thing about gaming.”

Shortis opened Black Kat after losing his job at the local HMV. He was initially dubious whether Kilkenny’s gaming community was large enough to support a shop. Two years on, business is good.

People wander in looking for Game of Thrones or Star Wars merchandise, which Black Kat also stocks, and are seduced by the endless rows of board games, crying out to be played.

“The idea was to make the store ‘mammy friendly’, for want of a better description,” he says. “There is this idea that gamers play in dark and dingy rooms. We wanted to correct that stereotype. Black Kat is bright and airy.”

Where should the budding gamer start? For the newcomer, Ronan Murphy recommends Ticket to Ride, in which players compete to build railway track across a map of 19th-century America (or, if you are willing to pay extra for an expansion board, Victorian Ireland and Britain).

But don’t worry if that sounds too dry and sensible. There are Star Wars games, zombie games and games that unfold in alternate versions of the second World War in which the Nazis stomp around in giant robots and the Allies send bionic apes into battle. Come on: bionic apes.

In Kingdom Death: Monster, meanwhile, the player oversees a dystopian settlement where survivors armed with clubs and primitive swords hunt nightmarish fiends. You might think that sounds like the worst premise ever. Or – if you are partial to Game of Thrones or Star Wars, say – maybe you think it is drool-inducingly cool (in case you are wondering, the wince- inducing price is a reflection of Kingdom Death’s limited retail run and luxurious production values).

“Playing games is in our nature. Everyone enjoys play on some level,” says podcaster Brett. “As human beings we need lots of social interaction, and games are a perfect way to facilitate that. Why tabletop games? Well, people in modern life are becoming increasingly disengaged from each other on an interpersonal level.

“The term ‘social media’ is one of the most misleading phrases in modern times. Networks like Facebook are giving us virtual relationships, that to an extent trick us into thinking our needs are being met when in fact many people are lonely. Deep down we need real contact with people, and games offer a great reason to socialise as well as structuring that interaction in a way that makes it easier.”

Ronan Murphy adds: “A lot of people think we’re just a donut shop. Then they walk in and see all these cool games and they’re intrigued. They want to know what’s going on. There used to be a perception that gamers were these people sitting in their dank caves rolling dice. Now gaming is out in the open and everyone can see how much fun it is.”

Richie Sadlier: I’ve learned the best strategy for me is to limit my thoughts to today
8

Coronavirus: 12 of your questions answered by experts
10