Bloomsday: Searching for the spot in Howth where Molly Bloom said ‘yes’

Hilary Fannin: Catching peace in communion with the past on a warm day in June 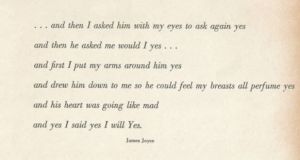 I thought of Molly and Leopold and the bulky machinery of tweeds and corsets, of petticoats and garters on a warm day in June. Where were they, I wondered, when she said ‘yes’?

“. . . the sun shines for you he said the day we were lying among the rhododendrons on Howth head in the grey tweed suit and his straw hat the day I got him to propose to me yes . . .”

I went on a guided walk around Howth Hill with an old friend, Shane. We met up outside a local bistro. He was sitting in the sunshine drinking coffee, his Hungarian viszla by his side. A Velcro dog, he told me, that likes to stick to people; a neurotic dog, he said fondly, that needs a lot of reassurance.

I followed Shane and the dog up through the village. A canteen of water slung across his shoulders, a pennant on a walking stick that read “Shane’s Howth Hikes”, you wouldn’t have mistaken him for a man who spends his working life tethered to a desk.

We walked uphill past the Haggard and a puzzle of pretty whitewashed cottages, tasteful ceramics on their windowsills.

Many years ago now Shane was the victim of a random knife attack in Dublin, which nicked very nearly killed him

Long ago, when Howth Hill was farmland, long before the advent of four-wheel drives and friendly bistros and needy viszlas and extravagant architecture, animals gathered for sale and slaughter here, mewling and bucking on these narrow lanes, hoof on stone.

We came to a clearing, turned to view Ireland’s Eye and Lambay Island, their shapes and colours so familiar to me that it feels as if they have been crouching by the exit all my life, waiting to pounce and drag me home again.

Shane reassembled them for me now, bringing me back to AD 819 and the first wave of Vikings to land there. Leaving the tinkling marina, the fish-and-chip shops and the pretty young things posing for selfies by bobbing trawlers far behind us, he talked about Norsemen and Normans, about Grainne Mhaol and gun-running, and of the antecedents of the St Lawrence family, who are here still, in Howth Castle, custodians of tracts of this alluring, secretive place.

He pointed out the church ruins on Ireland’s Eye, to which old Howth souls once flocked, battling great grey seas for redemption.

We walked on uphill, past a couple of pouting haciendas, stone-clad eagles decorating their theatrical gates. We swung away from the ambitious habitations, climbing through an uninhabited heathland of gorse and fern, then stopped on Dun Hill, looking at a landscape cut from ice, unchanged for centuries.

We dropped down to a forest of birch, the light underfoot falling like a broken jigsaw.

The Japanese bathe in forests like these, Shane told me, believing in the power of the dappled light to calm the heart. Beyond the forest, the track laced with edelweiss, we found ourselves walking through purple heather.

The rhododendrons, when we reached them, were breathtaking, brilliant in their botanical madness, in their shout of colour, in the power of their thick bronze-brown twisted trunks. We stood back, marvelled at this Siamese jungle growing out of black Irish earth.

I thought of Molly and Leopold and the bulky machinery of tweeds and corsets, of petticoats and garters on a warm day in June

We visited Aideen’s Grave, a tomb more than 5,000 years old, a portal between two worlds. We stopped to talk about druids and witches. Two little girls clambering over the sloping dolmen stopped to listen. Even Shane’s dog took a moment to sniff the cold, shadowy earth before it unearthed the girls’ fluffy little terrier and chased it around in galloping circles.

We went then up the fairy steps to where we could see a hawk hanging above Muck Rock.

It’s strange to write this in light of the recent news from London, but many years ago now Shane was the victim of a random knife attack in Dublin, which nicked his aorta and very nearly killed him. It took him a long time to heal from the physical injury, longer still from the mental trauma.

Standing on a precipice above the city, the Mournes to our right, the Wicklow Mountains to our left, Shane told me that, for him, recovery came from the awareness of our fleeting impermanence and ultimate smallness in a timeless landscape, from a peace found in catching a communion with the past.

I looked out over the carved light at an abiding vista unravelling over sand and gorse and forest and sea.

I thought of Molly and Leopold and the bulky machinery of tweeds and corsets, of petticoats and garters on a warm day in June. Where were they, I wondered, when she said “yes”? What spot did they choose to shelter from a century newly born into an ancient past?