Vogue Williams is not an idiot, she’s a sinister totalitarian

Opinion: The model’s column said extremists should be locked up. Don’t dismiss it as stupid 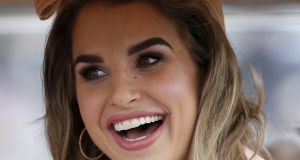 Vogue Williams has, in the wake of the London Bridge attack, come out in favour of interning suspects without trial. There has been a predictably patronising, borderline sexist response to her column in the Sunday World. Just because Williams, a Dubliner, came to fame in reality TV shows such as Fade Street, Dancing With the Stars and Stepping Out people are assuming she doesn’t know what she’s talking about.

The fact that she was once married to pop star Brian McFadden – who, last week, urged Isis to fight us “face to face” – was enough to trigger endless tweets calling her clueless. More than a few felt that printing the article beside a photo of the author in a swimsuit trivialised its content.

All this is most unfair. I do not know Vogue Williams. I have no previous knowledge of her political leanings. But she is writing a column in a national newspaper and, thus, deserves to be treated as seriously as any other commentator.

We should not call her an idiot. We should calmly point out that her views are illogical, totalitarian and profoundly sinister. Her column should be considered alongside the right-wing provocations of Ukip and Breitbart media.

The word “police state” is slung around too liberally in online discourse, but locking up suspects without trial surely constitutes one huge step in that direction. That is what Williams is proposing.

She references Tarique Ghaffur, a former assistant commissioner with the London Metropolitan Police, as arguing that: “Thousands of radical extremists must be locked up in new internment camps to protect Britain.”

Don't assume Vogue Williams is stupid. Do her the credit of finding her views totalitarian, oppressive and genuinely sinister. pic.twitter.com/i3Wz5tVvfR

As a columnist who often writes through my hole on big issues, I'm still baffled by how Vogue Williams decided she would 'tackle terrorism'

Vogue Williams using her column to call for the internment of all Muslims reminds me that we're all just living in a computer simulation.

Lots of support on Twitter for Vogue Williams internment comments. Who knew us Irish were so desperate to bring back internment?

Recalling Joseph McCarthy’s famous “I have in my hand a list of 205 … members of the Communist Party”, Williams numbered the potential detainees at around 3,000. As these were “far too many to keep a close eye on” the authorities should just bang them up.

Nothing does more to quell dissent than the suspension of due process. Right? Think how Guantanamo Bay burnished the United States’ reputation as a beacon of liberty. Recall how the introduction of internment in Northern Ireland helped win over so many hearts and minds in the nationalist community.

(If you are as stupid as too many people accuse Vogue Williams of being then allow me to clarify that I’m being sarcastic.)

Williams didn’t dodge the Irish precedent. “I know it didn’t work with the internment of IRA members in Northern Ireland,” she wrote. “But in today’s case the terrorists cannot be negotiated with. They want to ruin the western world and they will stop at nothing to do this, so we need to have the same approach with them.”

The first part of this argument makes no sense. The second confirms Williams’s political stance as deeply disturbing. Nothing more effectively drove Republicans away from negotiation than the introduction of internment.

Her argument that “we need to have the same approach” as a nihilistic, brutal death cult travels so far outside mainstream discourse that it scarcely allows rational engagement. In what other ways does she want us to follow Isis’s example? Further columns will no doubt explain.

To be fair, Williams does pull back from cask-strength fascism in one crucial sentence. “This is something that should be decided on by the people,” she argues.

There is little chance of a referendum on the subject of detention without trial, but the UK is having a general election on Thursday. Sadly for the Vogue Tendency, none of the major parties is arguing that the UK state should “have the same approach” as Isis. Oh well. There’s always next time.

She and her allies can stand on that ticket. We will listen attentively. We will not call them stupid. That would be letting them off the hook.

Yes, having ‘just’ the one child can make for a wonderful family dynamic
7

Michael Harding: I was in my underpants, finishing off the pint...
9