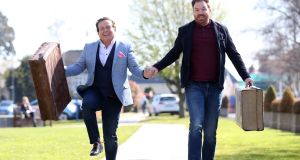 How early do festivities in the O’Shea household kick off?

We have three small children, six, four and two – that’s not their names now, that’s their ages – and they were talking about Christmas in September. My wife loves Christmas and I like it too, I have to say, so I’d imagine our tree will be up by December 1st.

We don’t do real trees. We made that mistake one year, and the kids can’t leave it alone. We call our tree the “midway tree” – it’s decorated from the top to the middle because they’re like cats, they just go mental with it.

My wife writes out what she wants for Christmas and she says every year: “You never get it for me.” So one Christmas, I was in a queue to get her earrings with all the other men who decided to leave it to Christmas Eve and she said: “Don’t get me jewellery now, you know I don’t wear jewellery.” That kind of wife is a pain, she doesn’t like perfume or jewellery – y’know, the stuff that’s easy. Anyway, on the way home I was driving past a DIY shop and she’s always saying “Oh, I’d love an ash hoover for the fire. . .”

Your friendship with Marty Morrissey has been well documented . . . what will you be buying him this year?

God, what do you get the man who has everything? For someone who travels an awful lot, I’ve never been a fan of his washbag. I’ve told him several times that I’m gonna get him a new one, but he says no. He loves aftershave; he’s probably the best-smelling man in Ireland. So I’d probably get him a decent bottle of aftershave. But some day, I will get him a new washbag.

Who’s on your naughty and your nice list this year?

Well most definitely, the coronavirus is on my naughty list – it’s just a pain in the ass. On my nice list? It’d have to be my wife, because she puts up with me. Well, it’s between my wife and Marty, to be honest.