At Christmas, ‘nice’ women take on the ‘emotional labour’

Broadside: Who does the ongoing, thankless admin that ensures a harmonious home? 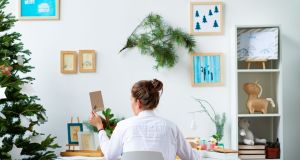 Ho-ho-no-no: “Christmas is a time for giving, for generosity. Yet more often than not, it’s women who disproportionately shoulder the festive load.”

Christmas: the season of goodwill, merriment and tradition carved in stone. Picture it in your mind’s eye (or, if you’re lazy, watch a Christmas advert) and you will no doubt see a mother pull a plump turkey from an oven like it’s her first-born, and a father grappling with fairy lights and lugubriously lugging a tree up the driveway.

Whatever about the rest of the year, the festive season is, in the spirit of ritual passed from generation to generation, when we often revert back to more conventional roles. It’s a time for giving, for generosity. Yet more often than not, it’s women who disproportionately shoulder the festive load.

You may or may not have heard of “emotional labour”. The term was first coined in 1983 by academic Arlie Hochschild in her book The Managed Heart. But there’s something quite timely about this idea, not least in the era of the two-income household.

In the main, emotional labour is the sort of work in which one is required to display specific, benevolent emotions towards others. Think of the sort of insidious duties that women tend to automatically shoulder: arranging playdates for kids, remembering birthdays, sending a Christmas present to the in-laws, sorting Rice Krispie cakes for class, remembering dinner party wine.

In short, the ongoing, niggling, thankless admin that ensures the harmonious running of domestic life.

Sounds like I’m generalising greatly, yet figures back it up. Globally, women spend an average of 4.5 hours a day on unpaid work while men spend less than half that much time.

According to a recent Pew Research Centre study of families with two full-time working parents, men said they shared caring for sick children, managing kids’ schedules and housework with their partners equally, while women were more likely to say they were the ones spending more time on these tasks.

This emotional life admin often falls to women for a number of reasons. Ostensibly, they are natural people pleasers. Women are usually raised to be “nice” in the world. Another factor, according to research from the University of Warwick, is that women believe their male partners to be terrible at housework and they’d rather do it themselves.

Women are just better at this stuff, we’ve been told for years. Again, every ad break for the past three decades has reinforced this domestic trope: the naturally able and diligent housewife, and the enthusiastic but ultimately incapable man at her side.

Suddenly, remembering birthdays and writing thank-you letters became “female” jobs; stuff women did uncompensated, out of the goodness of their hearts.

Some have called it another “hidden tax” that women have to shoulder; others note that many women are said to enjoy this “emotional labour”. It helps us feel in control of our lives, apparently.

But the language is problematic, turning as it does the politesse of remembering your kid’s teacher’s name or acknowledging a family birthday into actual work. Surely it’s just being nice and considerate, in the same way that housework is . . . well, just tidying up after yourself, really?

Ultimately, if you don’t want to send a thank-you note or keep in touch with an elderly relative, simply don’t do it. Don’t feel obliged to on account of your gender. If you want to add to your to-do list to enjoy the warm thrill of being a nice person, do it. But don’t resent others for not doing it.

As for the idea of men’s learned helplessness around the house, a quote by author Kathy Lette comes to mind.