Activist who brought theatre to a Belfast working-class audience 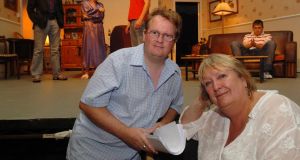 Pam Brighton, who has died aged 68 in her adopted home of Belfast, was a Yorkshire-born theatre director who was central to developing people’s theatre in west Belfast.

She mentored almost a generation of the city’s playwrights and actors, and was a founder of the innovative DubbleJoint company.

Brighton’s theatre was about making the voices of the voiceless heard. She had little interest in directing classic texts and preferred working outside the established theatre. Her commitment was to making theatre relevant and accessible to working-class people, a position which flowed from her Marxist beliefs. In her later years she specialised in work which articulated the feelings of Catholic west Belfast.

Brighton was an excellent script editor, because she could spot the flaws in a script. Another gift was the ability to find nuances in a character which the playwright hadn’t identified.

Pamela Dallas Brighton was born in Bradford, Yorkshire in October 1946, the only child of Norman Brighton and his wife Marjorie (née Peel). Norman Brighton worked in a garage, installing insulation in vehicles. He died of asbestosis when she was 15.

After graduating, she worked at London’s Royal Court Theatre, in charge of its Young People’s Theatre Scheme. The language used in some productions provoked protests from the Inner London Education Authority, and questions in parliament.

After leaving the Royal Court she worked at other theatres in London, Toronto, and Stratford (Canada), with some forays to Australia. She lived in Canada for a number of years.

A couple of times, she seemed to be on the verge of mainstream success only to have it elude her. Her complex personality and honesty did not help. A Toronto newspaper interviewed her the day before one production opened. She said: “It’s very depressing to do a play that’s terribly flawed. But there’s no use pretending it’s good when it isn’t.”

Marie JonesStones In Our Pockets

She came to Belfast by accident. She met playwright Martin Lynch at the Edinburgh Festival in the early 1980s. He needed a director for a play he had written for the Charabanc theatre company. She came over, found west Belfast was a home, and moved there permanently in the late 1980s. For a while she worked there with the BBC’s drama department. However, she was not a woman who fitted into such a structured organisation.

At one stage she abandoned theatre altogether and qualified as a barrister in 1986, working for a while in the human rights field. The sirens of the theatre called her back, though, and she answered them. She is survived by her son, Ned Cohen, daughter-in-law Jeanette, and grandchildren Oisín and Dearbhla.

Pollan is unique to Ireland so why don’t we eat more of it?
7

When it comes to decadent dressings, all kale Caesar
8