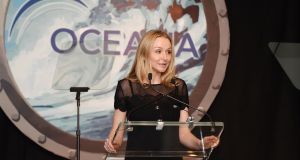 Environmental activist and advocate on the conservation of water, Alexandra Cousteau has spent her life at sea. Photograph: Andrew H. Walker/Getty Images

“There are a lot of women explorers out there who haven’t been recognised for the incredible things that they have contributed to how we understand our world,” she told Kathy Sheridan in the latest episode of The Women’s Podcast.

One of those women was her own grandmother, Simone Cousteau, who received the French maritime medal of honour for sailing more miles than any other woman in history.

“She was an extraordinary woman. My grandfather wouldn’t have been able to do everything that he did if she hadn’t been by his side, especially in the beginning. She sold her jewels to be able to finance the first expeditions of The Calypso,” she said.

An environmental activist and advocate on the conservation of water, Cousteau has spent her life at sea and was taught how to scuba-dive when she was just four years old by her famous grandfather who invented the pursuit.

She went on her first expedition at sea as a baby, on an amphibious plane with her father the explorer Philippe Cousteau. “Some people love to go camping with their children… this is what we did,” she said.

You can catch Alexandra Cousteau at the Bord Gáis Energy Theatre in Dublin on Sunday, April 23rd - the day after Earth Day – when she will speak about her remarkable life and work to date and of course her pioneering family.

Also on the podcast, player with the Irish women’s senior football team, Louise Quinn, spoke to Róisín Ingle about the team’s press conference at Liberty Hall in Dublin on Tuesday, where they aired their many long-standing grievances about their treatment, particularly when compared to the men’s teams.

This morning the FAI announced that following mediation overnight, agreement had been reached on all of the issues highlighted by the players – they included the right to keep their tracksuits, access to proper resources such as nutrition, and more frequent training for players based in Ireland.

Speaking to the podcast ahead of those talks, Quinn said Tuesday’s press conference was “a really tough day for us but also a really proud day,” because they were taking the action not only for themselves, but for players coming up behind them.

“We just want to be on the pitch, we love doing it, but it’s also why we are doing this too. We’re doing it for the future of the Women’s National Team and the future of Irish football and women’s sports in general,” she said.

To listen to the podcast, go to iTunes, irishtimes.com/podcast, or your preferred podcast app.