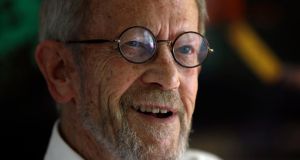 A full measure of recognition came to writer Elmore Leonard, who has died aged 87, rather late in life. When Stick was published in Britain in 1984, one newspaper called it “a fine first novel”. It was, in fact, his 21st novel, and he had been selling his fiction regularly, occasionally to Hollywood. But the genres in which he chose to work – westerns and crime fiction – often failed to attract serious critical attention.

Westerns still lack respectability, but the craft and energy of Leonard’s crime novels, which include Get Shorty, Out of Sight and LaBrava, eventually made them impossible to ignore.

In 1998, Martin Amis, in the course of a somewhat idolatrous interview with Leonard at the Writers’ Guild in Beverly Hills, declared him “as close as anything you have here in America to a national novelist”. He also revealed that Saul Bellow had Leonard’s work on his bookshelves.

American south
Leonard was born in New Orleans. His father was a General Motors executive whose job entailed a nomadic existence. The family spent the first 10 years of Leonard’s life travelling the American south, and he retained traces of a southern drawl.

After war service in the naval reserve, he graduated with an English degree from the University of Detroit. For 11 years from 1950 he worked as an advertising copywriter, mostly writing car ads.

Interviewed years later, he pronounced adverbs in fiction a sin: “I used up all my adverbs when I was writing car catalogues for Chevrolet.” Getting up at five every morning and writing fiction for two hours before going to work, he maintained a decent output without relying on it for an income.

By 1967 he was selling enough fiction to abandon advertising. He got $4,000 for the screen rights of his story 3:10 to Yuma, filmed by Delmer Daves in 1957. (The film was remade in 2007 with Russell Crowe and Christian Bale. ) His 1961 novel Hombre was filmed in 1967 by Martin Ritt, with Paul Newman among its stars. Although he got $10,000 for the screen rights to that story, Leonard realised the market for westerns was running dry.

To call Leonard’s style a formula would be to cheapen it, but when he departed from it, the results were less convincing: Touch (1987) was a bizarre fable reflecting his discovery of Christianity and his renunciation of alcohol, while Cuba Libre (1998) was a kind of Cuban western. Touch, Get Shorty (1990), Out of Sight (1996) and Be Cool (1999) were all adapted for the cinema; Out of Sight also spawned a TV series, Karen Sisco.

Ten Rules of Writing
In 2001, the New York Times published Leonard’s Ten Rules of Writing, folksy but well-considered advice, and not only for those who wanted to write like Leonard: “Never open a book with weather”, “Keep your exclamation points under control” and so on. He added: “My most important rule is one that sums up the 10: if it sounds like writing, I rewrite it.”

Leonard made it sound easy, but of course it wasn’t. He may not have been an innovator, but his best novels were a more accurate barometer of contemporary America than the respectable profundities of “quality” fiction, even if it took the critics 30 years to catch up with him.