A ‘Steeler’ who scored big as US envoy to Ireland 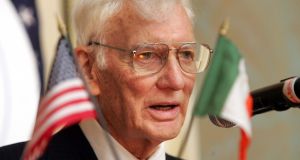 Dan Rooney, who has died at the age of 84, was famous in his native United States as the owner of the most successful American football team, the Pittsburgh Steelers, and in Ireland as a great philanthropist, a supporter of Irish cultural, educational and charitable causes, and, late in life, as US ambassador.

Two days after he arrived as Barack Obama’s first ambassador to Dublin in 2009, he threw out the first pitch at a baseball game organised to mark the Fourth of July celebrations on the lawn of Deerfield, the ambassadorial residence, and was heard to remark: “Why isn’t this football we are doing?”

Thereafter, for the next three summers that Rooney was the Obama administration’s ambassador to Ireland, he hosted the annual Irish American Flag Football Classic between the Dublin 8s (named after the residence’s post code) and the Phoenix Park Pirates named after his beloved team back in Pittsburgh.

The oldest of Steelers founder Art “The Chief” Rooney’s five sons, Rooney was immersed in the team almost from birth. His father, a boxing promoter, bought the Steelers (then the Pirates) in 1933, the year before Dan was born. The young Rooney learned all aspects of the business of American football, starting out as the team’s water boy and working most jobs in the team’s front office. In 1975, he took over as president from his father who remained on as chairman until his death in 1988.

Even as a student, he added to his knowledge of the game on the field by playing quarterback in his youth at North Catholic High School in Pittsburgh and offering advice to players in contract negotiations when he was studying for a degree in accounting at Dubuquesne University, also in Pittsburgh.

In 1969, he convinced his father to appoint Chuck Noll as the team’s coach. It was a hire that would help turn the Steelers from long-time lovable losers into a powerhouse franchise of the NFL. Noll led the team to a four of the team’s six Super Bowl titles, the most won by any team in the league. Smart picks in player drafts created a team that dominated the game in the 1970s, winning the Super Bowl in 1974 and 1975 and again in 1978 and 1979. The team has also won eight American Football Championship division titles and enjoyed a resurgence in more recent years, winning Super Bowls in 2005 and 2008.

He brought his no-nonsense management approach to the wider NFL too, earning widespread respect in the league. He encouraged diversity and inclusion by pushing for what became better known as the Rooney Rule, which requires teams to interview at least one black or ethnic minority candidate for the role of head coach. The percentage of African-American head coaches rose from 6 per cent before the rule came into effect in 2003 to 22 per cent three years later.

“Few men have contributed as much to the National Football League as Dan Rooney,” said the league’s commissioner Roger Goodell. “A member of the Pro Football Hall of Fame, he was one of the finest men in the history of our game and it was a privilege to work alongside him for so many years.”

The grandson of an immigrant (also Daniel) from Newry, Co Down, Rooney together with Anthony O’Reilly established the Ireland Fund, an educational and philanthropic organization in 1976 with the objective of promoting peace, culture and charity. Concerned about the potential for the Provisional IRA to raise funds from Irish-Americans in the US, O’Reilly felt he could tap Americans of Irish descent, mimicking the support provided by Jewish Americans to Israel, for money that might be used to support both nationalist and unionist communities and for integration and reconciliation.

The Ireland Funds, as the organisation has grown to become today, has raised more than $550 million (€519 million) in 12 countries for 3,000 non-profit organisations in Ireland and overseas, making it one of the biggest private fundraising groups supporting Irish interests. “Together with his co-founder Tony O’Reilly, Dan was the soul and safe of this organisation,” said New York hotelier John Fitzpatrick, chairman of The Ireland Funds America. “Thousands have benefited from his care and concern.”

Although a lifelong Republican, Rooney was an early supporter of then US junior senator Barack Obama and helped the Democrat win over key blue collar areas in Ohio, Virginia and Pennsylvania in his 2008 presidential election victory. Obama repaid him by naming him ambassador to Ireland in 2009.

He took up the job shortly before his 77th birthday with two key objectives: visiting each of the 32 counties on the island and bringing Obama on a visit to Ireland, both of which he achieved by the end of his term in 2012. The holder of a private pilot’s licence, Rooney often flew himself (with an Irish co-pilot) to events around the country, accompanied by often anxious Special Branch Garda detectives assigned to protect a man whose flying exploits back in the US earned him the nickname “Crash Rooney”.

A couple of times each year he flew to Shannon Airport to meet US military personnel passing through on their way to or from active service in Iraq and Afghanistan, handing out cookies made by embassy staff back in Dublin or Steelers pens that he carried with him in his pocket.

“He was always trying to convert the Irish to the Steelers one by one,” said one embassy official who recalled an ambassador who knew everyone’s name at the embassy and regularly ate in the staff cafeteria.

During his time as ambassador, he became close to Mary McAleese in her final years as Irish president and her husband Martin. McAleese recalls attending an Easter church service with Rooney and his wife Patricia at St Peter’s Church in Phibsborough and dropping across the road from Áras an Uachtaráin to his residence to watch late-night Steelers games with guests and popcorn. He was impressed with Rooney’s ability to use his White House contacts to secure visas for a group of former loyalist paramilitaries he brought to the US in 2011 when the consulate in Belfast had refused them.

“He understood the significance of them being there and to be well received as they were in Capitol Hill to demonstrate that Irish America wasn’t totally based on the republican perspective,” he said. “He was really respected because he was decent, humble, passionate and had the right values.”

Rooney’s contribution in Ireland was noted by Obama in a statement released after his death. “I knew he’d do a wonderful job when I named him as our United States ambassador to Ireland, but naturally, he surpassed my high expectations, and I know the people of Ireland think fondly of him today,” said the former US president who called him a “champion-calibre good man”.